G is for... Gift for the Magus

Today's Character is from 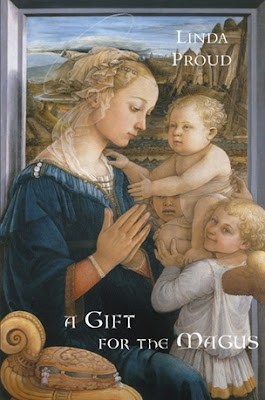 HH : Hello! I believe you exist in Linda Proud's novel – what is the title of the book, and would you like to introduce yourself - who you are, what you do etc?
She called it A Gift for the Magus. It refers to the painting I did as a gift for my patron, Cosimo de’ Medici, the painting so beloved of Florentines that they call it ‘La Lippiana’. I am Fra Filippo Lippi, by the way, friar, scumbag and painter of divine images. I believe Linda was rather taken by the question of how one man can be so many things, in a kind of anti-Renaissance fashion. How, she wondered, can a lying, cheating fornicator paint the Virgin so beautifully? Well, I could have told her that most great artists have a dark side, but why spoil her musings? So her theme was ‘Does it take a good man to be a good artist?’ And given that the answer must be ‘yes’, she went looking for what was good about me.

HH : Where and when are you?  Are you a real historical person or did your author create you?
I am in the first half of the fifteenth century in Italy. I’m as real as they come. There’s a plaque in Prato to prove it, saying, ‘Lippi lived here’.

HH. In a few brief sentences: what is the novel you feature in about?
It’s about how brilliant I was as a painter, how hard done by I was, being thrown into the monastery when I was an orphan child, how elitist and snobbish other painters were, like Masaccio, Donatello, Brunelleschi etc. No one helped me. Apart from the blessed Angelico, and Cosimo de’ Medici, so astute, so very astute as a patron, that I do believe I was his favourite, and he was so very forgiving when I failed to meet his deadlines.

HH :  I ‘met’ my pirate, Jesamiah Acorne on a beach in Dorset, England -  how did your author meet up with you?
Well, she knew my son first. He, Filippino Lippi, was the best friend of the protagonist of her Botticelli Trilogy. Botticelli, of course, was my apprentice. Why he got a trilogy and I only got a prequel, I dunno. It’s a mystery. Anyway, Filippino told the story of his father the friar and his mother the nun, in something of a boastful fashion, because there never was a prouder bastard than my son, and it intrigued her.

HH : Tell me about one or two of the other characters who feature with you - husband, wife, family? Who are some of the nice characters and who is the nastiest one?
Nice characters? The blessed Angelico. I couldn’t stand him, because he was so perfect, you know, perfect in his religion, his painting, his personal hygiene. But he was the only one I cried over when he died, him and Cosimo. Cosimo de’ Medici has been somewhat overshadowed by his grandson, Lorenzo il Magnifico, but he was the powerhouse of the Renaissance. He was the wise man, the Magus. My wife, Lucrezia, she had her moments -- moments hen she was most beloved or supremely annoying. My apprentice, Sandro Botticelli, was a beautiful boy. I had to keep it hidden, how fond I was of him, how I admired his talent, because it was my job to toughen him for the world, and to kick him out of my workshop in the end. Really nasty -- that has to be the Archbishop. Sainted now, Antonino. That’s the sort of thing that intrigues Linda: how some get haloes and some get forked tails, when all along we don’t really know what true goodness is.

HH : What is your favourite scene in the book?
Um. Dancing on the roof of the convent with Lucrezia. I’ll let you into a secret. It’s based on a Tarantella video. The couple in this video: Linda used them to flesh us out in her imagination, and she just about got it right. I was that handsome (oh, ok, chubby but  great) dancer. As for Lucrezia, like …, you could not take your eyes off her. Oh, to see that YouTube vid again brings tears to my Italian eyes.

HH : What is your least favourite? Maybe a frightening or sad moment that your author wrote.
It could be when I got a black eye in return for my amorous advances (what you lot would call ‘sexual harassment’) that made me miss what promised to be the most important event of my life. But really I think it’s when I’m helping one of the nuns give birth in a cellar. That’s my virtue, you see, my inability to ignore anyone in distress, but that scene was truly gross. Ugh - placenta. Ugh, ugh, ugh.

HH : What are you most proud of about your author?
Her name!! Snortle. Choke. Va bene… I was quietly thrilled that A Gift for the Magus was editor’s choice in HNS and runner-up in the Annual Award. It was also the runner up in the Quagga Prize for Independent Literary Fiction. We’re both of us always runners-up when it comes to prizes. We have a lot in common, she and me, and validation by the world is important to us.

HH : Has your author written  other books about you? If not, about other characters?
How do you feel about your author going off with someone else!
Do you know what? She left us! Left the Renaissance! Abandoned Botticelli! Said she’d done it all. As if… Now she’s in ancient Britain in AD 43 as the Roman invade. Does she have a thing about Italian men? Who can blame her? Brava, Linda!

HH : As a character if you could travel to a time and place different to your own fictional setting  where and when would you go?
Oh… I think I’d like to go to a Dionysiac festival in ancient Greece, where that Tarantella probably has its origin, and dance with a Maenad, all sweaty and naked. Si, certo. But on second thoughts … I would love to happen upon the Virgin and Child one day in a glade of the Camaldoli forest. And I would stand before them, and say, ‘What? Me? You would appear before me? Why?’ It’s the answer to that question that is the theme of the novel.