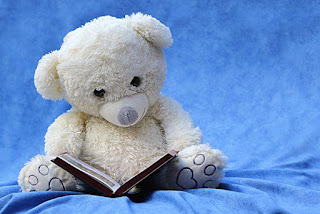 Here you will find various excerpts - the most recent addition (as linked from my newsletter) at the top, but scroll down for more. Note: some may be from pre-publish drafts and contain errors.
* * *
Excerpt From:
Harold The King (UK edition title)
I Am The Chosen King (US edition title)
The story of events that led to the Battle of Hastings, 1066 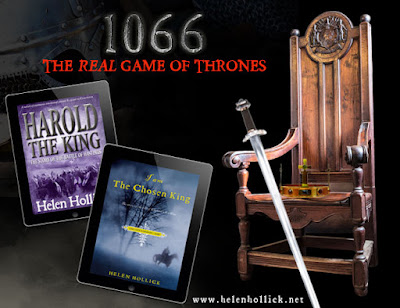 Emma, twice married, twice widowed, Dowager Queen of England, watched her only surviving son dance, tripping and prancing with dainty steps among the boisterous twirl of men and women. With the solemnity of the coronation ritual completed, and the pomp of the banquet ended, the evening celebration and merry-making came most welcome to the guests here within the King’s Hall at Winchester. A pity that the crowned king had to be Edward.

Emma sipped at her wine to disguise the flare of contempt. Edward, her firstborn son, crowned and anointed this day as King of England. She would have to learn to accept it. She took another sip, savouring the richness of the red grape as it warmed her throat, overcoming the taste of bile that rose from her stomach. Accept it, maybe, but she would never come to like it! Edward was as weak and shallow as his incompetent father, Æthelred, had been. How well had the clerics who wrote the history of these things mocked that name! Æthelred, Noble-Counsel – and how soon into his dithering, floundering reign had that been altered to un-raed, ill-counselled?

A thunder of laughter from the far end of the crowded Hall drew her attention. Godwine’s two eldest sons, Swegn and Harold, stood among a group of young men sharing some, no doubt lewd, jest between them. For all their faults – and where the earl and his brood were concerned, there were faults a-plenty – they were sons to be proud of. Swegn might be wild, more interested in the pursuit of enjoyment rather than the demands of decision making, but these faults were outweighed by better traits. All Earl Godwine’s sons were strong, courageous and manly, aye, even young Leofwine, who was but seven years of age. Where was the manliness in her son, Edward? Unable to keep her thoughts to herself, Emma spoke to the man sitting beside her, his hand tapping out the merry rhythm-beat of the dance on his knee.

“I have been wife, and queen, to two men who have ruled England.” Her words oozed contempt. “You would have thought one of them could have sired upon me a man worthy to be called son.”

“My second husband, Cnut, gave me a child of each sex, both of whom had the constitution and life-span of a mayfly.”

Briefly, an expression of regret clouded Emma’s face. To be a queen for over two score years, to rule as regent, survive attempts of murder and the harsh bitterness of exile: such a woman needed to shield her weaknesses from those who would, at the drop of an autumn leaf, oppose her. But Godwine knew Emma well, better perhaps than either of her husbands had done.

Harthacnut, her youngest son, she had genuinely adored. A boy like his father, wise and disciplined, with a sense of duty and purpose; strong of body and mind. How much had she endured for that lad! And for what? For him to die of a seizure when he was but three and twenty, and crowned king for less than two short years.

“The life of the wrong son was ended,” she said softly. Godwine assumed she referred to Harthacnut’s untimely death, winced as she murmured, “It ought have been Edward killed, not Alfred.”

Godwine made no comment to that. Emma had borne two sons to Æthelred: Edward and Alfred, and Alfred was a name that still conjured difficult memories that brought the blood stealing into Godwine’s cheeks. As young men, exiled from England, the brothers had tried and failed in a pathetic attempt to claim their right of succession after Cnut’s death. Captured, Alfred had been placed in Godwine’s care. It had not been good care, for the lad had fallen into the clutch of Cnut’s illegitimate son, Harold Harefoot. Imprisoned and cruelly blinded, Alfred had not survived the torture. Ever since, Godwine had carried the blame for that wicked death. But such was the fate of young men who tried to take by force a crown from the one who was already, rightly or wrongly, wearing it.

Disdainfully, Emma snorted. “A pious weakling with neither brain nor balls.”

“Give him time, my lady. He has been almost thirty years in exile. He was but eight when forced to flee to your birthplace in Normandy.”

Aye, it must have been hard for the lad and his brother when they left London, muffled by the concealing darkness of night, bundled into a boat and taken, alone and frightened, across the sea to live among those of a foreign tongue and way of life. Never knowing when they would return to their mother, and England. Knowing, later, that when she agreed marriage with their father’s usurper, Cnut, that the when would not come until the Danish conqueror met with death. And even then, only if their place had not been superseded by other sons. 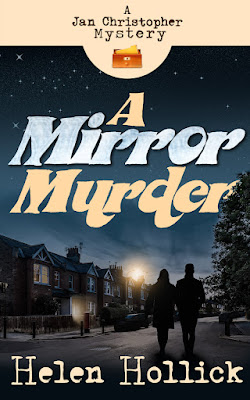 Murder, when I was a naïve sixteen-year-old, was very firmly in my uncle and guardian, DCI Toby Christopher’s domain, not mine. But two years after leaving school, in the summer of 1971, a brutal murder was to change my life. For a second time.

It is not the amount of blood pooling over the black and white linoleum, nor its copper-tang smell that clings, these many years later, to my mind or occasionally haunts a restless dream. The other smells are also there – but I’ll not dwell on those for the sake of the victim’s dignity. It is the hollow emptiness of the house that I remember. That stilled quietness, as if the place was suspended on pause, holding its breath – waiting. Waiting for the lonely coldness of death to be discovered, for the stunned silence to be disturbed by those who, by necessity, must intrude...

As a shy schoolgirl, I knew little of the world, my priority being to not make a fool of myself. Insecurities matter when you are an awkward teenager about to be let loose from the sanctimonious boredom of a girls’ school into the unknown of the grown-up world. My careers talk, in that final term of 1969, did little to boost my fragile confidence:

“What do you want to do when you leave school, January?”

I had sat, staring blankly at the two prim schoolmistresses. No one except those in ‘authority’, or girls who didn’t like me (the feeling was mutual), called me ‘January’. To my family and friends I was Jan. Jan Christopher. I frequently cursed the day I was born because that was why I had been lumbered with such a stupid Christian name. My identical twin and I came several weeks too early, on the last day of January 1953, so we were named for the months we were conceived and born. I got January because I arrived first, my twin got June. I guess it could have been worse: hard to shorten February into a respectable-sounding nickname.

June died when we were three years old. My memories of her are few and fuzzy. One was a Christmas morning, waking up with her next to me and feeling the weight of two present-packed stockings near our feet. I’ve no idea why we were sharing a bed. Perhaps we had been bundled in together because we’d had relatives staying for the festivities? But for most of those early childhood years I can only remember hearing incessant crying in a darkened room. She – we – had been ill. I don’t know what with, we never talked about it. Scarlet fever? Whooping Cough? Influenza? I survived. She didn’t.

So, there I was, a gawky lass who hid behind her curtain of long, non-descript brown hair, trying my best not to be noticed by the girls who had confidence (the bullies), being asked by two teachers what I wanted to do with my life after I finally escaped the long, tortuous, horrid, lonely, hell years at school. (I’m paraphrasing.) I had no idea. My only ambition was to write. I was always writing; fantasy and science fiction stories about space knights dashing from galaxy to galaxy at twice the speed of light. Real authors, I thought, were clever, intellectual people who went to university and got degrees and things. I had three minor exam credits: English Language, English Literature and Religious Knowledge. Even obtaining those had been a miracle, especially the last one, as after I’d finished the questions in the first half-hour of a two-hour exam. I had spent the rest of the time writing a story about an alien who flew through space doing Robin Hood-type deeds. It was a good story. I got a poor C for the exam. 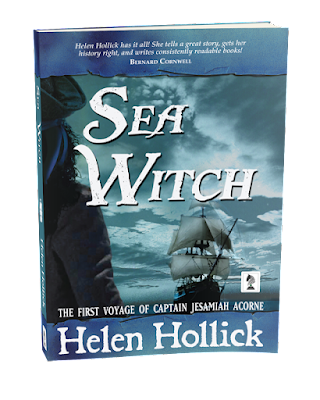 Shipwrecked on the Florida coast, Jesamiah Acorne spent a disturbed night, then heard some interesting news: