The Pirate Republic: Africa Gambit
A swashbuckling board-game adventure produced by
Greenfeet Games
for 1–5 people eager for pirates, pillage, & plunder
on the high seas of the Spanish Main & Africa 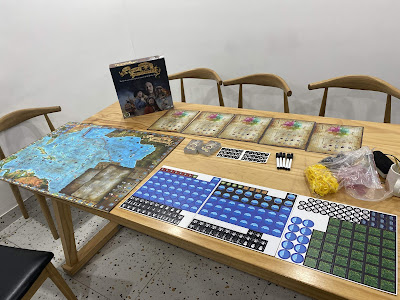 January 2022
Green Feet Gamers,
The Pirate Republic, Africa Gambit, will soon be in the hands of playtesters for the next 2 months.  You can see a prototype version above.  Isn't it a beauty?  We think so and are excited to take her out to sea!
The Kickstarter campaign will launch soon thereafter.
Please sign up HERE at your earliest convenience to keep updated with news:
https://www.kickstarter.com/projects/piraterepublic1/the-pirate-republic-west-africa-gambit
2021
Greetings Gamers
The Pirate Republic, Africa Gambit is coming to Kickstarter!
Please sign up HERE at your earliest convenience to keep updated with news:
https://www.kickstarter.com/projects/piraterepublic1/the-pirate-republic-west-africa-gambit
This is a second edition to the original The Pirate Republic. It's a 4x, campaign-based game that also adds West Africa riches, new Pirates, and the Portuguese into the mix. It is a game of exploration and adventure, with deck building and a revised combat system. Set in the early 18th-century, each player is an infamous pirate captain weaving their own tale by performing daring feats and plundering on the high seas.
You start with a deck of 12 cards, 2 of which are unique to your Pirate while 10 are shared. As you acquire cards and build your deck, your decisions will shape your Pirates’ personality. Your actions determine if you are a cooperative member of the Flying Gang, or a solo Pirate gone rogue, seeking fame and fortune on your own.
Using your cards you will sail across the map, strike fear on enemies, recruit crew, attack, defend, form a pirate haven, sack forts, complete global missions, or build infamy (which lets you gain even stronger cards). Each turn you will draw a hand of cards and take actions with them. Once you are out of cards, play goes to the next Pirate, and this continues until everyone has exhausted their decks.
Individually you are amassing Swagger as quickly as you can while collectively completing the global missions. The game ends when three of four global missions (chosen by the players before the game begins) are completed. If the Flying Gang completes the majority of these missions, they win! Otherwise, whichever Rogue completed the most missions wins. Alternatively, whoever reaches 100 Swagger first is the winner.
Pirates have left a mark on cultures around the world. Depicted as either brave, heroic, freedom-loving swashbucklers or as bloodthirsty criminals; we certainly remain infatuated with their exploits!
They’ve  been the subject of stories for centuries. From pirate books like Helen's awesome Sea Witch Voyages series to  TV shows like Black Sails to board games, like the Pirate Republic. 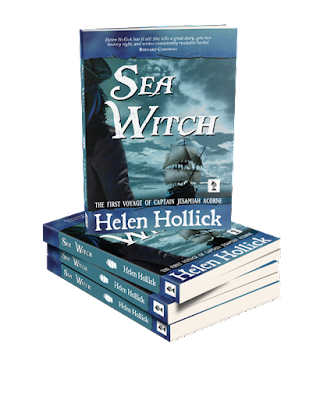 Helen has teamed up with Green Feet Games and game designers, Dr Sam Hillier and Tom Butler who are revising and expanding their Pirate Republic board game to encompass the West African coast and further piratical missions - which will include an adventure with the young Jesamiah Acorne and the crew of Mermaid (from the book When The Mermaid Sings) 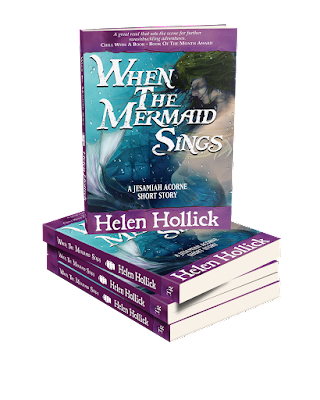 What better way to keep the spirit of the 'Golden Age' alive, through taking on and playing one of the historical pirates of legend - or even Helen’s character, Jesamiah Acorne?
Podcast interview with Tom Butler:
https://www.dicetower.com/game-podcast/board-game-design-lab/designing-historical-games-tom-butler
Talking About Games: Narrative & Exposition
There's a very good article about board games here:
https://spacebiff.com/2021/06/24/talking-about-games-15/
Email ThisBlogThis!Share to TwitterShare to FacebookShare to Pinterest