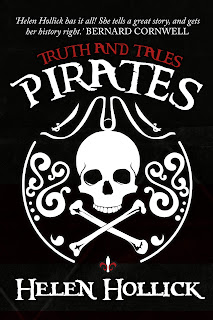 ENGLISH NOVELIST Helen Hollick has sailed the literary seas since 2011, when she launched Sea Witch, the first offering in her Sea Witch Voyages, featuring Captain Jesamiah Acorne, pirate, scoundrel and charming rogue. The series now stands at five swashbuckling volumes, with Acorne and his wife, the white witch Tiola, escaping scrapes with cutthroats
from the waters off Africa to England’s North Devon coast.

In Pirates – Truth and Tale, Hollick turns to nonfiction to present and engaging history of
the freebooters who were the scourge of the high seas from the sixteenth to the early eighteenth century.
Hollick acknowledges the lure presented by characters like Long John Silver in Robert Louis
Stevenson’s Treasure Island, or the legends of real-life sea robbers like Blackbeard and Captain Kidd. However, reality is often anything but romantic.

Piracy, she opines, was often an escape from poverty, a “cruel, callous captain,” or a threat from those already in the trade to “join us or die.” Whatever the excuse for sailing under the black flag, these were evil-minded men and, yes, women.

Hollick chronicles a well-informed history of piracy imagined in fiction and real life in fresh, breezy prose. Over nearly two centuries, buccaneers portrayed in novels and movies have shaped a fanciful concept of the brigands roaming the seven seas during the Golden Age of piracy. Hollick portrays these spurious characters as a counterpoint to the real-life figures of the time, among whom were: Captain Henry Morgan, Captain Samuel Bellamy, “Calico Jack” Rackham, Edward Teach (aka Blackbeard), Anne Bonny, Mary Read, and Edward Lowe. Authentic pirates were in general nasty free spirits – terrors of the sea. Their lives were often short, ending with the hangman, a cutlass or a lead ball.

Helen Hollick knows her pirates and the untamed society in which they lived.
Arrrgh!

*
Jaffa Reads Too....
There's a little bit of book love going on as the cat crept in and curled at my side, read with me, read with me, softly he sighed ....
http://jaffareadstoo.blogspot.co.uk/2017/02/review-pirates-truth-and-tales-by-helen.html

What's it all about..

It was a harsh life for those who went ‘on the account’, constantly overshadowed by the threat of death – through violence, illness, shipwreck, or the hangman’s noose. The lure of gold, the excitement of the chase and the freedom that life aboard a pirate ship offered were judged by some to be worth the risk.

Helen Hollick explores both the fiction and fact of the Golden Age of piracy, and there are some surprises in store for those who think they know their Barbary Corsair from their boucanier. Everyone has heard of Captain Morgan, but who recognises the name of the aristocratic Frenchman Daniel Montbars? He killed so many Spaniards he was known as ‘The Exterminator’. The fictional world of pirates, represented in novels and movies, is different from reality. What draws readers and viewers to these notorious hyenas of the high seas? What are the facts behind the fantasy?

What did I think about it..

I must admit that when I think about pirates, what usually springs to mind is the classic, Robert Louis Stevenson's Treasure Island, a story I read as a child curled in a chair immersed in the excitement of buccaneers and pirates, of buried treasure and golden doubloons, of marauding seamen and dastardly sea captains. And then, of course, much later, came the rather delectable image of the dangerously addictive, Jack Sparrow, the swashbuckling hero of the Pirates of the Caribbean franchise. However, the reality of piracy is a whole world away from the glitz and glamour of the movie screen and even the adventures of young Jim Hawkins, aboard the Hispaniola, pales into insignificance alongside the reality of what the real life pirates got up to as they sailed the Seven Seas.

In this informative and comprehensive book, the author takes the idea of pirates and piracy, a subject close to her heart, and shows how the literary and movie images of pirates, often bears little, or no, resemblance to the actual physical reality of the real life sea terrorists of the 17th and 18th centuries. The 'golden age' of piracy whilst steeped in mystique and legend, was, all too often, a time of great danger and uncontrolled violence. Interspersed throughout the book is the author's impressive knowledge of historical detail and it is obvious that a great deal of research has gone into bringing this piratical guide to life. Skillfully blending historical facts with literary fiction, sometimes, the book reads as lightly as a novel, but then, at other times, we come sharply back to reality with daring tales of mischance and menace, of lives ruined by too much grog and too many loose women, and which ended, all too often, dangled at the end of a hangman's rope.

Throughout the book, the author's real life buccaneers nestle comfortably alongside their more colourful literary counterparts. I especially enjoyed seeing the author's own pirate creation, Jesemiah Acorne, from The Sea Witch Voyages, come to vibrant life in his own much deserved chapter. The book has a rich and lively vocabulary, with snippets of interesting facts about pirates and piracy that you never knew you needed to know, but which are all recounted with the authors sparkling wit and fine attention to detail. For the songsters among you there are words to popular sea shanties, some familiar like, Spanish Ladies and What Shall We Do With A Drunken Sailor and others such as, The Top Man and the Afterguard, which are rather more obscure but no less fascinating to read of their origin and usage.

However you like your pirates, be they real or imaginary, there is no doubt that Pirates:Truth and Tales, is a great dip in and out of kind of book and whichever page the book falls open at, you are guaranteed to find a fascinating snippet into the life and times of these colourful, and it must be said, decidedly, dangerous characters.

Pirates Truth and Tales is a highly entertaining mine of fascinating information about all things piratical in (principally, but not exclusively) the so-called Golden Age of piracy, which spanned the late 17th to the early 18th centuries in the Caribbean and along the eastern seaboard of what was to become the USA.

Among many other things, the book gives biographies of the well-known (and less well-known) pirates and privateers of the era, and shows what a colourful but generally deeply unpleasant lot they were. Some were downright psychopaths.Others, like William Dampier, the rescuer of Alexander Selkirk (the inspiration for Robinson Crusoe) and the first Englishman to explore part of Australia, were men of extraordinary ability.

You can read it from cover to cover, or dip into it for nuggets of information about all sorts of pirate related subjects, such as: the constant labour required to keep a wooden sailing ship seaworthy, the different flags that various pirates flew (not all skull and crossbones), medicines of the age (horrible and useless), seamen's superstitions, sea shanties of the period (some rather rude), the history of rum and methods of production, and the fledgling tobacco industry (a cargo worth stealing, if there were no Spanish galleons to be had). And lots, lots more.

*
AMAZON UK 5.0 out of 5 stars
Thoroughly entertaining and yet highly informative - a real gem of a history
By littleangelicrose on 16 Feb. 2017

This volume is Helen Hollick's first foray into the world of non-fiction, proving, if proof were needed, that authors of fiction know as much about their subject as any academic. But they can write about it in a style that makes history not just interesting, but exciting.

This book explores everything there is to know about pirates, real ones, fake ones and fictional ones. She even delves into the culture of the day, such as examining how Daniel Defoe found his material and who else was influential in the world of pirates but who were not actually pirates. And there is even a bit of geology in there alongside reproductions of the sea shanties of the day and explorations of the towns and islands these scallywags called home.

There are other books about pirates out there, if you care to look, great tomes dedicated to Captain Morgan and his ilk, but this volume by Ms Hollick is the most approachable by far and in reading it you learn by accident, because although its approach is as rigorous as you would expect in a non-fiction, it is one of the most entertaining histories that you will read.