The Civil War - that's the ENGLISH Civil War (I do wish that writers would remember this when talking about their books on social media 'The Civil War' could be the English or the American one... very frustrating when looking for fiction to read! Oh and the English Civil War wasn't one war it was a series of wars, although all in the same time-frame and fought for the same reasons by the same people. Or at least, that's what my history teacher told us when I was at school.)

M.J. Logue writes about the Events of the 1600s when Parliament went against the Crown... and I must say she writes about it very convincingly and via highly enjoyable novels. I particularly like her stories because they are from the view-point of the soldiers of Parliament, whereas most novels take the King's side, and for me what is most interesting - by reading the adventures of Captain Hollie Babbit, Thankful Russell & co I am learning a lot that I didn't realise I didn't know!

Ms Logue told me (when I asked):

"Old Noll’s (Cromwell) significance is (IMO) massively overrated. He was a fairly nondescript, average, shouty bloke with average people skills and overstated military capacity, who surrounded himself with competent officers. Winds me up rotten when people nowadays have him marked down as “Big Boss of the Army” (he wasn’t) or “he banned Christmas” (he didn’t).
Yes, these things happened on his watch, but not because he was in charge.
Sometimes, the guys in the black hats aren’t the bad guys… 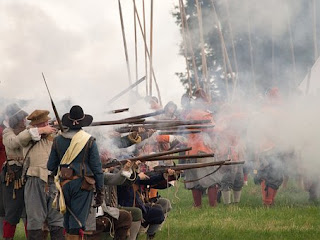 So... over to Ms Logue to hear about her Black Hat Guys...

I’ve always been fascinated by the seventeenth century, although I’m not sure whether the re-enactment or the writing came first.

Normally, when you think of the Restoration period, you think of elegant gentlemen in preposterous wigs and silks – with, or without, spaniels – striding manfully around the cobbled streets of London ogling orange-girls and duelling. (Cavaliers, she says sniffily, mentally channelling one Thankful For His Deliverance Russell.) The bad guys are usually the old-school black-clad Puritan types, cancelling Christmas and taking the moral high ground all over the place…. right?


When I first started writing about the boy Russell – and he was a boy, in his first appearance in the Uncivil Wars books: he was seventeen – what fascinated me about the period was ordinary life. The me and you of the 1640s, people who went to work and paid the bills and worried about their kids and met boys (and girls), were starting to talk around the idea that the poorest he that is in England hath a life to live, as the greatest he. That worship and religion could be things of independent free thought and personal conscience, rather than state diktats. And what I found so fascinating about Thankful Russell was that at seventeen he was unbearable. Brought up strict and zealous and judgmental – and then you take this beautiful, fierce, intelligent boy and you introduce him to the sort of world where everything he’s been conditioned to take for granted is up for question. And, you know, being the boy that he is, he takes to it like a duck to water, because so far as I can tell, the early Puritans were like that: give them a secular authority to recognise and chances are they’d say why? And says who? And what’ll happen if?

It could have ended there, of course. It could have stopped with the idea of the arrogant young zealot who has his horizons rather abruptly expanded by experience – lots of stories do.

But the thing that continued to intrigue, as Russell developed through the 1640s books, was that unbreakable streak of crusading idealism. And at the end of that series, he was tipping thirty and disillusioned, without a cause to fight for. And I couldn’t leave him like that, I simply could not leave a character with all that passion and ferocity and bravery just – lost, He deserved better. It was only, if you like, half a story.

It’s something you see echoed in the real historical figures of the time: John Lilburne, in and out of the Fleet jail for a very persistent habit of speaking his mind. Colonel Thomas Rainsborough, murdered under mysterious circumstances after speaking up about universal suffrage: he famously said:  "I think that the poorest he that is in England hath a life to live, as the greatest he; and therefore truly, Sir, I think it's clear, that every man that is to live under a government ought first by his own consent to put himself under that government; and I do think that the poorest man in England is not bound in a strict sense to that government that he hath not had a voice to put himself under."
Then there is John Lambert, rebelling again and again with increasing futility because his conscience would not let him do else.

It doesn’t seem to end well for any of them, for the most part, and that was what I wanted to write. What did happen to all the old firebrands and rebels, after the King’s Restoration? Because for some of them the matter of civil unrest had gone beyond King vs Parliament, and become a sort of moral maze of universal suffrage and human rights and democracy. Once you’ve started to unpick those ideas, you can’t put them back. Once the divers well-affected Leveller women have marched on Parliament bearing a petition to have their grievances heard – “an equal interest with the men of this nation in these liberties and securities contained in the Petition of Right” – where did they go?

And yet, those few – those very few – books to portray the fire and the passion and the idealism of Parliamentarian politics in the seventeenth century, have got a habit of making their heroes tub-thumping worthies. Somewhat dour, somewhat single-minded, somewhat…puritanical. Not human, not the sort of men who ever had a love-life, or a favourite supper, or sore feet. That’s where he started, my boy: a middle-aged, unremarkable, slightly bemused idealist, finding his feet again as the dust settled around him. I wanted him to be Cromwell’s plain, russet-coated Captain, who knows what he fights for, and loves what he knows; someone who was personally rather conventional, but who had once been caught up in remarkable things. And most importantly for me, that he wasn’t a dashing Cavalier, because I was very thoroughly bored with reading about those poor tragic Cavaliers. Big floppy hat and lovelocks had become a sort of sloppy shorthand for tragic romantic hero, and the world of fiction has a perfect sufficiency of soulful doomed poets. The world of fiction needs more ordinary romantics doing extraordinary things.

MJ Logue (as in cataLOGUE and epiLOGUE and not, ever, loge, which is apparently a kind of private box in a theatre) wrote her first short novel on a manual typewriter aged seven. It wasn’t very good, being about talking horses, but she made her parents sit through endless readings of it anyway.

Thirty-something years later she is still writing, although horses only come into it occasionally these days. Born and brought up in Lancashire, she moved to Cornwall at the turn of the century (and has always wanted to write that) and now lives in a granite cottage with her husband, and son, five cats, and various itinerant wildlife.

After periods of employment as a tarot reader, complaints call handler, executive PA, copywriter and civil servant, she decided to start writing historical fiction about the period of British history that fascinates her – the 17th century.

Her first series, covering the less than stellar career of a disreputable troop of Parliamentarian cavalry during the civil wars, was acclaimed by reviewers as “historical fiction written with elegance, wit and black humour” – but so many readers wanted to know whether fierce young lieutenant Thankful Russell ever did get his Happy Ever After, that the upcoming series of romantic thrillers for Sapere Books began.


I'll be taking a break here on 'Let Us Talk...' until 1st January, but meanwhile have you enjoyed the series of stories inspired by a song over on Discovering Diamonds?

M J Logue has contributed a lovely one about Thankful Russell and Thomazine, the love of his life - due to be published on 20th December, but why not start at the beginning with our first story? 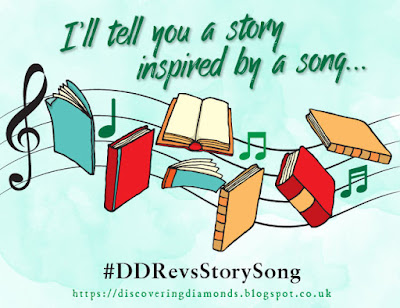