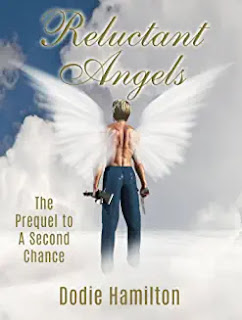 The Gabriel Quartet by Dodie Hamilton 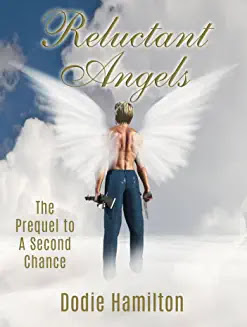 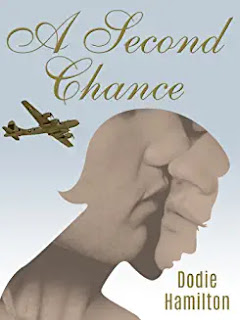 A SECOND CHANCE
AMAZON UK
AMAZON US
AMAZON CA
AMAZON AU
Family drama / mystery    WWII   US
'When Adelia, beautiful GI Bride, crosses an Ocean to be with a USAF pilot she takes with her a dark secret. Locked in her head is the identity of the father of her daughter, a US Major. When she reaches America, her fiancé, Bobby, isn’t there to meet her. He sent another man, the local undertaker, Gabriel Templar, in his place. Home in Virginia is not as promised. It’s a dirty place. It has a gated tower where a man hides from the light. It is crammed with secrets of its own. Adelia cannot remember her first love. Like the man in the tower, the memory of his face, how he used to look, is locked away. Amnesia holds the key to many doors. Adelia and her little daughter, Sophie, live in constant danger. Until one door is unlocked, and Lazarus returns from the dead, a lonely man with the name of an Archangel is all that stands between Adelia and fear.'
A Second Chance is a good story: A British war bride coming to live with an American soldier in 1942, despite hardly knowing him. She has her own secrets, an illegitimate child and on her arrival she finds a few surprises and mysteries, an absent husband and a hostile mother-in-law. The plot and the intrigue around the mystery kept me going throughout.
I felt that the overall presentation of the era and the characters was authentic and gives a great impression of war-time Virginia.
This is an enjoyable and compelling read that got me invested in the characters and, although being only one isolated such story, it gave me some fascinating insights into the psychology and reality of war brides. 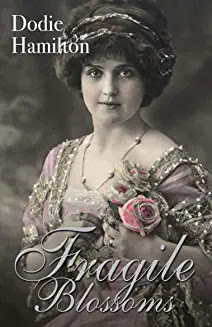 FRAGILE BLOSSOM
Amazon UK
Amazon US
Amazon CA
Amazon AU
Romance Edwardian England
Fragile Blossoms by Dodie Hamilton  is a romantic historical fiction novel set in the Edwardian period. This book is a delight to read - I can honestly say after years of reviews that seldom do you come across a writer with such a voice and such a heroine who can lift you up and put you into another world so deftly. Beautifully written...
Julianna Dryden is a celebrated beauty and muse for the great and the good - and is the protégée of the dubious wealthy Lady Evelyn who has a disreputable brother - oh yes, it is Georgette Heyer all the way but with such a modern twist - until she inherits a house. But a little house with such a legend - once a teashop to two mysterious and difficult sisters. Julianna and her little son Matty seek an escape and here it is. Our heroine is a widow and so must rely on her patroness which is increasingly a burden due to her attentions.... So off to Norfolk and Sandringham (and yes, the king makes an appearance) where Julianna befriends the publican and a dark, handsome builder who helps with the teashop unwillingly.
Julianna wants the shop to be a success; and so it looks until scandal looms through no fault of her own - and then Julianna finds friends fall away and her son in danger.
This is the sort of book that cheers you. Our heroine is so engaging but not a pushover and you root for her all the way as the scattering of great names test her. Yes, some of the plot is implausible, some of it over romantic, but that does not detract from writing that lifts you up.
Why the author hasn't found a publisher I don't know - except that this novel could be edited by a good quarter and in the middle it did weigh as I turned pages to get on and needed to pick up - and way, way too many points of view dropped in - with a better editor this would be such a good book. So give it a go.

About the author
Dodie Hamilton, or the Spiritual Midwife as she is known, is recognized throughout the world for her work in psychic counselling: her particular interest being the Near Death and Out-of-Body experience.
Over fifty years she has given countless private consultations and appeared at many of the Mind, Body & Spirit Festivals. All of her books and writings - no matter how real, and how flesh and blood, as in say, A Second Chance, the first in the Gabriel Books - are borne of years of personal exploration of the Spirit Realms, her mentor in this work being the late Robert A Monroe, of the Monroe Institute, Virginia, author of Journeys Out of Body, Far Journeys, and The Ultimate Journey, and to whom she is ever grateful.
Three of her novels have won Reader's Awards:
A Second Chance and Fragile Blossoms won The Chill Reader's Award
Perfidia, the sequel to A Second Chance won a Chill Award and A Diamond Award. Reluctant Angels, the prequel to A Second Chance, received The Readers Chill Award.
Air and Angels is Dodie's latest novel
TWITTER @dodie_hamilton  https://twitter.com/dodie_hamilton
FACEBOOK https://www.facebook.com/dodie.hamilton.7 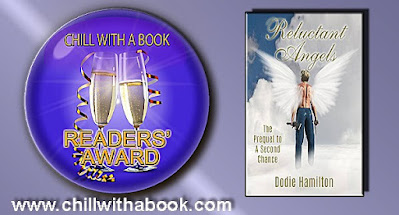 The Jan Christopher Cosy Mysteries
set in the 1970s
http://mybook.to/AMysteryOfMurder
~~ ~ ~ ~
The SEA WITCH VOYAGES
nautical adventures set during the Golden Age of Piracy
* * *
Plus many more...
fiction, non-fiction
www.helenhollick.net
Email ThisBlogThis!Share to TwitterShare to FacebookShare to Pinterest