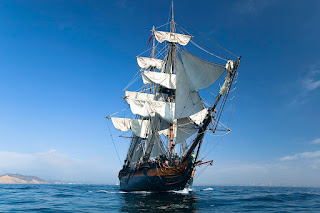 The agent sat thoughtfully in her office chair puffing at her cigarette.
"What you need to do, darling, is write a fantasy novel.”
"But I don't really do fantasy, do I? I spent ten years writing my Arthurian trilogy without any fantasy whatsoever because I wanted to remove Arthur from the myth and magic."
"Yes but Harry Potter is all the rage. Why not write something for teenagers?"
The author trudged down the four flights of stairs and out into the London rain. She crossed the road opposite the Ritz, wondering if she could afford tea there. Checking her purse, she toddled into Joe's cafe instead.
She really didn't want to write fantasy. Nor for teenagers. She liked writing historical fiction, she liked character interaction, the what motivates people, the invention of characters and what makes them tick. She liked writing about rugged heroes that were the sort of men you wouldn't want to get into a drinking contest with, but who would, all the same, be there to fix the fuse... and know where the torch was!
Some months later


When I got home I started writing what was to be the first Voyage - Sea Witch. The story wrote itself, the words pouring from me. I could not stop writing. Jesamiah's adventures consumed me. I had so fallen in love with that pirate!
I couldn't even stop writing over Christmas, though I did stay away from the PC on Christmas day itself. Christmas Eve, Boxing Day - from dawn to dusk, I wrote.
When I finished, quivering with excitement because I knew I had written something special, I sent the finished manuscript off to my agent.
I didn't hear anything for six weeks. When I finally plucked up courage to telephone her I was devastated to hear that she didn't like it. Disappointed, but determined, I re-wrote the opening (ditching almost fifty pages) and re-submitted.
Again she disliked it.
I asked why.
Because it was not suitable for teenage boys came the answer.
I was dumb-struck. I hadn't written it for teenage boys - I had no intention of writing it for teenage boys - this was an adventure romp for those of us adults who like adventure romps. It's about a rogue of a character, a charmer. A pirate. It was a blend of Hornblower, Sharpe, Indiana Jones, James Bond and Jack Sparrow. It was deliberately intended to have a few 'adult' scenes with 'adult' language and adult 'relationships'. It was for adults for goodness sake!
She also hated the name Jesamiah Acorne. She said it was silly.
Well, too bad that is his name. I didn't make it up, I was told it the day I met him on the beach.
I was offered an ultimatum. Either I change the name and write the story for boys, or find another agent.


I am the first to take advice from my editor where changes to grammar, spelling, the layout of the story etc are concerned. But completely change the story I adored to something I did not want to write?
No.
My ex agent and I parted company - and she informed me that my mainstream publisher was not going to re-print any more of my books. I was truly on my own.

That was back in 2006.
It has been hard promoting my books more or less on my own ever since. I've come close to despair on occasion - including when the small UK assisted company  I had moved to went broke. (Turned out the MD was a con man of the worst kind.) So I went to a better, reliable company. More recently the series has been picked up by a small independent US publisher, although I will be going totally D.I.Y. for future books.

I knew I had a winner on my hands.
It just might take me a long while and a lot more hard work to actually manage to sail past that illusive Best Seller winning post.... but Jesamiah and I will get there.
We will.

The SEA WITCH VOYAGES
nautical adventures set during the Golden Age of Piracy
NON-FICTION
~ ~  ~ ~ ~ ~ ~
Email ThisBlogThis!Share to TwitterShare to FacebookShare to Pinterest