I first encountered Rosemary Sutcliff at school when I was about 14.
Our English mistress, Mrs Llewellyn, was a real dragon. We were, on the whole, terrified of her. It must have been towards the end of term, I assume she had covered the Curriculum (such as it was back in 1966/7) for we trooped into class and she announced, “Settle down, I am going to read you a story for the next few lessons.” 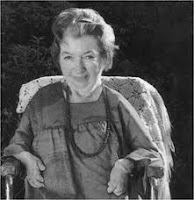 From that day my opinion of  ‘Lulu ‘ altered. She had already sparked my desire to write when I’d received back a homework assignment with the gut-wrenching words See Me After Class scrawled in red ink. I duly, timidly, approached her desk when the other girls had gone, assuming I was in for a roasting (although for the life of me I could not see what was so awful about my work.) “Now then Helen,” she said, “this is good, but it could be better.”
She then proceeded to show me how, by altering a sentence around, adding words, taking a few out, my story could be improved. She showed me how to write, she  must have seen some glimmer of early talent in me I suppose. I remain grateful to her to this day.
Sitting there, listening enraptured to that story (The Queen Elizabeth Story) my delight was complete. Until then I had basically only read pony stories (I so wanted a pony of my own) but Rosemary Sutcliff transported me into another world of the enchanted past. I had no idea a novel without a single equine in it could be so utterly engrossing.
I would like to say I was immediately hooked into reading nothing else, but exams and studying – and the usual distraction of a growing teenager got in the way, so it was a few years later that I re-discovered Rosemary’s books.
By then I was working as an assistant at the local library, having left school at 16. I was still writing, although I had moved on to science fiction and fantasy, for these were the days of Star Wars – first time around. I came across Mary Stewart’s Crystal Cave / Hollow Hills and realised from her author’s note that King Arthur properly belonged to the post-Roman period, not the later Medieval era of knights in armour, turreted castles, jousting and courtly love. I was so thrilled – I hated those traditional tales of Arthur, they never seemed real.  I became absorbed in reading all I could about Roman Britain and tracing Arthur to the years circa 420 – 520 A.D.
And then I found Eagle of the Ninth on the shelf. Instantly, I recalled the delight of those English lessons and grabbed it. I read it in a day, couldn’t put it down. Wanted more – Frontier Wolf, The Lantern Bearers, The Outcast, Sun Horse Moon Horse, Song for a Dark Queen – Mark of the Horse Lord – I still cry buckets at the end of that one.  Her characters were so alive, so real, so believable! Her words were so beautiful.
More than anything I wanted to write like she did.
And of course I had devoured Sword At Sunset, Rosemary Sutcliff’s own brilliant novel about Arthur, which, like my own Trilogy was set in the more accurate post-Roman world.
I began writing what turned out to be The Kingmaking in earnest in 1987, although I was not accepted for publication until 1993.
I eventually plucked up courage to write to Rosemary to tell her I was working on an Arthurian novel, how her writing had inspired me, and how the character of Arthur was almost possessing me at times.
To my delight I received a letter back, written in her own, somewhat unsteady handwriting – she did, after all have arthritic hands. This is part of what she wrote:
“I do hope all goes well with your King Arthur – I know just how you feel about him, he almost killed me when I was writing “Sword at Sunset”. His demands made me take work to bed with me, work till the small hours, and wake up at 6 am still thinking about him and planning the day’s work. And when the book was at last finished, having spent two years thinking and feeling as a man, and that particular man, it took me six weeks to get back inside my own skin again.
With all good wishes
Rosemary Sutcliff”
And she continued the last ‘f’ into a cartoon dolphin – the famous dolphin from the flawed signet ring. 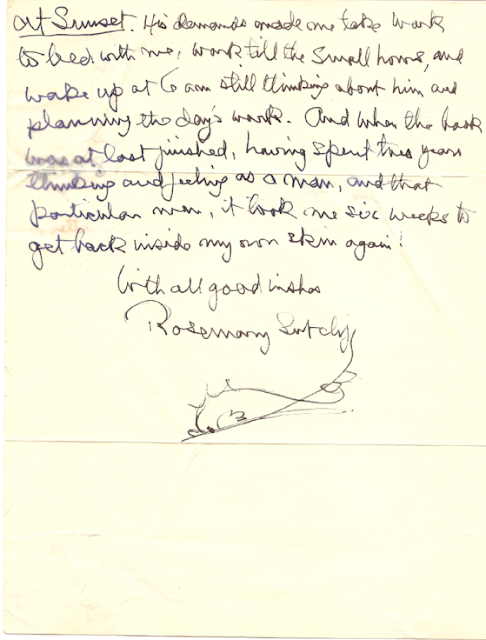 I treasure this letter. It lives inside my copy of Mark Of The Horse Lord, which is my favourite of all her stories.
I am now a published author in the UK and North America, but I still wish I could write even half as good as Rosemary.
In my novel Harold the King (titled I am the Chosen King in the US) one of the historical characters was Eadric, Captain of King Harold II’s fleet; he was one of the first men to be arrested and imprisoned by Duke William after the English defeat. In my acknowledgements I  have written:
‘The books by the late Rosemary Sutcliff, an historical fiction author sadly missed, have always been an inspiration to me. Her last novel brought the feel of the sea and those beautiful – but deadly – Viking longships to life. As a small personal tribute to her gift of storytelling, Eadric the Steersman’s ship, The Dolphin, is for her.’
A small, but heartfelt way of saying thank you to a fabulous writer.
Rosemary Sutcliff CBE (14 December 1920–23 July 1992) was a British novelist, and writer for children, best known as a writer of historical fiction and children's literature. Although she was primarily a children's author, the quality and depth of her writing also appeals to adults; Sutcliff herself once commented that she wrote "for children of all ages from eight to eighty-eight".
She contracted Still's Disease when she was very young, and used a wheelchair most of her life. Due to her chronic illness, Sutcliff spent most of her time with her mother—a tireless storyteller—from whom she learned many of the Celtic and Saxon legends that she would later expand into works of historical fiction. Sutcliff's early schooling was constantly interrupted by moving house and her disabling condition. She did not learn to read until she was nine years of age, and left school at fourteen to enter the Bideford Art School, which she attended for three years.
Sutcliff began her published writing career in 1950 with The Chronicles of Robin Hood. She wrote The Eagle of the Ninth in 1954 and won the Carnegie Medal in 1959 for The Lantern Bearers and was runner-up in 1972 with Tristan and Iseult. In 1974, she was highly commended for the Hans Christian Andersen Award. The Mark of the Horse Lord won the first Phoenix Award in 1985, and The Shining Company in 2010.
Sutcliff was appointed an Officer of the Order of the British Empire for services to Children's Literature, and was promoted to be a Commander of the Order of the British Empire in 1992. She wrote incessantly throughout her life, and was still writing on the morning of her death in 1992.

MY LATEST BOOKS - AVAILABLE ON AMAZON