my guest for Tuesday Talk...

Alison Morton as part of her Inceptio Blog Tour

Thank you very much for welcoming me to your Tuesday Talk, Helen.

My debut novel, INCEPTIO, was published in early March, the end of three years of slog – researching, writing, and polishing. It’s a thriller, so it’s doubly exciting. Now, I’d like to tell you about it! But too much telling’s frowned on by Those Who Know, so let me show you…

An eleven year old fascinated by the mosaics in Ampurias (huge Roman site in Spain), I asked my father, “What would it be like if Roman women were in charge, instead of the men?”

Maybe it was the fierce sun boiling my brain, maybe it was just a precocious kid asking a smartarse question. But clever man and senior ‘Roman nut’, my father replied, “What do you think it would be like?” Real life intervened (school, uni, career, military, marriage, motherhood, business ownership), but the idea bubbled away in my mind and INCEPTIO slowly took shape.

Of course, I made the classic mistake of submitting too soon, but had some encouraging replies. Several rewrites later and I’d made some full submissions, even to a US agent! I had replies like ‘If it was a straight thriller, I’d take it on’ and ‘Your writing is excellent, but it wouldn’t fit our list.’  I was (am!) passionate about my stories so I decided to self publish with bought-in publishing services provided by SilverWood Books. I found your advice about this particularly useful – thank you! Using high quality professional backing (editing, advice, registrations, typesetting, design, book jacket, proofing, etc.), I’ve found it a fantastic way for a new writer to enter the market. 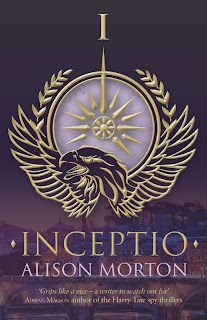 You describe your novel as an “alternate history thriller” – how is that different from a normal thriller?

Alternate history is based on the idea of “what if”? What if King Harold had won the Battle of Hastings in 1066? Or if Julius Caesar had taken notice of the warning that assassins wanted to murder him on the Ides of March? Sometimes, it could be little things such as in the film Sliding Doors, when the train door shuts and Gwyneth Paltrow’s character splits into two; one rides away on the train, the other is left standing on the platform.

The rest of the story or history of a country, from that point on develops differently from the one we know. In my book, Roma Nova battled its way from a small colony in the late fourth century somewhere north of Italy into a high tech, financial mini-state which kept and developed Roman Republican values, but with a twist. It’s really fun working this out! The thriller story then takes place against this background. The nearest comparison would be J D Robb’s Eve Dallas Death series.

Stories with Romans are usually about famous emperors, epic battles, depravity, intrigue, wicked empresses and a lot of sandals, tunics and swords. But imagine the Roman theme projected sixteen hundred years further forward into the 21st century. How different would that world be?

So what’s INCEPTIO about?
New York – present day, alternate reality. Karen Brown, angry and frightened after surviving a kidnap attempt, has a harsh choice – being eliminated by government enforcer Jeffery Renschman or fleeing to the mysterious Roma Nova, her dead mother’s homeland in Europe. Founded sixteen centuries ago by Roman exiles and ruled by women, Roma Nova gives Karen safety, a ready-made family and a new career. But a shocking discovery about her new lover, the fascinating but arrogant special forces officer Conrad Tellus who rescued her in America, isolates her.

Renschman reaches into her new home and nearly kills her. Recovering, she is desperate to find out why he is hunting her so viciously. Unable to rely on anybody else, she undergoes intensive training, develops fighting skills and becomes an undercover cop. But crazy with bitterness at his past failures, Renschman sets a trap for her, knowing she has no choice but to spring it...

And next? I’m working on PERFIDITAS, the second book in the Roma Nova series.

You can find INCEPTIO on
Amazon.co.uk
Amazon.com