Our Anniversary and the Highbullen Hotel...Tuesday Talk - early (written on Sunday)

Mind you it wasn’t exactly restful – and outside was thick snow. It was moving-in day and somehow our fantastic removal men from Pickfords got us in.

I had been up since 2.30 am looking out the window every fifteen minutes – at first to see if it was snowing, and then to see how much it was snowing.

We (my husband and I, and our elderly dog, Rum, (sadly no longer with us) had spent the night at the Highbullen Hotel which is just outside the Village boundary. It is a nice old hotel – friendly staff, comfortable beds etc. There are thirty-six rooms, some as annexe building but with eleven luxury rooms in The Manor House. There’s a croquet lawn and professional level eighteen-hole golf course. Gym, swimming pool, sauna… and wonderful views across the Mole Valley.

One big drawback. The village is on a high ridge, accessed via five very steep, very narrow, lanes, most of which have very few passing places – if you can’t reverse, or have a wide, posh car - don’t come to Chittlehamholt! The village is rural (less than ninety houses, most of which are or have been farms). No street lighting or bus service; no school – although there is a village hall and a community shop.

Because of the snow that January day, most of the hotel staff, including the restaurant chef, the majority of whom live a car journey away, couldn’t get to work.
Problem. Breakfast. 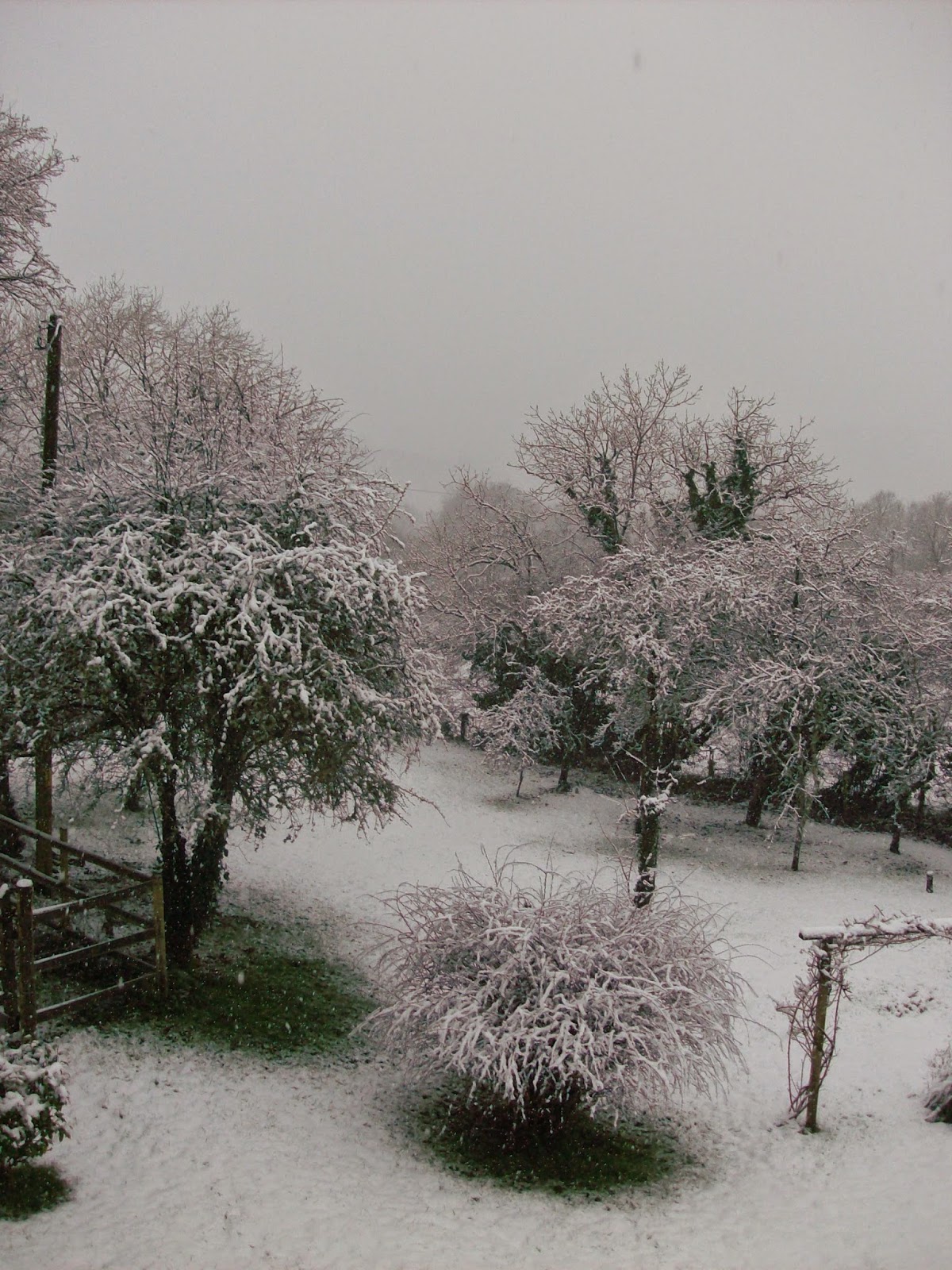 To the rescue came Martin and Jane, (former owners: Highbullen was sold in 2012 to businessman, Frank Chapman, the man who introduced the concept of timeshares to the UK.) They invited us into their private house at the edge of the Highbullen Estate for breakfast. And, since we had re-booked our room for that night (in case our furniture could not be moved in – I didn’t want to be stranded with no bed or food!) they made us promise to join them for dinner that night.

Fortunately most of the furniture was delivered but all I can remember of that busy and exciting day, was men carrying stuff walking in and out. No time to explore, or get to know our new house.

When the men left we had a chance to draw breath. My lovely, lovely house – all mine. What a difference from our previous ground-floor flat in the London suburb of Walthamstow.
Winning that six zeros Lottery prize has its compensations!

Getting dark, it was time to go. We had made the right decision to return to the hotel - the bed had arrived, but it had not been put together, and we only had tea, coffee and biscuits in the new larder. We locked up, stood outside our porch door – and it suddenly hit us that we were now living in the middle of the countryside not London. It was pitch black dark.
Gingerly, one foot in front of the other, we groped our way to the car.

Lesson One. Always know where a torch is! 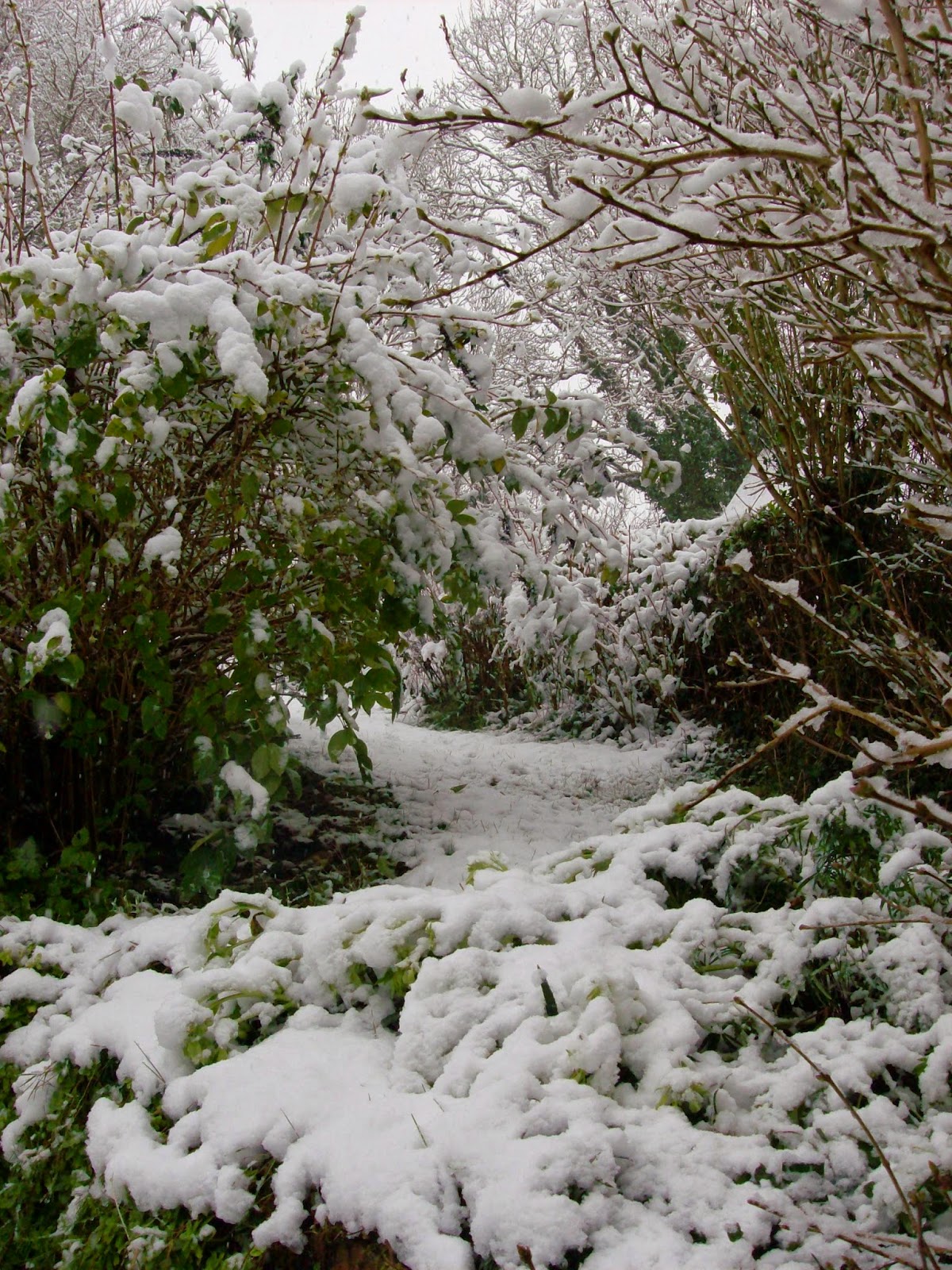 We were treated as most welcome guests by Martin and Jane (thank you both of you) a fabulous meal with our hosts and a small shooting party – despite our very scruffy appearance. Ron and I were dressed for moving house, not for a dinner party. Apart from nightclothes and a change of underwear we had nothing else to put on!

The removal men brought the last of our furniture on Saturday morning – bit of a panic when we realised the house was cold and the central heating was off. Soon sorted. When installing the fridge in the scullery I remembered turning off a socket (“Hmm, I wonder what this is for?”) Turns out it was the master switch for the Range’s boiler.

Kathy (my daughter) and the horses and cats were supposed to have come down on the Saturday, but I had phoned to say don’t come – the motorway would be treacherous, and they would never get the horsebox safely along the village roads, let alone down our narrow lane. So she booked into an hotel near the livery yard and stayed there a whole week with boyfriend (now husband) Adam looking after her. (Thanks Adam – I would have been so worried otherwise!)

I remember starting to make our house our home straight away. And for the first time in many years actually enjoyed the snow. Before, I had always worried about travelling to and from the stableyard to do the horses – when they eventually arrived they would only be at the other end of the garden. Ron went for a walk on the Wednesday – the lane was beautiful, the orchard – our very own orchard – enchanting. Old Rum enjoyed himself.

And when the snow melted? There were hundreds of snowdrops instead!
Paradise Found. 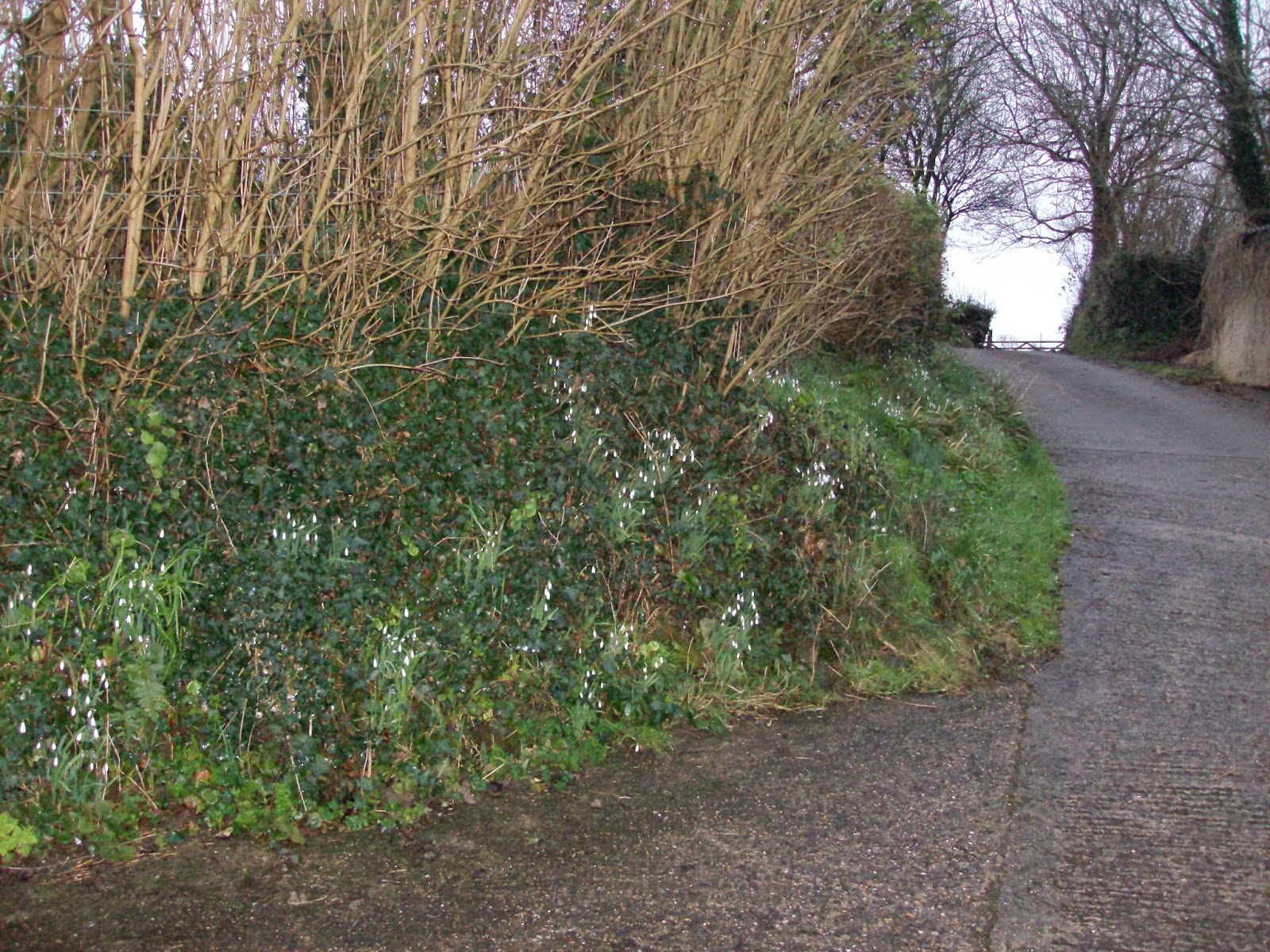 Two years on and I am as much in love with my gorgeous old house as ever. Kathy and Adam have their own part, a newly completed extension called Owl Lodge (yes we have several owls here). Baz is our dog now and the two cats have well and truly settled in. Lexie is the only original horse, we have some other new ones – including two Exmoor ponies – both born on Exmoor a few miles away. Plus eight chickens, five ducks and the Goose.

The only thread of disquiet is the hotel which made us so welcome. Highbullen is being re-developed. The luxury hotel is to remain – back in the 60’s it was a place where celebs came to relax in privacy and to play golf. Legend has it that Sir Laurence Olivier used to pretend to be a member of staff and serve drinks behind the bar. Now, time-share holiday lodges are to encroach on the grounds – trees will be thinned out, the golf course will be reduced to accommodate two-bedroom holiday apartments. Ninety-four timeshare lodges are to be installed.
That will be a larger complex than our little village.
The hotel's manager, according to a local newspaper, hopes that Highbullen will become ‘one of Devon's premier leisure destinations’. I hope not!
There is already a four-hundred seat conference / wedding venue centre added along with several restaurants, new tennis courts, and a refurbished gym. There will be a spa and more rooms added to the hotel itself.

Good luck to them for the old hotel – providing they remain in keeping with its old style charm and character – but ninety-four lodges? The overall guest accommodation capacity is set to increase by 700% !

Why do I care? The hotel is on the opposite side of the village to where we live. Our home is one mile down a very quiet and secluded lane… But, in the two years I’ve lived here I have come to love Chittlehamholt Village. I have made many new, very lovely friends. I have grown to appreciate the star-studded un-light-polluted night sky; the fresh, clean air – the slower pace of life and the peace and quiet. The only noise at night is the wind and the owls.

What sort of impact will this 700% accommodation increase have on the only, narrow, unlit, road which serves the village?

What sort of impact will hundreds of people coming to use this new enormous enterprise have on our tiny quiet rural village?

What will they do with themselves once they have tried the gym, played tennis, gone for a swim and dined in the restaurants? Play golf on the now not-so-good golf course? Will Highbullen become a Devon Centreparcs? Or will visitors drive out to the lovely beaches along the coast at Ilfracombe, Westward Ho! and Clovelly? Take their cars to explore Exmoor with its lonely splendour – the Doone Valley, Valley of the Rocks; Porlock, Lynton, Lynmouth…? Drive to the shops and old Pannier markets at Barnstaple and South Molton? Note drive. There is no public transport in our village. There is the infrequent Tarka Line train, but the nearest stations are a good couple of miles away. Not really within a comfortable walking distance (despite what Highbullen in their planning application say).

All this will mean a lot more daily traffic in our lanes. It is difficult enough using the lanes in and out of Chittlehamholt as it is – most trips you have to reverse many yards because of oncoming traffic… and that is meeting just the occasional solitary car. Increased traffic in narrow lanes? Not good..

I’m not against the hotel expanding. I would like to see it restored to its old former glory of a luxury, rural, hotel where local village people can have the opportunity to work if they wish. Gentle, in-keeping, tasteful expansion could be very good for the village. A subtle increased number of tourists - maybe a return of the celebs who crave tranquillity and escapism, and the peace of being left alone to enjoy it. Will anyone get this on a lodge-infested timeshare style holiday-park estate? 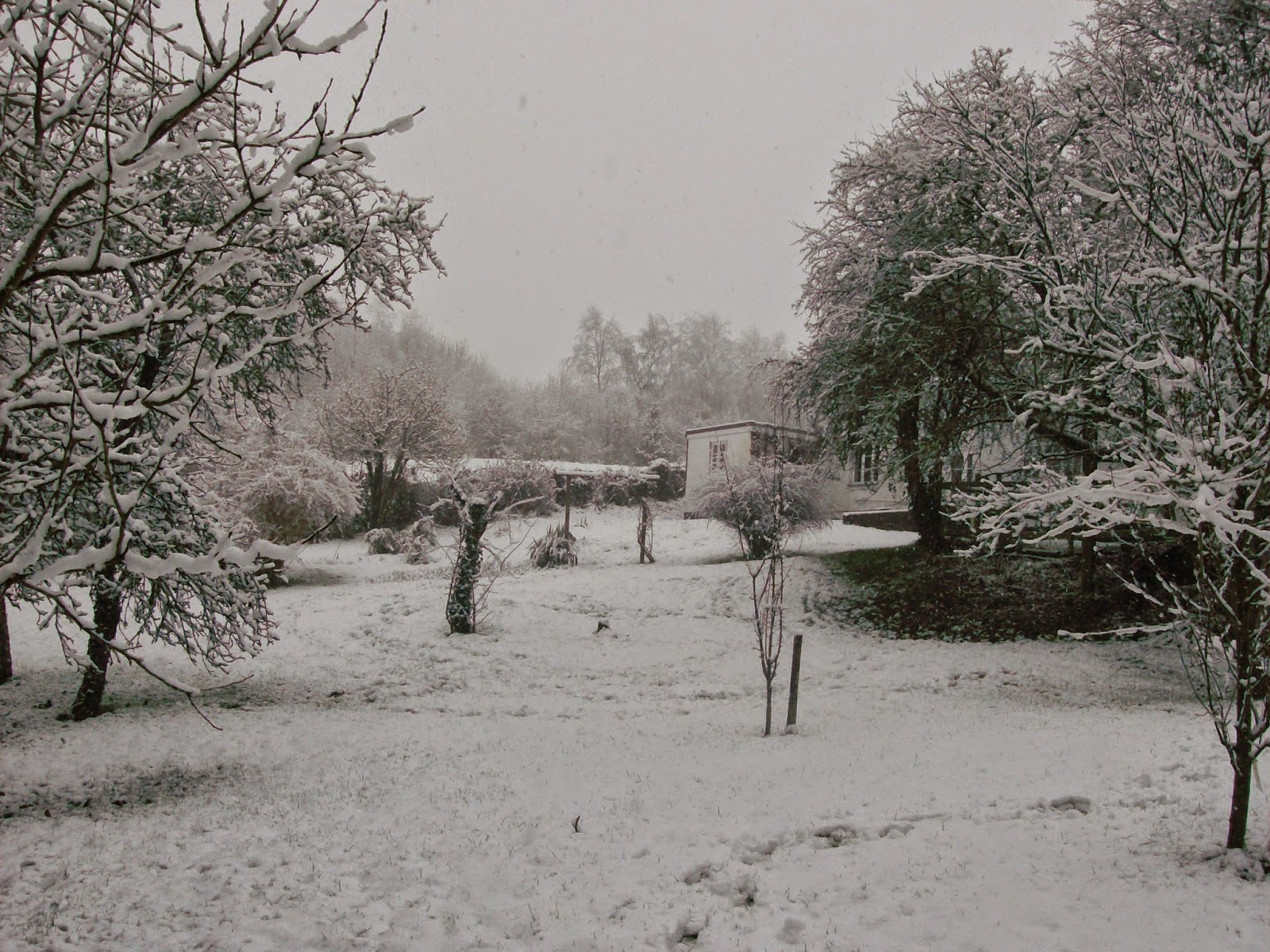 What I am passionately against is what Frank Chapmen has in mind. Dozens of tourists mooching about with nothing to do on a rainy day (and it rains a lot here in Devon). A stream of traffic in the lanes causing regular jams because there is nowhere to reverse into, although no one will be able to reverse anyway if two tractors and an oil-delivery lorry completely gum everything up.

That snowy day in January when we moved in…?
We came here because the village doesn’t have many people,  has minimal traffic, quiet and tranquillity.

Why do these rich millionaire businessmen, who have absolutely no care or concern for anything or anyone outside their own profit balance, have to trample all over the rest of us who DO care? 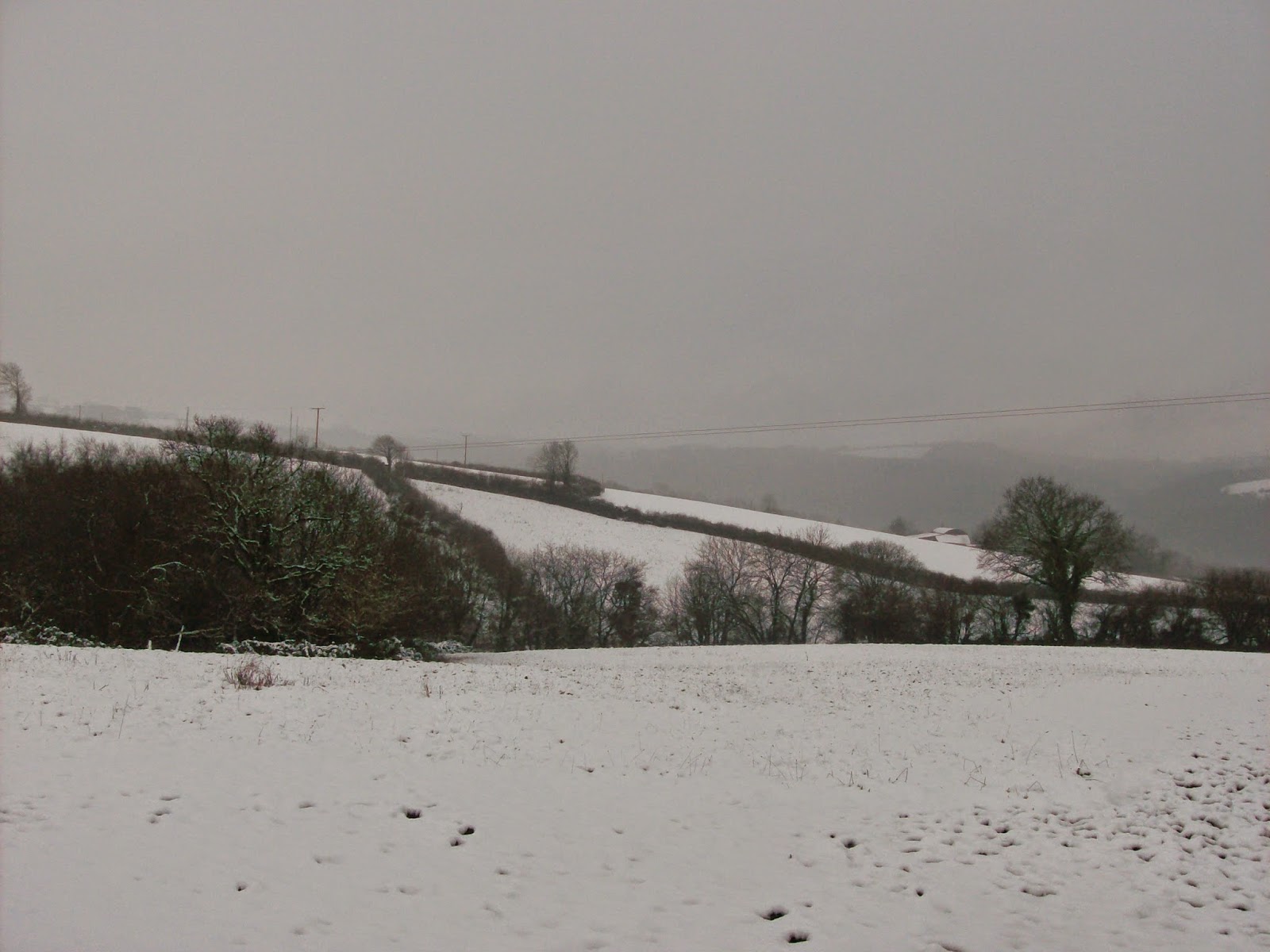 These plans for Highbullen are the wrong thing in the wrong place.