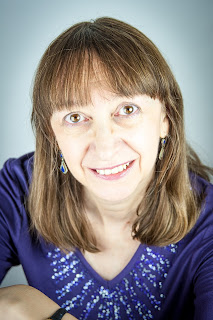 You turn up, breathless with excitement, assured the event has been well-advertised (yeah, never take that for granted. Do your own advertising - always!) to discover lots of chairs laid out, coffee ready - and nobody there. You sit, biting your nails, trying to look more confident than you feel, and eventually two or three people trail in, wander over to the section allotted to you and sit down.

Hallelujah! You haven't got to speak to an empty room. You watch the clock anxiously, and, at last, one more person ambles in. You catch the host's eye and telegraph silently, frantically, 'should I start now?' and you don't know whether you want to wait in case there are any latecomers or just get on with it.

Somewhat disappointed but relieved that at least a few have shown up, you manage to fill your hour with what you hope is sparkling entertainment. Two of the audience are even looking at you and smiling.

'Any questions?' you encourage.
Blank silence.

Um, what do you do now? You flounder for a few minutes and gasp with relief when the host thinks of something to ask. A little more talking and it's over. You don't let your smile falter when they leave. They pass your desk - but they don't buy anything. The two nice ladies who seemed to enjoy your talk have gone, and one of the gents heads towards you. You grab your pen ready to sign a book - and he whips out his own book and starts to tell you all about it. His - not yours! You grit your teeth and force a smile; you even answer him graciously as he chatters on. Then, the other gentleman catches your eye.

You manage to disengage with Mr. Own Book Promoter and slide over to your new audience. He's most interested in what you do. Can you tell him how to go about publishing, please? 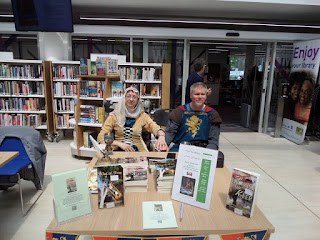 So, you're done. You think you did quite well, considering, but you've sold no books and no one took your business cards or flyers. And you didn't even cover the petrol money. To make matters worse, you were so optimistic, you bought thirty books especially for today. (That was always a big mistake for me.) You donate one to your host and take the other twenty-nine home. At least you won't have to buy any for your next ten or more events - if you even get any more.

The first one I ever did was in a restaurant and I was delighted to get the 'gig'. I'd prompted it with a poster on social media suggesting that having me might help boost business (rather cheeky considering no one had heard of me) and someone got in touch. I had envisioned a cosy little cafe where people would buy coffee and cakes, listen to me, and buy my books. The reality was somewhat different.

I had a table in the lounge part of the venue where mums stopped by for coffee after dropping off their kids, and other people sat hunched over laptops, oblivious to my babblings. Meanwhile, the hustle and bustle of diners in the back part of the busy restaurant competed against my unamplified voice.

No one had actually come to hear me apart from a few kind friends and neighbours - and I cannot tell you how much I appreciated their presence. To shout at people who were trying to chat over coffee was, to say the least, embarrassing.

However, my husband and I had a cunning plan. Iain has his own company. More importantly, at the time, it was situated nearby. And he had staff. Staff who were all too willing to down tools for an hour and be entertained. Yes, we had Rent-a-Crowd.

And so, for an hour, I hollered my work out to at least a small interested audience of friends and acquaintances, some of whom were kind enough to buy a book. Of course, being a newbie and an optimist, I had massively overestimated how many books I would need, and they still moulder in a drawer today since they are poetry and I now write fiction. 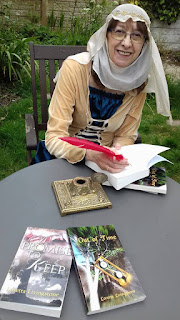 Most of us, if we're honest, have done more than one event like this. Even the good events often only move about four books and seldom break even.
Should we give up? Not on your life, and here's why.

Firstly, never despise small beginnings - you never know what they might lead to. That first part is actually from the Bible, and it's jolly good advice.

Every time you get asked to do an event, it's a compliment; it's also a chance to help get your name out there. Even if only three or four people turn up and don't buy a book, next time they hear your name, they'll know who you are. And if you publicise each event on social media, it can prompt another opportunity. People get to see that you are someone people want to listen to (you don't have to say how few turned up; put some spin on it). That makes them more likely to check out your books. And eventually, you might get offered a paying event. I've just done my first ever of those. I've been doing talks and signings since 2012 and often, but not always, selling a few books, but I've never broken even. This time, I came home with a profit.

If your event was at a library, people who previously thought maybe the reason you're an indie is because you aren't good enough for the traditional publishers will now start to realise the libraries think you are (trust me, libraries don't invite you if you don't meet reasonably high standards - they have their reputations to think of). So you are virtually accredited by a library signing.

And think about this - how many comedians and singers have you heard talk about their early appearances, the ones before their 'overnight success'? Mostly they consider it their apprenticeship - being heckled in dingy pubs and clubs with small, dirty (or no) dressing rooms, and only a few years back they'd have been smoky, too. How lucky are we? We get nice clean conditions (often in libraries, surrounded by books - lovely) talking to people who are (usually) polite enough to listen to us.

So, don't lose confidence; pluck up your courage, and get back out there. It will pay off if you give it time. But... don't take too many books....

Have you had a similar experience? Or how do you entice people to book signings - let's hear your thoughts! Leave a comment below.