Tuesday Talk: The excitement of that new book!

On holding your first published book
by Christine Hancock 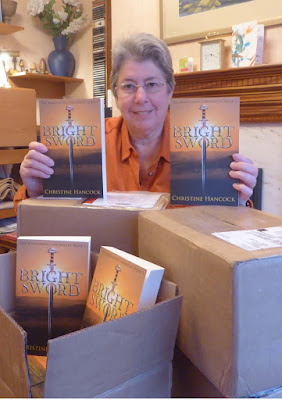 It has been delivered.
It was brought by a large van and arrived at my door in a cardboard box, five boxes, in fact. The copies of my debut novel; Bright Sword.

How do I feel?

It is like giving birth. I don't know whether to laugh or cry. I touch it carefully, stroke it's soft skin. I check it has the right number of pages and that everything is in the right place. How did I manage to produce this beautiful thing?

It all started a long time ago, five years almost to the day. On a cold day in January 2013, I joined a class at the local Adult Education Centre. I was a keen family historian with a flourishing blog. I wanted to write about the people I had discovered - non-fiction of course.
That Christmas I tried to write a short story about one of them, a pirate (doesn't everyone likes a pirate?) I found it difficult. I wondered why. I saw the class advertised: Writing Fiction. Why not give it a go? It would be a bit of fun. Little did I know it would change my life.

Each week we were set exercises, learning different aspects of writing, preferably  from our "Work in Progress". For several weeks I floundered. What was my WIP? I flirted with a Victorian painter, considered my pirate; did I know enough about ships? Then, gradually he revealed himself. Byrhtnoth, a tenth century Anglo-Saxon warrior, famous for a glorious death in battle. He was old, about my age, which nowadays is not old!

I wanted to find out more. What had turned him into this hero? I couldn't find much. He appears in history here and there. We know his father's name, but not his mother's. We know he married and her name. But where was a born and where did he live? Nothing. The perfect subject for a novel. Even the period was right - midway between King Alfred and 1066, no one else seemed to be writing about it. I had found my WIP.

Together we went back to the start. I mothered him when he was an orphaned child. I worried as he made friends, and enemies. We had our moments of crisis, when we nearly gave up. Now he is a man and I have fallen in love with him, and now our child has arrived, a publisher acting as midwife.

What will happen to our child? Will it be successful or will it fail, dying in poverty and disgrace?

I know it isn't perfect, all books have their faults, especially a first book. Everything is new. Are you doing things right or should you have tried something different?
I will try again. The next one will be better.

For the story hasn't ended. My hero thinks he has grown up, but he still has a long life before him. The book has become a series. I am writing book three and have plans for the fourth. After that, who knows?

But for now, I hold this, my first book. It is a wonderful feeling. Will I feel the same about the next? Perhaps not. For the first time is always special.

"England in the tenth century is close to peace, but the king is still in need of warriors. At the age of seven, his mother dead, Byrhtnoth is sent to train with other boys, but suffers as he has no father's name. He is shown a sword, his father's sword, and he is told that it will be his when he proves himself a man. When the girl he loves is captured by the Vikings he is sent to rescue her. A king tragically dies and Byrhtnoth blames himself. Can he overcome his fears and discover the truth about his father? Will he live long enough to become a man and claim the sword?"


Find out more about Christine