I was highly honoured to learn that a wonderful lady is writing her university thesis based around my Pendragon's Banner Trilogy. Honoured, flattered, and I must admit, awed - in my opinion, she has taken on a mammoth task. But she loves the books (again I am highly flattered) so is, I think, enjoying herself.

Several months ago I went up to London to meet her (over a wonderful lunch) and I don't think we stopped talking. My only problem was that as I wrote the trilogy over twenty-five years ago (I was accepted for publication by William Heinemann UK in April 1993 - a week after my 40th birthday,) so not having read it through for quite a few years, I could not remember all of it. I am tempted to read it again - but I know I'll then want to fiddle, and after all these years in print, fiddling is probably not a good idea.

However, I did tell my new friend all I could, and promised to answer, to the best of my ability, any further questions that cropped up. 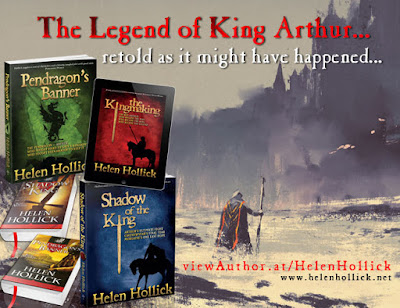 My Arthur is set firmly in the mid fifth century Post Roman era. The Legions have left and Britain is in chaos, a free-for-all. May the best, and strongest, survive.

My Gwenhwyfar (Guinevere) is a fiesty red-head Celtic born and bred. There is to be no 'love-triangle' for her. She admires Arthur, comes to love him (and has the occasional volatile fight with him!) but she is way too sensible to throw away her pride, her position, her status and everything in between on a Lancelot type character.

I must add here: I have no patience or liking for the later Medieval knights in armour / holy grail stories of Arthur. Can't stand them. Also, confession, Zimmer Bradley's novel annoyed me. Her Guinevere was so irritating. Many readers loved the book, although alas, the author has now also fallen from favour.  The one nod I will give to the book - it annoyed me so much it made me determined to write my own.

The early tales, though, of a war lord who has to fight to gain his kingdom, and queen, and fight even harder to keep them - ah that is a different matter entirely!

Much of my version is based on the research and ideas of Geoffrey Ashe, for no other reason than I liked his suggestions. (Let's face one fact here - Arthur is NOT FACT. There is absolutely no evidence whatsoever to prove that he did, actually, exist. Very probably he is a composite of several - even many - people). We are talking fiction here - and we all have our own ideas and beliefs and squabble like mad with anyone who dares disagree with us.

Anyway: my Arthur is flawed. He is a pagan, not the Christian 'good king' of latter tales (told I am certain to encourage men to go on Crusade). My Arthur has affairs, is not always kind,  is occasionally violent. He is a warlord - such men were not the goody-two-shoes type. Sorry to disappoint!) You will not find Lancelot, the Holy Grail, turreted castles, white Samite or ladies wielding dangerous swords in lakes, between the covers of my novels. Nor will you find Merlin. Again, so sorry to disappoint, but he didn't exist either.

However, there's plenty to make up for all these missing figures!

Morgause is the lover of Uthr, Arthur's father - and through jealousy, she loathes Arthur. Figures of 'fact' are included - King Vortigern, (although this may be a title - something like 'High King', not a personal name),  his son Vortimer, Ambrosious, Gildas, the first Gwynedd and North Welsh princes... as Geoffrey Ashe suggested, Arthur initially marries Vortigern's daughter Winifred by his Saxon wife, Rowena, daughter of Hengest. The marriage is a disaster. Their son is Cerdic... the founder of the West Saxon kingdom.

Winifred is a spiteful bitch (I thoroughly enjoyed writing her and Morgause - they are so deliciously horrible!)

You will also meet Cei and Bedwyr, and some more familiar - pre-Medieval tales names.

So, back to my friend and her thesis: One  recent email question was:

"The more I think I've 'finished' your trilogy, the more I feel I'm only skimming the surface and that there is much more to see. I've come across sources that place Morgaine/Morgause's first appearance in literature in Geoffrey of Monmouth's Vita Merlini (1150) and Historia Regum Britannia (1136) respectively rather than in the earlier Welsh legends. The Arthur/Morgaine incest story doesn't appear until Mort Artu (early 13th century).  Can you point me in the right direction and correct me if I'm wrong.

"Another question is regarding the children in the novels. The amount of detail you've included recreating their childhoods is both unique and amazing. However, a number of them have very unhappy childhoods (almost all children except Gwenhwyfar and her children, as far as I can tell):  Arthur and Morgaine were abused by Morgause; Winnifred was unloved by her family; Cerdic is over-indulged, but not loved, and in turn, is eventually hated by his son; and Cadwy is scorned by Ambrosius.  I was wondering about the social context of the stories - was there anything that would have affected the way you wrote the children's stories?

"Your characters are fascinating and so real, I feel that I want to know everything about them and how they came about.  Honestly, it takes an incredible talent to create 'people' rather than fictional characters."

(Blush - but isn't that last sentence a nice thing to say?) 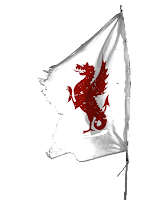 My answer went something like this: (Warning, may contain spoilers)

Yes you are quite right about the Morgause/Morgaine/Lady of the Lake character appearing later than I set my trilogy, [5th/6th Century] but Mordred/Medraut is there in the older legends and his back-story fitted with a Morgaine character. I also wanted him to be on Arthur’s side at the end, so had to develop him towards that aim. I also wanted to use Glastonbury Tor in its pre-Christian setting – but without the magical side, so again Morgaine fitted... and Morgause was such a delightfully horrible character to write, she had to stay in! I also felt their underlying characters fitted well into the pre-Medieval tales... so I used them as mother and daughter, but in my own imaginative way.

The children. Hmmm you make an interesting point, one I hadn’t consciously thought about. Gwenhwyfar’s three boys - Llachue, Gwydre and Amr, were very much loved by Arthur and Gwenhwyfar, but they had to die because they never appeared as adults in any of the early stories or Welsh legends. They were mentioned though: a son who died in battle, one killed by his father (Arthur the soldier) and one killed by a boar. As an author of fiction these brief  'facts'  needed to be interpreted and incorporated into my version of the story of Arthur. While writing the scenes of the deaths of these three  children, I sobbed for hours. Especially one scene which I imagined while on holiday camping near the River Wye when my own daughter was only about four or five years old.

I needed a reason for Medraut/Mordred, as an adult, to go to join Arthur, and I wanted to be completely different to the usual, familiar, tales. Morgaine, his mother,  did love the boy, but poor girl, because of the abuse by her horrid mother when she was a child, she was quite mentally unstable by the time we get to her and Arthur being in Avalon in ‘France’. Had Medraut survived Camlaan I think he would have been a good chap. I liked him. Morgaine was devoted to Arthur because he was the first person in her entire life to be kind to her. She never forgot his smile, and never stopped loving him. Of course, she - nor Arthur - had any idea that they were half-brother and sister until it was too late.

For Cadwy, son of Ambrosius Aurelianus, I needed a reason for him to turn from Ambrosius to Arthur, plus their relationship was an ideal ‘plot mechanism’ to get across the difference between Ambrosius v Arthur’s ideals, the former, a staunch Roman, certain that Rome would return to Britain, the latter as certain Rome was finished and treaties had to be made with the incomer Anglo-Saxons. Opposing views, which caused great conflict.

Ditto Cerdic – I had to make his preference for supporting the Saxons believable. What triggered his character for me was that his name is British, yet he led what was to become the West Saxons. Who was he? A son of Arthur was an obvious conclusion.

And to any social reasoning? No nothing really. I originally started writing the books in the mid 1970s, so I would have been in my early 20s. I started writing the trilogy properly (i.e with a determination to write a novel and get it finished) in 1985 when my daughter was three and had started playgroup. A 'now or never' situation.

So why create these unhappy children? I do not think I wrote this consciously (apart from Morgaine).  I was a lonely child, very shy and very lacking in self-confidence, had very few friends, and preferred the company of imaginative friends from the pages of books. I think my extreme short sight was the reason behind all this. When you cannot see you make enormous blunders, which means people laugh at you. Better to stay quiet and unnoticed in the background, nose stuck firm in a book where the people within do not mock you.

Perhaps it is interesting that my pirate character, Jesamiah Acorne from my Sea Witch Voyages series also had a dreadful childhood - but just as with Arthur, as an adult he is self-confident, competent and well, a Hero.

I will admit to making my characters confident and self-assured because I am not! 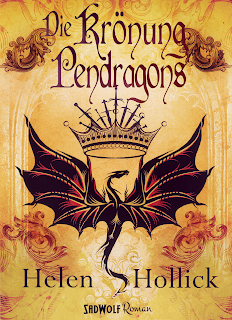 Die Krönung Pendragons: Pendragon-Trilogie: Band 1 (Pendragons Banner-Trilogie) or The Kingmaking in German, published by SadWolf Verlag ... click here for Amazon Germany - or for my page on an Amazon near you click here

What are your views about Arthur's women? Do leave a comment below!