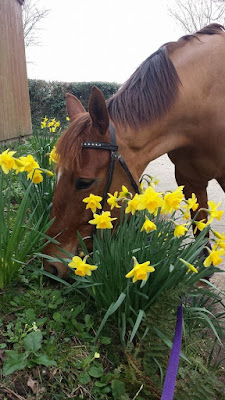 The one thing that keeps most people going through the long, dark, usually cold and wet dark days of a British winter is the prospect of spring returning come February.

The first signs are the snowdrops. Here on my 13 acre ‘estate’ (well, ok, farm) the bank alongside our lane is smothered in these beautiful little bell-like white flowers – last year they appeared in early February. They are followed by the bright yellows and oranges of the daffodils, narcissi and the primroses. Apparently, yellow attracts the bees, which is why most spring flowers are sunshine yellow.

Again, the banks along the lane, and my ‘rustic’ garden (a code word for very overgrown) are covered in flowers – it never ceases to amaze me just how many different types of daffs there are – when buying a bunch from a shop, you’ll probably get the familiar golden yellow with the large ‘trumpet’ in the middle, but you can get a huge variety of different yellows, lemons, whites,  and orange tinged... I love the smell in my house when I come down first thing in the morning when I’ve got a huge bunch of daffs in a vase – the scent is gorgeous.

I don’t pick the daffs from the lane – unless the wind (or the dogs or a horse) have broken the stems, but down in our bottom field there used to be a sort of shepherd’s hut (long, long, gone now) and someone must have planted daffs outside. These have now naturalised and abound in the hedge among the brambles, holly and hawthorn. Those that have wandered out into the field – and those I can reach without being scratched or stung – I do pick. Otherwise the horses will stomp on them. 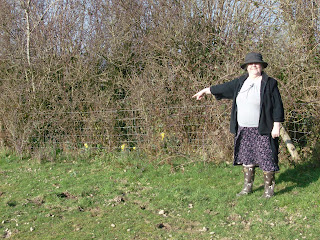 After the daffs, come the bluebells – but I’m not here to talk about them.

There is another Narcissus. He of Greek myth fame.

There are several different versions of the story, all derived from different sources. The classic, most familiar one comes from Ovid... the story of Echo and Narcissus...

One day Narcissus was walking in the woods when Echo, a mountain nymph, saw him, fell in love, and followed him. Narcissus sensed he was being followed and shouted, "Who's there?". Echo repeated "Who's there?"

She eventually revealed her identity and attempted to embrace him but he told her to leave him alone. Heartbroken, she spent the rest of her life in lonely glens until nothing but an echo sound remained of her. Nemesis, the goddess of revenge, heard the story and decided to punish Narcissus. Come the summer it was hot and he was thirsty so the goddess lured him to a pool where he leaned over the water and saw a beautiful youth. Staring back at him. Narcissus fell deeply in love, not realising that he was looking at himself. Unable to leave the allure of his image, he eventually died, still staring at his reflection. What remained of his body disappeared, and all that was left was a white and gold narcissus flower that grew in the spot where he died.

It is unfortunate, however, that such a beautiful little flower, and such a sad story is today reflected (excuse the pun) in a rather insidious human trait. Narcissism.

Narcissism is the pursuit of gratification from vanity or egotistic admiration of one's idealized self-image and attributes. Narcissism, or pathological self-absorption, was first identified as a disorder in 1898. The American Psychiatric Association has listed the classification narcissistic personality disorder in its Diagnostic and Statistical Manual of Mental Disorders (DSM) since 1968, drawing on the historical concept of megalomania.

It is distinct from egocentrism or egoism, and from healthy forms of responsibility and care for oneself. Narcissism, by contrast, is considered a problem for relationships with self and others, and for maintaining a functional culture. It is one of the three dark triadic personality traits – the others being psychopathy and Machiavellianism. There are four dimensions of narcissism as a personality variable: leadership/authority, superiority/arrogance, self-absorption/self-admiration, and exploitative/entitlement. It is a personality disorder which often reflects traits related to self-importance, entitlement, aggression, and dominance. Also, sometimes, a defensive and fragile grandiosity, which functions as a cover for feelings of inadequacy.

Although most individuals have some narcissistic traits, high levels of narcissism can manifest into a pathological form, whereby the individual overestimates his or her abilities and has an excessive need for admiration and affirmation. Some narcissists may have a limited or minimal capability to experience emotions.

Freud's idea of narcissism described a pathology which manifests itself in the inability to love others, a lack of empathy, emptiness, boredom, and an unremitting need to search for power.

Sexual narcissism can be an egocentric pattern of behaviour that shows an inflated sense of ability and entitlement. It can be the preoccupation with oneself as a superb lover through a desire to merge sexually with a mirror image of oneself. It is an intimacy dysfunction in which sexual exploits are pursued, generally in the form of extramarital affairs, to overcompensate for low self-esteem and an inability to experience true intimacy.

In the workplace, individuals high in narcissism are more likely to engage in counterproductive work behaviour that harms organisations or other people. The narcissistic manager will have two main sources of narcissistic supply: status symbols like company cars or prestigious offices; and flattery and attention from colleagues and subordinates. High-profile leaders have only one thing on their minds: profits. Such narrow focus may yield positive short-term benefits, but ultimately it drags down individual employees as well as entire companies.

Or, alas, an entire country. 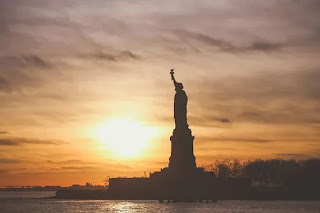