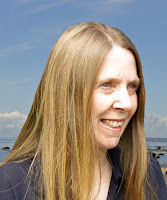 First, we should introduce ourselves:


We have had a varied career working together as field archaeologists before sliding sideways into history, but we have always written books about archaeology and history, and we now write non-fiction history books full-time.

For several years, we have been researching and writing about naval history, with three books published – Trafalgar (called Nelson’s Trafalgar in the US), The War for All the Oceans and Jack Tar: Life in Nelson’s Navy (though you may see a different subtitle on the paperback version!). These naval books are all set within the lifetime of Jane Austen (1775–1817), who herself had two brothers in the Royal Navy – Frank and Charles. When we started work on our latest book, Eavesdropping on Jane Austen’s England, about the real way of life on land, we were therefore building on the research we had already accumulated.

It would be easy to get carried away with descriptions of our latest book, but having discovered Helen’s interest in horses, we thought we would offer a few words on that topic. People are often surprised to learn that warships smelled and sounded like farmyards, owing to the number of animals kept on board, such as pigs, cows and bullocks. Because horses were not eaten, they were rarely encountered on board, unless being transported for the army. On land, the situation was very different – horses were everywhere. They are known to have been used in Britain as a means of transport since the Bronze Age, but the manufacture of iron tools and fittings from the subsequent Iron Age and then the Roman period enabled horses to be be adopted widely for riding, pulling carts and chariots and ploughing.

The Celtic goddess Epona was worshipped across Europe, including in Britain, and she was so important that her cult continued after the Roman conquest – she even had her own festival at Rome on 18th December. The goddess was depicted in sculptures as a woman, but always with horses, and sometimes she holds a cloth (mappa) that was used to start Roman horse races. Horses themselves seem to have been ritually sacrificed – complete horse skeletons and sometimes just the skulls have been discovered in archaeological excavations of Iron Age and Roman sites in Britain. Although the Romans had a formidable army, it relied mainly on foot soldiers – the legionary infantrymen. The army did recruit specialist, auxiliary troops from other nations, including cavalrymen, but it was only in the late Roman period that the cavalry came into its own in western Europe. The Roman conquest of Britannia was done mainly by infantrymen marching from place to place. 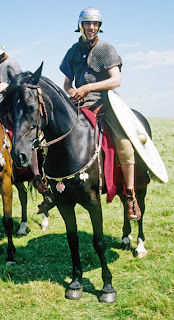 From at least the Norman conquest in England, horses were the preserve of the wealthy as a means of transport, while the ox was more often used for pulling ploughs and waggons, and this was certainly still the case in the 18th century. Nowadays, communications are so fast that it still comes as a shock to realise that in the time of Jane Austen, only two centuries ago, nothing moved faster than a galloping horse – the same speed of transport as the Romans! Jane Austen was always concerned about accuracy in her own novels, and she pointed out the problems of transport in a story that her niece Anna had written: “They must be two days going from Dawlish to Bath. They are nearly 100 miles apart.” A journey from Dawlish in south Devon to Bath then involved an overnight stop at an inn. Today, it is a drive lasting two or three hours by car.

The well-off in Jane Austen’s era would own horses to ride or to pull their carriages, while the not-so-well-off could hire horses from stables, which were usually attached to inns. Poor servants (mostly male servants) might get a chance to ride errands for their master, although they were not always reliable riders, as William Holland found. He was vicar of Over Stowey in Somerset and was annoyed to discover how his servant had treated his horse: “Mr Robert among his other excellencies has been in the habit of wearing my spurs. I have once or twice had a hint of his riding hard and now I have found out the method he takes to get his horse on.” Across the other side of England, at Weston Longville in Norfolk, the Reverend James Woodforde also had problems with his servant: “Ben went yesterday afternoon with a Mr. Watson, steward to Sr. John Woodhouse to Kimberley Hall, where having made too free with the Baronets strong beer, fell off his horse coming home and lost her, so that he walked about all night after her and did not find her till about noon.”

Transport was dominated by the horse and rider, just as it is by the car today. Stagecoaches ran on regular routes, like trains and buses today, but private carriages with horses and a driver could also be hired – at a price! The roads were so bad that the veteran tourist John Byng firmly believed that riding on horseback was the only viable method of travelling: “Whoever speaks of touring in chaises or phaetons, (as many ignorants will,) let him attempt to travel thro’ these grass farms and rough roads; and then he will recant and say with me, – there is no touring, but on horseback.” In the West Country the roads were so bad, and sometimes so narrow, that carriages and carts were not used as much as elsewhere. Instead, goods were carried in panniers on the backs of ponies or mules, or even dragged on sledges. This has left its mark on the region, with narrow packhorse bridges surviving in many places and town markets often being called ‘Pannier Markets’.

The main roads themselves have left their distinctive mark on the landscape, with the various tollhouses and milestones that are dotted along many minor roads. Such survivals show that these were the motorways of their era – privatised toll roads that were relatively well maintained and provided the best routes between major towns. Jane Austen herself is often portrayed as writing in a peaceful country cottage, but the room where she wrote in her house at Chawton in Hampshire directly faced the London to Winchester turnpike, a few yards from where it joined the turnpike to the teeming naval base of Gosport and Portsmouth.
The house had been an inn for a few years, taking advantage of the passing trade, and when Jane Austen lived there, all kinds of civilian and military traffic went by on its way to and from the capital. Passengers riding on the top of stagecoaches could look down into the front windows, and the thunder of traffic shook the beds at night. Jane only had to look up from her writing to see all life passing outside her window.


Horses were an integral part of everyday life in England 200 years ago, but they are only one of many aspects of the period that which we researched for our book. We could go on to talk about how quill pens were made from feathers plucked from live geese or how toothache might be treated by the local blacksmith, but that would take up too much of Helen’s blog. You can find out more about us and all our books, or sign up for our free email newsletter, on our website but if you really want to know about the England in which Jane Austen wrote her classic novels two centuries ago, you will just have to read the book! 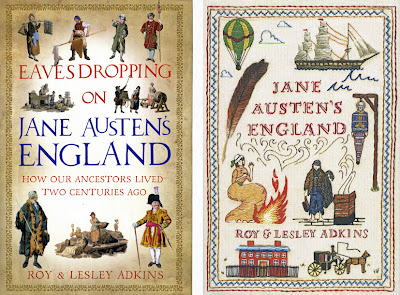 Their latest book is Eavesdropping on Jane Austen’s England: How Our Ancestors Lived Two Centuries Ago published May 1st 2014 in Paperback
hardcover, ISBN 978-1-4087-0396-0, and in all e-book formats).

Helen says: Thank you Roy and Lesley - I have a copy and it is wonderful! Expect lots of gleaned information to appear in my Sea Witch Voyages!