Five and twenty ponies,
Trotting through the dark –
Brandy for the Parson, ’Baccy for the Clerk.
Laces for a lady; letters for a spy,
Watch the wall my darling while the Gentlemen go by! 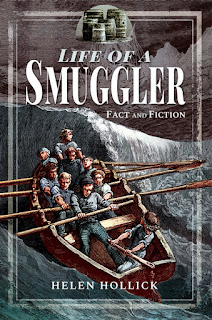 Smuggling. The very word conjures an image of a quiet moonlit night, a tall ship rocking gently at anchor out in a slightly wind-ruffled bay and men wearing three-cornered hats making their swift, but silent, way along remote West Country lanes that zigzag between high banks and thick, foxglove and cow-parsley-strewn hedgerows. The men are leading a string of pack ponies tied nose-to-tail, their hooves muffled by rough sacking. On the ponies’ backs are casks of brandy or kegs of tobacco… But is that how smuggling really happened?

In reality, smuggling is the illegal importation of goods, and unfortunately, the rogues and ruffians who were the real smugglers corrupted the subtle bending of the law to extremes of criminality. What started with the relatively harmless smuggling of everyday items by a small group of villagers and fisher-folk was swept aside by viciousness, bloody battles, torture and murder by the huge smuggling gangs of Kent, Sussex and Dorset. Alas, derring-do romantic rebels the majority of these smugglers were not.

Our imagined view of smuggling and smugglers, like most romantic illusions and ideals of the past (or even the present, come to that) originate from Hollywood, TV and novels. Fiction and poetry have heightened these myths: Moonfleet, Jamaica Inn and Rudyard Kipling’s A Smuggler’s Song, probably more well known as Watch The Wall My Darling, or As The Gentlemen Go By, have been much loved for many years. Kipling’s talent for turning emotion, imagination and the excitement of adventure into prose and poem comes to the fore in his poem. Despite its romantic lilt it sums up the more accurate truth of the smuggler and his secretive, nocturnal occupation. Its words and underlying meaning fit the facts behind smuggling far more than any Hollywood movie.

Even so, the average smuggler of the seventeenth and eighteenth centuries was very far from Kipling’s poetic view or the perceived Big Screen hero. But we are as much fascinated by the idea of the eighteenth and nineteenth century smuggler as we are by their counterpart brethren, the pirates. And the facts are interesting, but the fiction can be more exciting... or maybe not...?

Want to read more about the fascinating facts
(and the fiction) of smuggling?