my cat, Mab
Second Chances
by Nicky Galliers
Until a few days ago, I would have said I had four cats - Neddy, Persie, Floki and Hero. Today, however, I have just the three. Losing a pet is always traumatic, whether it is a cat, dog, iguana, or something much larger. Or smaller. Even losing my pet rats left a void. 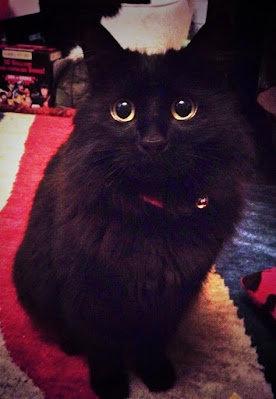 Neddy had a story with us; he also had a story we didn’t know and we are still intrigued. We’ll never know how the scrap of black fluff came to be in our garden, where he’d come from or why he was no longer in a home of his own. We knew he’d had one, knowing which end of a litter tray was which and not being fazed by hairdryers subsequently gave that away. He was quite desperate, hungry, growing more and more matted, less and less fearful of us, until we were able to put a collar on him with a magnet attached that opened the catflap and let him choose. He came in and he didn’t leave. 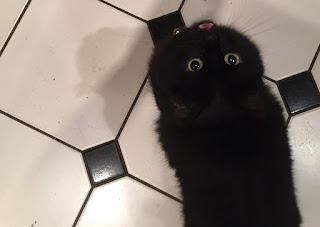 Neddy was small, fluffy, and very pretty, with eyes that made him look like a manga or anime illustration, so much so that we had assumed he was a she and his first name was Eleanor (my daughter had just watched Disney’s Brave and liked the mother’s name). Fearing Eleanor was un-neutered in those early days, we had booked to take Eleanor to be ‘seen to’ under a scheme where participating vets neuter strays for free. It was during that operation that the truth was revealed - Eleanor was a boy. With the need to rename him, I chose Neddy, short for Edward the Furred. The vet, rather embarrassed at having missed it before they’d operated, wished us speedily on our way. 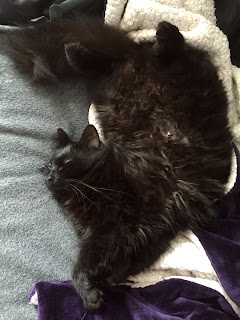 For all he was little, Neddy had a big personality and soon became as loved and cherished as our other two cats. He’d sleep on the bed, stretch out his fluffy tummy, upside down as they do, snuggle on laps and, if he disapproved of his dinner, would go out and find a mouse instead, deliberately munching on it in front of us to make a point. We created a backstory for him - for the children -  that involved him having fallen from a witch's broomstick, his sharp moods appropriate for such a lost creature, and we joked every Hallowe’en he was out looking for her. 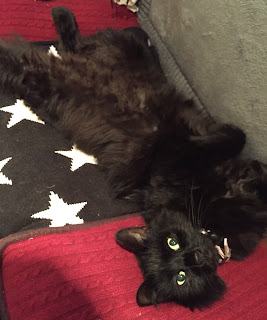 And so we came to his demise. He grew weak - we had no idea of his real age - and he lost his fluffiness. His attitude grew as he shrank, violently refusing to be groomed - my thumb still bears the imprint of his teeth from my final attempt to brush him. His appetite remained. My call to a neighbour to apologise for him having stolen a whole dressed crab from her kitchen counter has to rank as the most embarrassing call I have ever made - and I have two children - and became a highlight in a period that, for him, had few. He was a friend to other neighbours who also came to love him for all his raggedness. A young solicitor living two doors up told us how Neddy had been a companion to him while he waited for a cancer diagnosis during the solitude of lockdown.
Then, finally, we left him one night, with one of the other cats, Persie, sleeping on the cushion next to him, and found him gone the next morning. 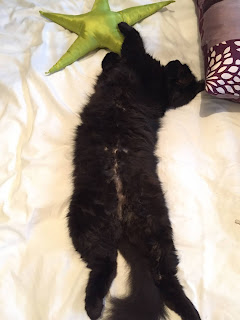 Neddy found his second chance with us, and we were grateful to him for the years he gave us. He was, as is every cat, unique and special.
< Previous Post