When I lived in London, prior to January 2013, I was an avid BBC Radio Four Archers fan. I'd tune in every evening for that fifteen minute slot at 7pm, avidly glued to the unfolding drama of 'everyday country folk'. 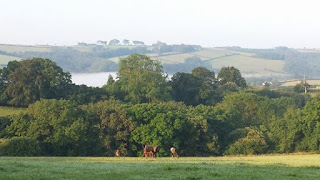 Except the everyday drama was starting to become over-dramatic - even back then.
What had happened to the every-day stuff of getting in the harvest, seeing to the pigs, attending the local show with the prize young bullock? Instead, we were getting brides jilted at the altar, Brookfield (the main farm) about to be sold, torrid affairs... I lost interest.
I liked The Archers because it gave me a slight (OK tentative) connection with being in the country - and believe me, when you live in a place like Walthamstow, a somewhat run-down North East London Suburb, every link with fresh air and open spaces - no matter how tentative - is a pleasure!
But things started getting too unreal in the make-believe farming world. The fictional village of Ambridge,  in the equally as fictional Borsetshire,  weather seemed to be very different to what everyone else was experiencing. While England baked - Ambridge had no worries about water shortages. While England abandoned flooded houses - no one even thought about the water level of the River Am (this  despite the character Linda Snell being flooded out a few years previously.)
And then we moved to Devon. We were now in the heart of the very real thing - with an old farmhouse that used to be a dairy, thirteen acres of land, our own hay-harvest and various livestock to look after. (so the goose, ducks and chickens are pets not farmstock, but that isn't the point.) 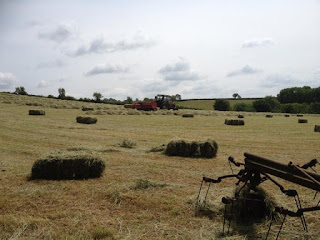 Fast forward to 2021.
I recently started listening again on a Sunday morning. No specific reason apart from it was a good excuse to have a lie in. I got interested - a little - a couple of the storylines were, well, good stories dealing with problems. Like modern day slavery and alcoholism. Which again is fine... but...
There's a bit about pigs (Rex is trying to find new land for his future sausages - miserable Elizabeth has just said no to using her overgrown woodland. (Rex! Please bring your pigs here we desperately need our brambles cleared!) There's a bit about re-wilding (I'm not quite sure what that is - letting the land do its own thing? Like our woodland is doing?)
It's all drama though. OTT repetitive, unexciting, drama.
And frankly, we all ought to move to Ambridge because beyond an occasional mention of 'social distancing', not one of the residents seem to have had to deal with lockdown.
I used to like the realism. I used to like the 'everyday story' of 'everyday folk.'
Sad to say I giving up listening.
When you have the real real thing to look at out of your study window, without all the turmoil, strife and stress of one conflict or crisis after another, why bother with the unreal?
<  previous post