Caveat: may be controversial, but these are my thoughts on my blog...
The Matter of Eating Meat.
Now, I have several friends who are vegetarian, although I'm not sure if any are Vegan (I guess there are a few who follow me on this blog, on Facebook, Twitter etc.) Veganism, to my mind can take things to a rather silly extreme when it comes to not eating honey because collecting it is cruel to bees, or not shearing sheep because it is cruel. (Actually, its cruel to NOT shear sheep!) What's the alternative then...? Man made plastic based fibres? Sorry I'd rather have natural wool. Would we care so much about bees if we didn't have the joyous benefit of their honey? (Which also has medicinal qualities, Manuka Honey, for instance - although all honey canhelp heal minor wounds) Is Soya really OK? It is used a lotin processed food - which has artificial ingrediants which are not good for us but more important, the popularity of soya means more of it is being grown - and is one of the huge causes of deforestation, so I would argue that Soya is doing far more damage to the climate than methane from animals! 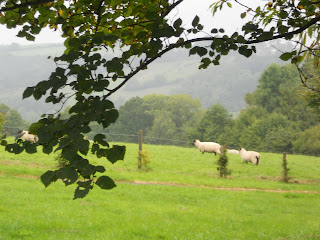 As with politics and religion, each to their own I say. But I do get annoyed when I'm ear-bashed about my preference for voting for XYZ party, for not believing in God/Jesus - and for enjoying eating meat.
I happen to believe that Mr Johnson did a good job for London when he was Mayor, I also happen to think he's doing his best now, as Prime Minister (I also think he should select his aides better and booted some of them out earlier.) And I will add for good measure here, I don't give a monkey's rattle how much is paid for redecorating the Number Ten flat - as long as it wasn't me, or other taxpayers, who paid for it. Frankly there are FAR more important things that moaning politicians should moan about ... except I wish they would all stop moaning and behaving like a bunch of pre-adolescent spotty school kids and grow up! Also for the record, I thought that Blair did a good job ... until he blew it. I also voted for Thatcher way back when, because I thought it was time we had a female PM. That went very wrong didn't it!
Did you know that one of the biggest liars in the course of British Politics was the man many people revere as a hero? I admire Winston Churchill for getting us through the war, for his skill of oratory - but as for telling the truth...? He rarely did so. But then, how many of us actually expect politicians to 'tell the truth' anyway? None of them do.
Anyway... I am not religious. I believe in Nature and the natural wheel of life. The natural turn of the seasons. The Force of Mother Nature that is within us. (A pity Star Wars rather spoilt that concept.)
So no, I do not want to be converted, and I really don't care if you won't rest until you help me  find Jesus. I'm not even looking for Him.
I am rather fed up with this lecturing about not eating meat though. Yes, Global Warming IS important, yes, cows 'fart' a lot (so does my elderly husband! LOL) so do our horses... the point is, cattle, when grazing naturally (in open grass fields) also do a LOT of good. They organically fertilise the land - which is essential to grow cereal crops. Grass is one of those plants that to grow efficiently (and therefore release the essential things we need to put back into the atmosphere - as also do trees) it has to be cut regularly - cows do an excellent job at this, so they are doing what nature intended. Also the methane they produce is naturally spread.
What SHOULD be shouted about, and in my opinion, stopped NOW are these huge indoor barns where hundreds of cattle are kept confined. OK these places might have huge advantages for the farmers (well, jailers) but cows eat grass. Cows live in  fields not barns 24/7. And by cows I man cattle ... the bullocks as well as the heifers.
Deforestation for cattle to graze should also be stopped - if people stopped buying cheap, imported meat and bought local produce this issue could be curtailed. 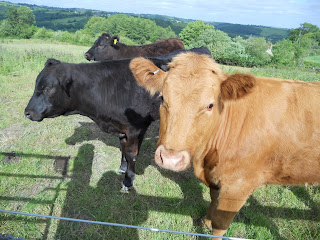 I love going into our nearest town here in Devon  because the dairy cows are out grazing, sometimes you have to stop and wait while they are brought in for milking. Believe me, waiting in a queue of traffic for the cows to amble across the road is far better than waiting for boring traffic lights to change!
I love a bacon sandwich, a juicy steak, roast chicken or lamb - turkey at Christmas. As long as the animals are kept in good welfare standards, and are slaughtered humanely. I wish more people would fight for the humane cause rather than keep banging on about not eating meat. Pigs should not be penned in metal crates, hens should not be kept in A4 sized cages, cattle should graze in fields...
I don't mind providing vegetarian meals for my vegetarian friends if they come to visit. I do mind being lectured by total strangers about not eating meat. None of my friends do so, which is why we're friends - we respect each other's preferences.
And I  guess this is the whole point of my thoughts today ... RESPECT each other's preferences. Don't lecture just because someone doesn't think the same as you, and don't insist that others should have the same ideas, beliefs or interests as you.
You're you. I'm me.
I do think you should all read my books though!
< Previous Post