C is for... (Man in the) Canary Waistcoat 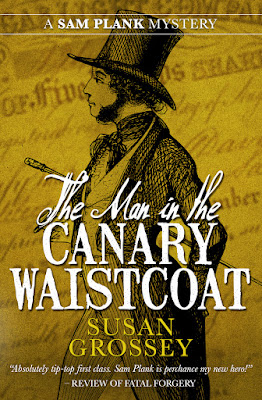 HH : Hello! I believe you exist in Susan Grossey’s  novel – what is the title of the book, and would you like to introduce yourself - who you are, what you do etc?
I am Constable Samuel Plank, and I am the narrator of a series of books including “The Man in the Canary Waistcoat”.  I am a magistrates’ constable, which is a job that no longer exists in your modern world.  In 1820s London, where I live, there are seven magistrates’ courts where cases are heard.  If someone fears that they are the victim of a crime, they can take the matter to their local magistrate who may well issue a warrant for the arrest of the suspect.  It is my job to apprehend him and bring him in for questioning.  As you can imagine, I meet all sorts of people, but I try to treat them all fairly – although some do try the patience.

HH : Where and when are you? Are you a real historical person or did your author create you?
I live in what you might call the late Regency period – King George IV is on the throne, and a right mess he’s making of it too.  My job is certainly real, and indeed there was a constable called Sam Plank who occasionally gave evidence at the Old Bailey – his name appears in their transcripts – but personally, I was created by my author. 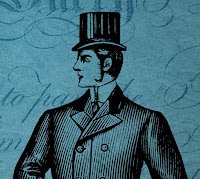 HH. In a few brief sentences: what is the novel you feature in about?
People always think that what is happening to them is new and original, but I read my history and I know that we are creatures of habit and repetition.  I am told that your modern newspapers are full of stories about investment frauds – people being induced to put their money into all manner of mad schemes.  In 1825 we were no different.  And in “The Man in the Canary Waistcoat”, I am called upon to find out what is causing otherwise sensible people to throw caution to the winds and invest in the great invention of the day: gas lighting.  For some of them, I am afraid, it does not end well.

HH :  I ‘met’ my pirate, Jesamiah Acorne on a beach in Dorset, England -  how did your author meet up with you?
In the first book in which I appear – “Fatal Forgery” – there is a banker called Henry Fauntleroy, who is stealing from his own customers, and I have to arrest him.  Once she had written the whole story from Fauntleroy’s point of view, my author realised that she liked me much better (which is not much of a compliment – the man is a criminal) and that I would make a good narrator, with my keen eye for observation and my love of truth and plain-speaking.

HH : Tell me about one or two of the other characters who feature with you - husband, wife, family? Who are some of the nice characters and who is the nastiest one?
It is no secret that my wife Martha is one of my great strengths.  She is a woman of keen intellect and good humour – both of which she needs to endure life married to a constable.  I am also doing my best to bring on a young constable, William Wilson.  Like most young men he can act in haste, and his temper does get the better of him at times, but I have high hopes that I can make a good officer of him.  As for the nasty ones, well, I have met plenty.  In this book, I fear the title character; he is dangerous because he is clever, and willing to bide his time.  I feel sure our paths will cross again.

HH : What is your favourite scene in the book?
It is not very dignified, I know, but I do enjoy remembering my visit with Martha to the London Mechanics’ Institute, when we wanted to find out about who had attended their lectures.  The man who answered our questions was quite a character, and how Martha and I managed not to laugh in his face, I will never know.  Mr Baines, that was his name – although now we simply refer to him as “All Ears”.

HH : What is your least favourite? Maybe a frightening or sad moment that your author wrote.
I do not wear my heart on my sleeve, as Martha would tell you: it is enough for a man to bear his own sadness without visiting it upon others.  But in this book I did want to explain why I had become a constable – after all, my first profession was that of barber – and it caused me great pain to recall that.  It is not something on which I would choose to dwell.

HH : What are you most proud of about your author?
My author is self-published; she did offer me to various publishing houses, but they all said that no-one was interested in financial crime, which is plainly nonsense.  So I am proud that she has done all of the work herself.  Also, she is very disciplined: we work hard together, to bring out a new Sam Plank story every October.

HH : Has your author written  other books about you? If not, about other characters?
How do you feel about your author going off with someone else!
Although I was initially supposed to appear only in “Fatal Forgery”, I managed to convince my author that I had plenty more to say.  And so she has planned a series of seven books for me, set in successive years: “Fatal Forgery” (1824), “The Man in the Canary Waistcoat” (1825) and “Worm in the Blossom” (1826) are already out, and we’re working now on “Plank 4” (1827) – we must think of a better title – for publication in October 2016.  Although she has written dozens of non-fiction books about financial crime, I am her only fictional creation.  Someone did suggest that once I have retired (after book seven), she might do a series about Wilson, but I’m not sure that is at all suitable.

HH : As a character if you could travel to a time and place different to your own fictional setting  where and when would you go?
I was lucky enough to witness – indeed, participate in – the setting up of the world’s first two police forces, in London and Gibraltar.  I would very much like to travel forward a century – to about 1930 – to see how these two forces are faring, and whether others have been created in their image.  And as someone who does not support the indiscriminate use of the death penalty, I would like to see whether cooler heads have prevailed and a more humane approach is being taken to understanding why people commit crime.