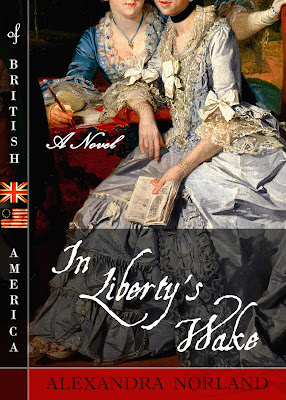 HH: Hello! I believe you exist in Alexandra Norland’s novel – what is the title of the book, and would you like to introduce yourself - who you are, what you do etc?
It isn’t often I get out from between the covers of In Liberty’s Wake, so thank you for inviting me today. My name is Arabella Alden and I am a fourth generation Virginian.  As to your inquiry regarding what I do per se, it varies, depending upon the season and at what point during my twenty novel-years you visit me. In my youth my mother saw to it I was well educated and rarely idle, which, as it turned out, was a very good thing when the war started.


HH: Where and when are you? Are you a real historical person or did your author create you?
My family, our people, and friends live in the British colony of Virginia in the years before and during the American Revolution, 1763 to 1783. My parents own Alden’s Hope, a plantation on the James River, as well as a prominent house in the colony’s capital of Williamsburg. Alas, I am not a real historical person but some of my acquaintances are.  For a week in 1766, as a guest at another plantation, I had the pleasure to become acquainted with Mr. Thomas Jefferson. One evening we provided impromptu musical entertainment for our friends; he jovially played his violin and I the harpsichord. Thomas is an excellent violinist, perhaps the best in the colony.


HH: In a few brief sentences: what is the novel you feature in about?
Family, love, friendship and loyalty and what happens to those relationships and bonds when great change and conflict arise amongst us. It’s also about our daily lives in eighteenth-century Virginia, and the circumstances that contributed to some of us remaining loyal to the king, while others transformed into rebellious Americans.

HH :  I ‘met’ my pirate, Jesamiah Acorne on a beach in Dorset, England -  how did your author meet up with you?
I, and all the characters in the book, waited in the wings of our author’s imagination for many years. When she was in elementary school, at the end of a library class, she needed to pick a book, any book, and a yellow one caught her eye. When she returned to her desk and opened it she discovered it was a biography of Martha Washington. The clothes, customs, and times it described touched her in a way nothing else had to that point igniting her interest in eighteenth-century history. Fast-forward three decades later. Our author began a graduate program in museum studies but health issues arose forcing her to withdraw from school. Being at home a good bit of the time she finally noticed me and several other characters and began writing. Our stories are the seed that grew into the book we’re discussing today, In Liberty’s Wake.

HH: Tell me about one or two of the other characters who feature with you - husband, wife, family? Who are some of the nice characters and who is the nastiest one?
My dear friend Callie and I have much in common. Like me, she is the daughter of a prominent Virginia plantation owner, and in our youth, we spent many happy hours in one another’s company. Unfortunately, circumstances prompted Callie’s father to depart for England taking her and her brother James with him. We correspond faithfully, and continue to do so despite the war between the thirteen colonies and Great Britain.
It’s questionable as to who’s the nastiest character, but the most calculating one, and my least favorite, is without a doubt Benedict Arnold.


HH : What is your favourite scene in the book?
My wedding day! I won’t mention my betrothed by name in case some of your readers would eventually like to read the book, but I will say our nuptials were a simple yet elegant affair. We had a winter wedding and the scent of bayberry candles, combined with the pine, juniper, and holly boughs used to decorate the stairwell banister and mantle, smelled heavenly.  White wedding gowns were not the custom in my day, so my gown was a deep emerald-green velvet and silk ensemble, which set off beautifully the amethyst necklace my husband had given me as an engagement gift. We danced into the evening, and just as some of our guests bid us goodbye and were alighting their carriages for the in-town journey home it began to snow. It was the happiest and most enchanting of days.
HH : What is your least favourite? Maybe a frightening or sad moment that your author wrote.
There are two fires in the book I found devastating. I had been to the Governor’s Palace in Williamsburg on many occasions, as my father was a good friend of Governor Fauquier, so when the palace caught fire I did everything in my power to help. Afterward, most of the townspeople, myself included, believed the palace fire to have been an accident. The other fire, however, was no accident and was a direct result of British Brigadier General Benedict Arnold’s malice.  And to think I once viewed him as a hero!  How I despise that man.


HH : What are you most proud of about your author?
I’m most proud of the way my author gave voice to me and the others around me. She seemed to know exactly what I was thinking even before I did. It was extraordinary.


HH : Has your author written  other books about you? If not, about other characters?
How do you feel about your author going off with someone else!
In Liberty’s Wake is my author’s first novel so as yet there are no other books about me. Goodness, I never thought about her going off with someone else! Hmm, I guess having spent a decade with her it would be unkind of me to begrudge her the joy of creating new characters and another adventure. Wouldn’t you agree?

HH : As a character if you could travel to a time and place different to your own fictional setting  where and when would you go?


This may surprise you, coming from a daughter of the Old Dominion, but I would very much like to visit England in the early 1800’s and make the acquaintance of a particular lady and her sister Cassandra. I’d visit my friend Callie in London before setting off for Bath where I’d visit the pump room and take the waters. I imagine the Roman Baths would be quite invigorating. Heaven only knows what friendships and adventures await me across the Atlantic!

Thank you
For readers, you can find out more here