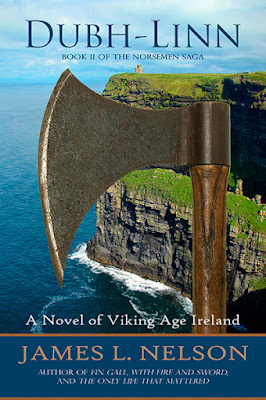 HH : Hello! I believe you exist in James L. Nelson’s  novel – what is the title of the book, and would you like to introduce yourself - who you are, what you do etc?
Who am I? My name is Thorgrim. Thorgrim Ulfsson but I’m known to most as Thorgrim Night Wolf. What do I do? Well, I can tell you what I don’t do is answer a lot of silly questions. As to what I do…I’m a seaman. A Raider. I fight. I’m what people of your time might call a Viking, though that’s not a word I would use.

HH : Where and when are you? Are you a real historical person or did your author create you?
I’m from Vik, in the country of Norway, but I swear by the gods I can hardly recall the place. I’ve been stuck in the country of Ireland for going on two years now. I came here with the jarl I served, a man named Ornolf the Restless. We came here to raid and be gone, but it pleases the gods to toy with me, and keep me here. The year, by your Christian calendar, is 851.

As to who created me, well, the gods created me as they created all things. Odin, all father. But he did it though the instrument of that mighty god of the keyboard, James L. Nelson.

HH. In a few brief sentences: what is the novel you feature in about?
Dubh-linn (which is what the Irish in my time called the city you might know as Dublin) is the second book in my saga, after Fin Gall. My son Harald, who sails with me, is sixteen, strong as a man – stronger than most – but not always so wise, as is often true of young men. He became tangled up with an Irish girl, a princess, so she says, and now she’s looking to him to get her out of whatever trouble she’s in. Women. Irish women. And all the tangled politics of this place, kings against kings, Irish against Irish, and against Northmen, Northmen against Northmen. It’s insane.

HH :  I ‘met’ my pirate, Jesamiah Acorne on a beach in Dorset, England -  how did your author meet up with you?
It was actually my son, Harald Thorgrimson, known as Harald Broadarm, who first appeared to James L. Nelson. Just popped into his head, standing there. Harald was probably lost, that happens, and ended up there in Nelson’s head. Anyway, Nelson was interested, started wondering about this character, where he was from, what he would do, where he would go. He started reading about the history of Northmen in Ireland, a soon after my sagas emerged. 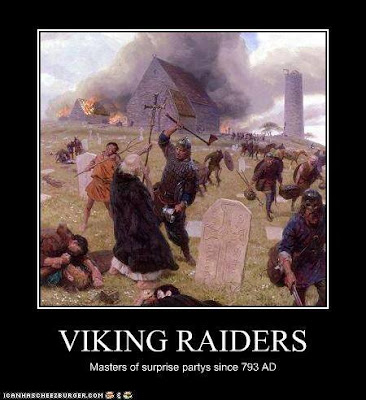 HH : Tell me about one or two of the other characters who feature with you - husband, wife, family? Who are some of the nice characters and who is the nastiest one?
Well, we seem to have a frighteningly high attrition rate on the ship Red Dragon. In fact we lost the ship itself in the first book, Fin Gall. But I still have a few who are with me. My son Harald, of course. Also the jarl I serve, Ornolf the Restless, who is also my father-in-law and so Harald’s grandfather. Most folks who read the book and know the author, James L. Nelson, think Ornolf might be the most biographical character, which is no compliment, I can tell you. Also, I have just come to know a fellow I met on the last raid, by the name of Starri Deathless. Starri’s a berserker, one of these fellows who goes mad before battle and fights with an extraordinary intensity. He wants nothing more than to be killed in battle and lifted up to Valhalla, but, alas for him, he’s too fierce a warrior, it seems, for that to happen.
As to nasty characters, one never knows who might turn on you. You have to always be careful. As it says in Hávamál, the words of Odin, all-father:

At every door-way,
ere one enters,
one should spy round,
one should pry round
for uncertain is the witting
that there be no foeman sitting,
within, before one on the floor

HH : What is your favourite scene in the book?
I’m a Norseman. A Viking. I like the raiding and the fighting.

HH : What is your least favourite? Maybe a frightening or sad moment that your author wrote.
Well, I don’t like to give away any parts of the saga, you know, but there is a moment of great betrayal, and I can’t say I’m a big fan of that.

HH : What are you most proud of about your author?
Him? James L. Nelson? He used to be something, I can tell you. Used to be a mariner, went to sea in tall ships, stood on an open deck in the wind and rain and high seas. He used to hitchhike and motorcycle around the country. Now all he does is sit at his desk and spin tales! But I suppose he does have some redeeming qualities. Been married to the same gal for twenty-three years and he’s raising four tolerably good children. Still gets to sea on occasion. Oh, and he created me and my fellows, which is a fine thing, to be sure. On the other hand, he seems to keep giving us a world of trouble and hurt, and I’m not so enthusiastic about that.

HH : Has your author written  other books about you? If not, about other characters?
How do you feel about your author going off with someone else!
Jarl Nelson has been writing pretty much full time since 1994, so yes, he’s spun some other tales on many subjects, fiction and nonfiction, though most having to do with the sea. As to my saga, he’s written four volumes to date: Fin Gall, Dubh-linn, The Lord of Vík-ló and Glendalough Fair. The fifth should be out in a few months. 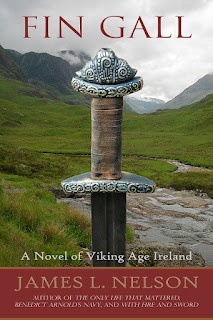 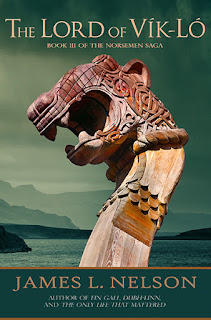 HH : As a character if you could travel to a time and place different to your own fictional setting  where and when would you go?
Where would I go? I can’t even begin to think where I would want to go. There is nothing of the past that interests me, and the future doesn’t look too promising, either. The only place I want to go is back to my farm in Vik, but this Nelson person seems to thwart me at every turn. Other than that, I wish to be lifted by the Valkyrie to Odin’s hall of Valhalla, there to fight and feast until Ragnarok. What more could a man hope for? 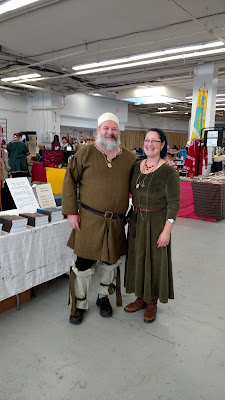 
And it just so happened  that 5th April was Jim's Birthday!