Y is for...(Josa) Young's Sail Upon The Land 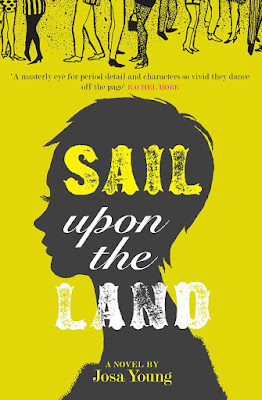 HH : Hello! I believe you exist in Josa Young's  novel – what is the title of the book, and would you like to introduce yourself - who you are, what you do etc?
I live and have my being in Sail Upon the Land. My name is Lady Sarah Reeves (nee Bourne) – I never use my title though. I’m plain Mrs Reeves, the doctor’s wife to you. I was brought up in a crumbling Victorian house in Sussex, England, which my parents were running as a sort of disorganised rooming house by the time I was born. My great grandfather’s fortune, made from a coloured raising agent for bread that he had invented, had long since been squandered. My own father looked, smelt and in fact was, a farmer. My mother, who came originally from Penge as a refugee from the Zeppelins, spent most of her time lying on a sofa as something had gone wrong with her 'underneath' from having too many babies. I was the only girl, and had three brothers. It used to make me angry that they were favoured over me, and I longed for freedom and fun. Then the war came, and I was able to avoid being a debutante and instead volunteered as a VAD – well that led to meeting my beloved Arthur, and a very happy marriage. Like all lives, there were great sadnesses as well as happiness, and my daughter Melissa’s death nearly destroyed me. Only the existence of her daughter Damson stopped me from giving up all hope. Life goes on, and family love is the most important thing of all.

HH : Where and when are you? Are you a real historical person or did your author create you?
I was born in 1920, in Sussex. I am not at all a real person, I only exist in Sail Upon the Land. Possibly I represent the kind of resilient woman whose life was profoundly changed by the social shake up of WWII.

HH. In a few brief sentences: what is the novel you feature in about?
Sail Upon the Land is about motherhood. How right and wrong it can go down the generations, and how giving birth opens us up to unimaginable grief and joy. ‘Sail Upon the Land’ is a quotation from Titania’s speech about the mother of her little Indian boy – the catalyst for the plot of Midsummer Night’s Dream - and a visual metaphor for the pregnant tummy swelling like a sail. The novel, which is set in India and England, tries to capture what it means to be a mother, even if you have died or your baby is taken away. It has been described as ‘unveiling the complexities of motherhood and feminine experience, something which is rarely written in such a raw and true way’.

HH :  I ‘met’ my pirate, Jesamiah Acorne on a beach in Dorset, England -  how did your author meet up with you?
I don’t know. I think I just popped into her head as she thought about mothers.

HH : Tell me about one or two of the other characters who feature with you - husband, wife, family? Who are some of the nice characters and who is the nastiest one?
My husband Arthur Reeves is someone I would never have met without WW2 and the mixing of the classes that it set off. He is a lovely man, an excellent doctor. He welcomed the NHS with open arms after the war, and was well known for being firm with his patients. If he was nice to them, that was when they got frightened. He did try so hard always to be the same, firm and brisk, but he was so compassionate.
My daughter Melissa was always a worry. She was such a moody child. She used to have what we called in the family her ‘glooms’, when she would want to sit on my lap even when she was a teenager. We were sure she would grow out of them, when happily married and settled. She didn’t…

I never knew what to make of my son-in-law Munty. He seemed such a shy man, but he did his best to bring up his daughter Damson on his own. Then he married that awful woman from Nottingham, Margaret. So brassy, rich and bossy. Completely took him over and I worried that she wasn’t nice to Damson, although I would never have said that out loud. She had twin daughters, very beautiful, but rather shallow. Still, life is long and things change.
And Damson, my poor darling grand-daughter, with her terrible secret. She so longed to follow in Arthur’s footsteps as a doctor, but what a price she paid.

HH : What is your favourite scene in the book?
I like the scene where I confront the Nazi officer who tried to commandeer my ambulance during the retreat to Dunkirk. I am afraid to say I was so angry that I slapped him very hard, which was nearly the death of me. But not quite. 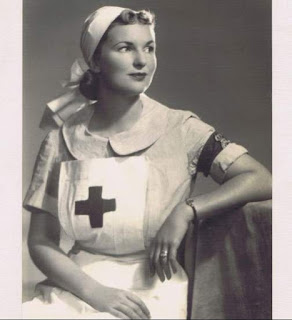 HH : What is your least favourite? Maybe a frightening or sad moment that your author wrote.
I can hardly bear to think about it, but it concerns my daughter Melissa and what happened after Damson was born. I still feel so guilty that I was too ill to go and look after her.

HH : What are you most proud of about your author?
In spite of a very enthusiastic agent, the book didn’t sell to a mainstream publisher even though her first novel One Apple Tasted was published in 2009. So she decided to publish it herself and learned everything there was to know about paperback and ebook publication in a very short time. When the Historical Novel Society long-listed it for their Indie Award 2016, I felt very proud and she felt very justified.

HH : Has your author written  other books about you? If not, about other characters?
How do you feel about your author going off with someone else!
Her first novel contains a very different set of characters, but I do have a walk-on role in the sequel to Sail Upon the Land which is coming soon.

HH : As a character if you could travel to a time and place different to your own fictional setting  where and when would you go?
I am firmly lodged in my own setting, and so relieved that I lived at a time when women’s lives were expanding out of the usual class norms. I would have hated being a debutante, and loved working at a nurse.

So call back tomorrow
(unless it is Sunday - in which case, see you Monday)
To meet the next - and sadly, the last -
exciting Character!