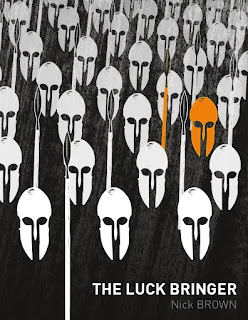 HH : Hello! I believe you exist in Nick Brown’s  novel – what is the title of the book, and would you like to introduce yourself - who you are, what you do etc?
My name is Mandrocles, I was a wild youth on the Island of Samos when my father persuaded his friend, the Greek general, Miltiades, to take me with him on his way to the Persian wars. I was there at all the key stages of the fight to save democracy. I saw how it really happened and left the true record. I passed this on to archaeologist and ancient historian Nick Brown and he put it in a series of novels beginning with ‘Luck Bringer.’

HH : Where and when are you? Are you a real historical person or did your author create you?
I’m from Greece in the 5th century B.C. Nick believes he created me but if you asked the great general, Miltiades, he’d confirm my contributions.

HH: In a few brief sentences: what is the novel you feature in about?
It’s about how the men and women of Athens lived and loved and changed the world by facing up to the unbeatable Persian army on the beach at Marathon.

HH:  I ‘met’ my pirate, Jesamiah Acorne on a beach in Dorset, England -  how did your author meet up with you?
He met my ghost on the beach at Limnionas when he was examining my father’s estate for archaeological evidence. I had to wait a long time for him. He’d researched and written about the period so was susceptible to my manipulation of him.

HH: Tell me about one or two of the other characters who feature with you - husband, wife, family? Who are some of the nice characters and who is the nastiest one?
I’ve loved twice: Elpinice, daughter of Miltiades, but she was too far above me and Lyra a flute girl who I loved and should have married. I don’t want to talk about this, it still hurts. The best man I’ve ever met is the great poet and warrior Aeschylus, my shield companion. The worst is the renegade son of Miltiades, Metiochus, who one day I will kill.

HH: What is your favourite scene in the book?
I should say it is the moment we broke the Persian centre at Marathon but in my heart it’s the night of innocent love I spent in the olive groves above the sea with Elpinice.

HH: What is your least favourite? Maybe a frightening or sad moment that your author wrote.
At the end at Marathon when we were fighting to capture the Persian ships, I killed a youth, younger than me, I should have spared him but the killing rage was upon us. I still see the look in his eyes in my dreams.

HH: What are you most proud of about your author?
Mandrocles: I should say it’s that he has walked the ground and researched the facts but the real truth is that he gave me my own voice.

HH: Has your author written  other books about you? If not, about other characters?
How do you feel about your author going off with someone else!
Yes we are stuck with each other. He has written about my journey to Thermopylae in ‘The Wooden Walls of Thermopylae’ and he is currently writing about how Athens saved the world in ‘The Curse of Athena.’
He also writes a series of archaeologically based supernatural thrillers: ‘Skendleby’, ‘The Dead Travel Fast’, ‘Dark Coven’. The fourth in the series ‘Green Man Resurrection’ is to be published next year. I don’t mind this as it gives me a break from him but I resent the fact they sell better than my story. 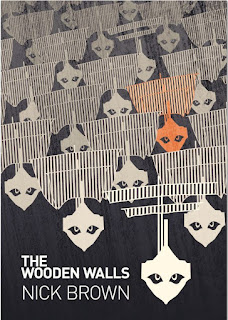 HH: As a character if you could travel to a time and place different to your own fictional setting  where and when would you go?
I would go to Skendleby in the 21st century at the time of the festival which you call Christmas. There I would enjoy the company of others of the restless dead. 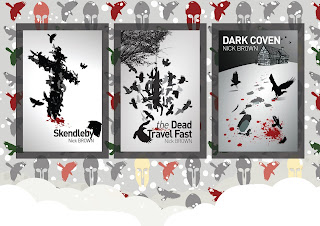 Thank you that was really interesting!
Now where can readers of this A-Z Blog Challenge find out more about you and your author?
Website
Facebook
Twitter  @NickBrownAuthor

Buy on
Amazon UK
Amazon US 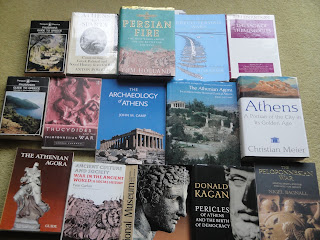