E is for Evergreen in Red and White 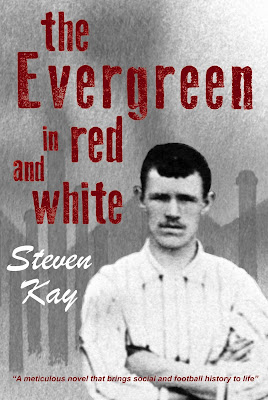 HH : Hello! I believe you exist in Steven Kay’s  novel – The Evergreen in red and white. Would you like to introduce yourself – who you are, what you do etc?
Now just hold up. I don’t know how you’re doing this. I never went in for all that hokabens – y’know old Romany folk looking into the future – just a money making trick. I’ve been dead for nigh on eighty year, lass! But anyroad, I’ll try my best, like I allus do. They call us Rab – Rabbi Howell – them newspaper types they sometimes called us “the terrier” or “the evergreen.” I were one of the best half-backs in my day – some days the very best in England. Played right up to when that lundy sod from Burnley broke us leg – they heard the crack all round t’ ground.

HH : Where and when are you? Are you a real historical person or did your author create you?
Oh right, I see. I were real enough. I were born on a hill just outside Sheffield – a gypsy see. When were it? – I dunno – a fair while back – an’ I started playing for the United in 1890. Before that I were a hewer – down t’pit. Becoming a professional footballer were one of the best things that happened to us – that and meeting Ada. That were in 1897 – what a year that were, eh?

HH. In a few brief sentences: what is the novel you feature in about?
What I just said, lass – that year when I met Ada. It were a bit awkward – ’cause I were already married – an’ it were a bit of a scandal, an’ football clubs back then were right strict about stuff like that – run on strict Methodist lines – “nobody ever gets lost on a straight road” was the watchword. Well my road weren’t that straight sometimes, shall we say. The United won the Championship that year – they wouldn’t have wi’out me – but carryin’ on got us the sack, an’ I were already a Liverpool player by t’ last day o’t’ season. Only time they’ve ever won it an’ all.

HH :  I ‘met’ my pirate, Jesamiah Acorne on a beach in Dorset, England – how did your author meet up with you?
He says he first read about us back in 1989 and spent the best part of 20 year – daft sod – wonderin’ if what were written about us were true – they said I were sacked for match fixing – I’d’ve swung for anyone who accused us of that: my only crime were to fall for Ada.

HH : Tell me about one or two of the other characters who feature with you - husband, wife, family? Who are some of the nice characters and who is the nastiest one?
Well there’s Ada of course – wi’ her beautiful blue eyes an’ red hair – Irish lass. Then Selina, the missus, and the kids: Lizzie, Little Selina, Little Rabbi and the baby. And the United team, and Victorian Sheffield – can that be called a character? Nastiest ones were the Philanthropist or the Tooth-yanker maybe – them what got us sacked.

HH : What is your favourite scene in the book?
Well I’ll let yer know summat for nowt – it’s mostly made up! That Kay fella – cheeky sod – reckons to know what I were up to, but, leastways, the football’s authentic – that game against Villa were a cracker. Me an’ Ada at the theatre – he makes us out as bein’ a right soppy sod – I never were really. Not me – not Rabbi Howell. Hard as nails me.

HH : What is your least favourite? Maybe a frightening or sad moment that your author wrote.
I didn’t like being reminded about that nightmare in Sunderland – where they said I scored two own goals – and them Sunderland fans! It were a tough year right enough. He might have made stuff up, but I reckon it were a half-decent stab at it. I don’t come out on it too bad do I? You can see fair enough why I had to leave my family?

HH : What are you most proud of about your author?
Proud? Nah – not proud on him.
He does what he likes. Nowt to do wi’ me. But gi’ him his due – me and Ada were buried in an unmarked grave in Preston, an’ they’d even got Ada’s name wrong in’t book – had us buried with a stranger it sempt. Now I’ve got a right grand headstone – fit for an England International – that’s down to him an’ his book. So that’s not bad, eh? 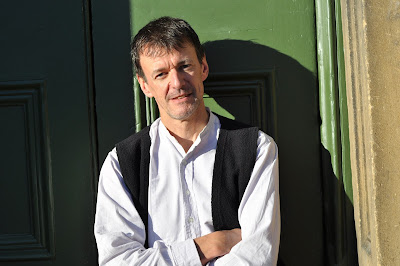 HH : Has your author written other books about you? If not, about other characters? How do you feel about your author going off with someone else!
Aye. He says he’s on wi’ stuff. Full of daft ideas if you ask me. Summat about a copper – another story from back in my day, and another about a miner of all bloody things. Says he’s sending stuff to agents but not to get him started on that.

HH : As a character if you could travel to a time and place different to your own fictional setting  where and when would you go?
Tell you what, though, I wouldn’t mind playing football these days – most I earnt were four quid a week – more than a miner, granted – but only just. Imagine if I were playing for the United or Liverpool now, eh? And another thing: you know Liverpool an’ all their money – they contributed nowt to my headstone: not a brass farthing. Preston and Sheffield Untied were there, but bloody Liverpool – they insulted me, and my gypsy curse is on them! 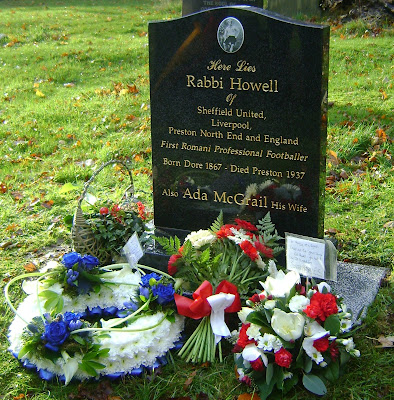