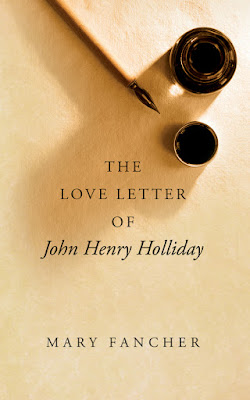 HH : Hello! I believe you exist in Mary Fancher’s  novel – what is the title of the book, and would you like to introduce yourself - who you are, what you do etc?
The title of Mary’s book is THE LOVE LETTER OF JOHN HENRY HOLLIDAY, and I am the one and only John Henry, more commonly known as “Doc.” I am a dentist by way of education, a gambler by necessity, a philosopher by inclination.

HH. In a few brief sentences: what is the novel you feature in about?
The novel is composed of my last letter to the only woman besides my mother whom I ever truly loved: my cousin, Mattie Holliday. It includes my thoughts as I write this letter and reflect on the past 36 years of my life—not always a pleasant enterprise.

HH :  I ‘met’ my pirate, Jesamiah Acorne on a beach in Dorset, England -  how did your author meet up with you?
My author first met up with me as so many other people have met up with me, by watching a movie, in this case the movie “Tombstone” with Val Kilmer. She wanted to know how much of the movie was based on fact, so she read my biography (the only decent one out there) by Gary L. Roberts. At the end of this book, she learned how my beloved cousin Mattie Holliday, who had corresponded with me throughout my time in the West, destroyed some of my letters to her shortly before her death. Well, that did it. Mary couldn’t help but wonder why only specific letters were destroyed and what was in them that made Matty so reluctant to have anyone else ever read them. This provided the inspiration for further research, and the result was the THE LOVE LETTER OF JOHN HENRY HOLLIDAY.

HH : Tell me about one or two of the other characters who feature with you - husband, wife, family? Who are some of the nice characters and who is the nastiest one?
There were so many nasty characters in my life, it would be difficult to pick which one was the worst. Ike Clanton, the snivelling bore, would certainly be right up there in contention for the top spot. I think, though, that for sheer self-aggrandizement and lack of morality or conscience, I would have to select Sheriff John Behan. The person who shines through the novel—indeed, the letter is written to her—is my beloved cousin Mattie. She entered the religious order of the Sisters of Mercy less than two years after the famous gunfight. I have often wondered if this was entirely a coincidence.

HH : What is your favourite scene in the book?
My favourite scene takes place before I ever set foot in Tombstone, Arizona. I was living in Las Vegas, New Mexico at the time, and my friend Gillie and I took a ride into the foothills just as the sun was going down. We stopped to have a smoke where we could also rest the horses. Underneath the strange blue twilight sky of early evening, with nothing but silence wrapped around us, it felt like you could ask anything, say anything, and it would be tied to nothing. When he questioned me about my leaving Georgia to come all the way out west, it took me aback; not because I’d never been asked the question before, because I had, of course I had. But this time the answer wasn’t coming easy, or maybe it was just that the easy answer wasn’t coming.

I told him I had been jilted, as simple as that. I couldn’t speak the words for what I truly meant because the words would have exploded in my heart, their substance too great a weight for me to bear. The saying of it would have breathed life into the fact, and I would never have been able to escape the pain of its presence. By saying little of what I felt, the facts remained chimera, ghosts that could be waved aside.

This was the closest I ever came to telling anyone the real reason for my leaving Georgia, and why I spoke of it then, I’ll never know. I think I just needed to remind myself that Mattie was real and that once we had been close. As I said, when you speak of something important that you’ve lost forever, when you put a name to it, it becomes too real to bear.

HH : What is your least favourite? Maybe a frightening or sad moment that your author wrote.
The saddest part in the book is when my mother finally succumbs to her illness. Her death was a lingering affair, for consumption takes years to accomplish what more merciful diseases require only days to achieve. I was only fifteen years old at the time, and when she left this earth on that sixteenth day of September, 1866, I felt something had been broken that could never be mended. For a long time, afterwards, I lived on air.


HH : What are you most proud of about your author?
Mary took the hard path in writing my story. She could have taken the easy way out as so many other writers have done, shaping a love story where there was none, making me into a one-dimensional character known only for his drunkenness and disease. She researched the history of the times and of me, determined to portray the facts with few inventions. My thoughts and emotions—my motivations, if you will—she gleaned from beneath the historical record where all human fears and desires reside only half-hidden.

HH : Has your author written  other books about you? If not, about other characters?
How do you feel about your author going off with someone else!
I was never a small minded person, so when Mary told me she was going to write a book about John Larn of Fort Griffin, Texas fame (or infamy, depending on your outlook), I was quite enthusiastic. The fact that she learned of this character while researching my book didn’t hurt. In fact, I saw John Larn when I was gambling in Fort Griffin, but I had the common sense to steer clear of him. John Larn was a most dangerous man, and his friend, John Selman, was even more so. Mary changed the names in order to fictionalize the story, and ended up with the book JOHN LEE. While we’re on the subject, I want to put in a word for Mary. Her novel, JOHN LEE, was one of the finalists for the 2014 South Carolina First Novel award. She is currently looking for a publisher for this work. It would seem a waste if she couldn’t find one...

HH : As a character if you could travel to a time and place different to your own fictional setting  where and when would you go?
I would go to any time after the cure for tuberculosis was found. And I would return to the West.