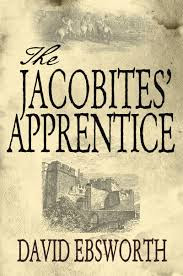 HH : Hello! I believe you exist in David Ebsworth’s  novel, The Jacobites’ Apprentice. Would you like to introduce yourself – tell us your name, and what do you do?
My name? Well, that rather depends on where, or perhaps when, you might have encountered me. If you intend that time in which so many of us were pretending – Charles Edward Stuart to the throne of England, and myself to serving as his agent – then you may have known me as William Owen. And, la! What a dance I led those Jacobite dogs while in that guise. They could have seized London, you may collect, had I not spun such a deception to send them scuttling back to their Highland hovels – and the fate they all so richly deserved. Yet, had you met me in sweeter times, you may have been graced with my true name, Dudley Striker, and in doing so exclaimed, ‘Sirrah, what a douce fellow he is!’

HH : Jacobites? That would be the Rising of 1745, I suppose. So are you a real historical person or did your author create you?
Ebsworth, you mean? The fellow claims to have created me, naturally. Based on one of German George’s spies, Dudley Bradstreet, he says. Yet a pox on him, madam. Is it not obvious that I am flesh and blood?

HH. Oh, indeed! But in a few brief sentences, might you tell us about the novel in which you feature?
Sedition, madam. It’s about sedition. Those Jacobites – Papists, for the most part – in rebellion against our anointed king, George the Second, may the Almighty bless him. And the rebels supported by rogues and Tory rascals in rats’ nests like the towns of Manchester and Wrexham. It was my job to root them out. To stamp out their damned treasons. But, God blind me, none of us could have foreseen where it would lead us all.

HH :  I ‘met’ my pirate, Jesamiah Acorne on a beach in Dorset, England -  how did your author meet up with you?
Oh, the scoundrel spins this tale about how he worked a while in Manchester itself, and only then discovered the story of the town’s part in the Pretender’s rebellion. He researched the background, he says, and came across this Bradstreet person. Inspired him to write my character – and we had our first meeting in that damn’d Manchester Coffee House.

HH : Tell me about one or two of the other characters who feature with you. Who are some of the nice characters and who is the nastiest one?
God’s Hooks! A rum bunch. Young Aran Owen, for example, adopted as apprentice to Titus Redmond, a Manchester merchant, smuggler and leading Jacobite. The foolish lad was beholden to Redmond and devoted to his eldest daughter, Rosina. But that fro’ward girl was driven by her own passions – for the local Coffee House proprietor, a tribade, no less - Elizabeth Cooper. But Redmond had other plans for the girl – a political marriage to his main rival, leader of the Loyalist faction, James Bradley – yet unaware that the fellow was already playing fast and loose all that time with Redmond’s own wife, Maria Louise. And each of them up to their necks in the rebellion too – on one side or the other. But I loved them all. They provided me with a considerable amount of amusement. Yet a nasty character? I fear that does not quite signify, madam. Unless, perchance, you might have been implying…

HH : No, not at all. Perhaps we should move on. Maybe tell us about your favourite scene in the book?
Oh, it is undoubtedly the one in which I was forced to persuade Aran Owen that he needed to act as my eyes and ears within the Redmonds’ faction. He was imprisoned at Lancaster Castle just then. A remarkable place. All manner of devices for helping one to loosen the will of even the most reluctant accomplice.

HH : What is your least favourite? Maybe a frightening or sad moment that your author wrote.
The trap that he allowed Aran Owen to set for me and seek his revenge. Blast his eyes, I swallowed the whole thing like the most innocent of bubbles. A riddle, by God’s Teeth!

HH : What are you most proud of about your author?
Proud of Ebsworth? The fellow’s nothing but a damn’d scribbler. Leaves me to take all the risks and then claims the credit. There is this secret organisation he belongs to, for example. Some “Historical Novel Society” – and he claims they saw fit to make him a finalist in a contest. For this very tome, The Jacobites’ Apprentice, which would be less than nothing without I graced its pages!

HH : Has your author written  other books about you? If not, about other characters? How do you feel about your author going off with someone else!
Indeed not! And, as I pen this missive, I lie in some Welsh prison.  At Caernarfon. Awaiting the Great Sessions, the Welsh Assizes. They tell me I may meet my end  hanging in chains on Twllhely Marshes. Well, we shall see! And that faithless dog, Ebsworth? Yes, he has left me here to rot, or worse, while he goes a-ranting about all manner of other strange places and times.

HH : As a character if you could travel to a time and place different to your own fictional setting  where and when would you go?
Travel to a different time? How fanciful. I cannot conceive of such a thing. But a different place? Of course. Did I never tell thee, sweet one, how that pampered peer, Lord Halifax, succeeded in claiming for his own almost five million acres covering the Virginia Colony’s Northern Neck, including those lands worked by my own family? Stole everything we possessed. But had I the freedom to do so, I should return there and wreak a terrible vengeance on the dog. And, strangely, I received word, while lying here, festering in this place, that the same Aran Owen I mentioned earlier has himself been invited to join an expedition to the American Colonies. As an artist. How jocose it might be if I could only find a way to escape this prison, make my way to the Americas also. Surprise young Aran, as you might say. I wonder, Good Mistress Hollick, might you have a word with that fellow Ebsworth for me?

Well, I’ll do my best! But thank you anyway. That was really interesting!

Now where can readers of this A-Z Blog Challenge find out more about you and your author?