Today's Characters are from : 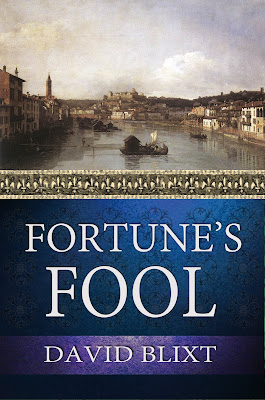 HH: Hello! I believe you both exist in David Blixt’s novel FORTUNE’S FOOL. Would you like to introduce yourselves?
Pietro: Who should go first? Do I go first?
Cesco: Certainly, Nuncle. Age before beauty.
Pietro: Experience before insolence, you mean.
Cesco: You sound like your father. (chuckle) That’s it. We’ll introduce each other. Ladies and gentlemen, allow me to present my foster-father, Ser Pietro Alaghieri, Knight of Verona and renowned jurist, but best known as Pietro di Dante. Alas, unlike his poetical father, he is not at all imaginative.
Pietro: And this imp at my side is the bane of my existence, the bastard heir to Cangrande della Scala, lord of Verona. He is called Cesco, though others have more descriptive titles for him – rascal, scoundrel, rakehell. All at twelve years old. I fear the day he is old enough to wield a sword.
Cesco: Imagine how the sword feels. Oh wait, you have no imagination. Which may be why you spend so much of your life in exile – you cannot imagine other people being less honest than you.
Pietro: I’d take that as a compliment, but I know you too well.

HH: [Wondering if she's done the right thing asking these two onto her blog]
I see, thank you... er, where and when are you? Are you real historical people, or did your author create you?
Pietro: I’m real enough. I lived in Florence before joining my father in exile, then travelled with him as his fame grew thanks to The Inferno. I wrote commentary about it. I’m in my middle twenties now, but in 1353 I’ll buy a vineyard outside Verona where my family will reside for centuries to come.
Cesco: Tied to one place for eternity – that’s my idea of Hell. But on to me. I’m a little of everything – historical, fictional, mythological, tragical-comical. Cangrande did have a bastard heir – well, several, but only one called Francesco. I briefly conjoin his life. But I was conceived by Shakespeare, and given such life that I had to disappear before I took over his play. I don’t have that name yet, so I shouldn’t say.
Pietro: You skipped mythological.
Cesco: Ah! Yes, I’m also Dante’s prophesized figure Il Veltro – the Greyhound. I have a destiny to light the spark of a new age of man. Everyone seems to know this except me. (Scowling at Pietro) I don’t like secrets.
Pietro: I know. But there are so many.

HH: Mmm, yes. Well moving on.... In a few brief sentences: what is the novel you feature in about?
Cesco: It’s about me.
Pietro: It’s about the age, the blending of Shakespeare’s Italian characters with the real people of Dante’s time. There are my friends Capulet and Montague, but there’s also Shylock, Signor Benedick of Padua, Petruchio of Verona and his Paduan wife Kate, and so many others. All of them meet Cangrande, who was perhaps the greatest leader of the age. My father dedicated the last part of the Divine Comedy to him. He is the prime mover, waging war on Padua, consolidating power in Lombardy, and even looking to supplant the Holy Roman Emperor. The only flaw is the young fool beside me.
Cesco: As I said, it’s about me.

HH: [Definitely wondering what she's got herself into here...]
I ‘met’ my pirate, Jesamiah Acorne on a beach in Dorset, England. How did your author meet up with you two?
Cesco: Pff. What a narcissist. He was pretending to be me.
Pietro: That’s hardly fair. After playing Mercutio several times, he was directing Romeo & Juliet when one line sent him down a rabbit hole of possibility about the origin of the famous feud. He read all Shakespeare’s sources, then moved on to Petrarch and Boccaccio, then noticed that Dante mentions both families. From that moment, he couldn’t not tell this story.

HH: [Glad that was sort of an amicable answer...]
Tell me about one or two of the other characters who feature with you - husband, wife, family? Who are some of the nice characters and who is the nastiest one?
Pietro: Cangrande’s nephew Mastino. He’s the dangerous one. He wants to be Verona’s prince, and is less than thrilled that Cesco here has supplanted him.
Cesco: Figs. Mastino’s a nothing.
Pietro: Discount him at your peril.
Cesco: (ignoring Pietro) I have just a few friends – well, only one, really. My cousin Detto. But I do have loads of rivals, and even some enemies. And there’s this girl…
Pietro: Pardon?
Cesco: Don’t worry. I think she wants to murder me. She definitely wants Cangrande dead.
Pietro: And you’ve fallen for her. Typical.
Cesco: (fuming) Did I say so?
Pietro: You don’t have to.

HH: [Completely understanding why this girl should want to murder Cesco...]
What is your favourite scene in the book?
Pietro: Honestly?
Cesco: No, please lie.
Pietro: There’s a moment when justice is done. Having been unjustly excommunicated - which is completely true - I have the chance to argue my case before the papal court in Avignon, which includes the High Inquisitor Bernardo Gui. Not only do I free a friend and clear my own name, a murderer is revealed and punished. That’s quite satisfying. (Cesco is silent) Cesco? Favourite scene?
Cesco: …I’ll tell you my second favourite. I am kidnapped late in the story, and achieve my own escape. It’s – well, it isn’t easy. But at the end, Cangrande takes me in his arms speaks words I’ve never heard from him.
(beat)
Pietro: He says he is proud of you.
Cesco: You have to spoil everything, don’t you?
Pietro: Forgive me.
Cesco: (grinning) That’s my job.

HH: [I wish I hadn't asked that last question ...]
What are you most proud of about your author? [Do I really want to ask this one?]
Pietro: Giving me a life independent of my famous father.
Cesco: Huh. You know what? I enjoy his wordplay. Or at least the words he gives me to say. I like talking.
Pietro: (throwing up his hands in mock surprise) Ma, non!
Cesco: I also enjoy being smarter than he is.
Pietro: Me?
Cesco: No. The author. I’m much cleverer than he is.

HH: Well, moving on... Has your author written other books about you?
Cesco: Yes, two.
Pietro: Four!
Cesco: Well, THE MASTER OF VERONA is really about you and Cangrande. I’m the MacGuffin, an object, not a character. It’s not until VOICE OF THE FALCONER that I come into my own. Then there’s this one, which is followed at once by THE PRINCE’S DOOM. Those three are actually one big story. One book cannot contain me.
Pietro: There’s also VARNISHED FACES.
Cesco: Pfft. Short stories. They don’t count.
Pietro: I hear he’s working on another novel.
Cesco: Yes, but it’s all about me. You won’t even be in it.
Pietro: We’ll be quits, then, and you can stop pouting.
Cesco: Pouting? I hardly care enough to pout!

HH: [Definitely shouldn't have asked...] How about this one then, guys: As a character, if you could travel to a time and place different to your own fictional setting , where and when would you go?
Pietro: I’d like to go backwards. Talk to Justinian, perhaps. Or maybe Augustus Caesar. The men who created our laws, the rules of our society.
Cesco: Shakespeare’s London. I think I would quite like Christopher Marlowe…

[HH. [Phew what a pair! *laugh*]
Thank you that was really interesting! Now where can readers of this A-Z Blog Challenge find out more about you and your author?