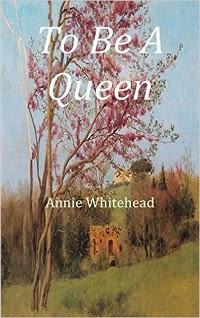 HH : Hello! I believe you exist in Annie Whitehead's  novel – what is the title of the book, and would you like to introduce yourself - who you are, what you do etc?
My name is Aethelflaed, although my family (via my author!) gave me the nickname “Teasel”. My father was King Alfred of Wessex (you might know him as Alfred the Great,) and I’m married to the leading lord in the neighbouring kingdom of Mercia. Annie’s book, To Be A Queen, tells the story of my life. 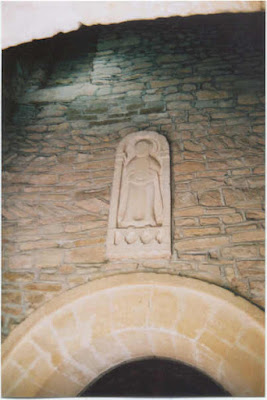 HH : Where and when are you? Are you a real historical person or did your author create you?
I am a real historical person. I was born in about AD869 and I died in 918. Although my father was king of Wessex in the Southwest, I was fostered by my aunt in Mercia in the Midlands and spent almost all of my life in Mercia. I was born into a turbulent time in English history; my father seems to have spent his whole life fighting to saving Wessex and Mercia from the encroaching Vikings, who had already subjugated the other English kingdoms.

HH. In a few brief sentences: what is the novel you feature in about?
To Be a Queen is the book of my life - from my early days as a foster-child in Mercia when the Vikings deposed my uncle the king, to my arranged marriage to Ethelred, who became Lord of Mercia and ally of my father, and then to the time when circumstances saw my having to lead Mercia against the Vikings. I became a queen in all but name as I battled to save Mercia from the Vikings, and from the ambitions of my own brother.

HH :  I ‘met’ my pirate, Jesamiah Acorne on a beach in Dorset, England -  how did your author meet up with you?
She met my husband first. When she was a student her tutor mentioned Ethelred and said that nobody knew exactly where he came from. This intrigued her. She decided she wanted one day to write his story but of course she realised that the real drama was in my life, so she wrote about me (although of course, he still does feature rather heavily in the book!)

HH : Tell me about one or two of the other characters who feature with you - husband, wife, family? Who are some of the nice characters and who is the nastiest one?
I have a brother, Edward, who will one day be king of Wessex and we have a close but difficult relationship. My mother is very frail, having worried about my father and his battles for too long. My cousin thinks that the crown is his by right and is very envious of my brother. Over in Mercia there is a similar character, Brihtsige, who believes he should be the king and that my husband has no authority. He will stop at nothing, not even murder, to get what he wants. One of the nicest characters is the Lord Frith (or Aethelfrith to give him his proper name) - he has lands in both kingdoms and is fiercely loyal to me, and is a great friend when I move back to Mercia to marry and I encounter hostility there.

HH : What is your favourite scene in the book?
Hmm, I have a few, but if I told you about them it might spoil it for those who haven’t yet read the book. I can tell you, though, that one of my favourites is when I save my pregnant friend from a charge by a wild boar. What follows is one of the most affirming moments of my life story.

HH : What is your least favourite? Maybe a frightening or sad moment that your author wrote.
Again, I don’t want to give too much away, but the least favourite moments are the ones - and they are too many - where I experience loss. It makes me and my author tearful just to think about them. Even the place names, Derby, Tettenhall, make me shudder. One of the unkindest blows, which I can probably tell you about, was when an abbot, a friend of mine, and dear to my husband, was senselessly killed. I got rather angry about that, and took an army into Wales to wreak revenge.

HH : What are you most proud of about your author?
That she thought my story worth telling, and that she fought to make it known. Some people promised to make it happen and then let her down, but I’m proud that she didn’t give up on me.

HH : Has your author written  other books about you? If not, about other characters?
How do you feel about your author going off with someone else!
She has written another two stories and she’s published one of them, which  features some of the descendants of the characters in my story, but it’s not a sequel. I’m not too jealous, because I know that she actually wrote “Alvar the Kingmaker” before she wrote my story and that she’s known Alvar, (or Aelfhere to give him his proper name,) as long as she’s known my husband. 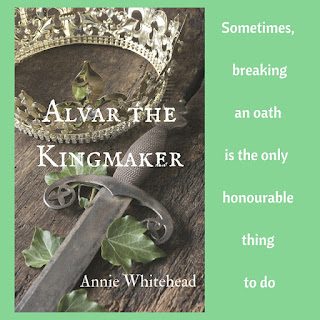 HH : As a character if you could travel to a time and place different to your own fictional setting  where and when would you go?
I’ve heard about a time in the future where a woman really does reign as queen in her own right. I think her name is Elizabeth, her father was a famous king like mine, and she also has a bit of bother with a seaborne invasion, although in her case I believe the enemy are Spanish rather than Danish. I’d like to visit her, to discuss the problems and heartache of being a lonely female leader in a man’s world.
Thank you that was really interesting!

Now where can readers of this A-Z Blog Challenge find out more about you and your author?
Website http://anniewhitehead2.blogspot.co.uk/
Facebook https://www.facebook.com/Annie-Whitehead-Author-566498500155270/?ref=aymt_homepage_panel
Twitter https://twitter.com/ALWhitehead63
Buy on Amazon http://mybook.to/To-Be-A-Queen
http://mybook.to/AlvartheKingmaker