Except to be a little different I interviewed
their leading Character/s...
Today's Character is from : 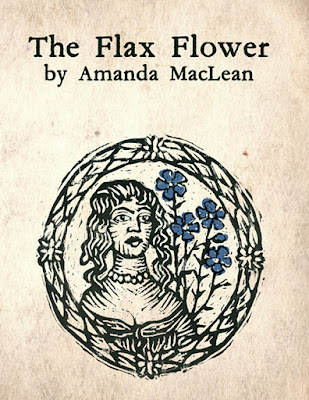 HH : Hello! I believe you exist in Amanda MacLean’s  novel – what is the title of the book, and would you like to introduce yourself - who you are, what you do etc?
What they call the book is The Flax Flower. I dinna ken why they call it that, but anyway a flax flower is the bonniest flower you can have. It’s gey bonny, but it only lasts the one day.
They call me bonny too. And they’ve called me lots of different names. I was Nan or Nannie as a bairn, but I stopped all that and made them call me by my right given name, that’s Agnes. Agnes Smith. But then Andrew came along and he called me Annie, his bonny Annie.
I live in a fine house wi’ four rooms, no like the cottars’ places that have just the one room, because my father’s the Miller o’ Tifty, and a gentleman. I spin and feed the chooks, and I milk the kye and make butter and cheese, and gather reeds to make into wicks for the cruisie lamps. And I do the shearing at harvest time.

HH : Where and when are you? Are you a real historical person or did your author create you?
Well it says 1673 on my grave, where I lie in Fyvie kirkyard. That’s in Buchan, no far frae Aberdeen.

HH. In a few brief sentences: what is the novel you feature in about?
It’s my story, mine and Andrew’s, and what they did to me. These days they say they do that kind of thing for honour, but I canna see any honour in it.

HH :  I ‘met’ my pirate, Jesamiah Acorne on a beach in Dorset, England -  how did your author meet up with you?
Ocht, she heard about me the way all folk hear about me, in the old song that bears my name and tells my story. Only she had been told about the song before she heard it, and then she sought it out to hear it, so I think she was maybe looking for me already. Mill o’ Tifty’s Annie it’s called, or sometimes Andrew Lammie, it doesna matter, it’s the same. It’s one of the big old sad story songs that you would call a ballad, that’s been passed down for three hundred years or more.

HH : Tell me about one or two of the other characters who feature with you - husband, wife, family? Who are some of the nice characters and who is the nastiest one?
There’s Andrew,he’s the Laird’s trumpeter, come all the way frae Edinburgh, but I canna talk about him in case my mother and father hear me. They’re stern as anything, and my father has such a temper on him, I can just see the veins standing out on his temples if he got wind of it. There’s my sisters, and my brother Will, I dinna like him much, he hurts me sometimes. And he drinks.
I like to go down to see old Jess in her cott, it’s a broken down old houf with a coo inside, but there is always singing and stories going on. I like to hear her sing, and she teaches me her big story songs.

HH : What is your favourite scene in the book?
Being down in Jess’s cott at Hallowe’en and dooking for apples, and the guisers bursting in. And the dancing at Hogmanay, wild and wild, to see the New Year in. They were all looking at me then! And any time I see Andrew, when it’s just me and him.

HH : What is your least favourite? Maybe a frightening or sad moment that your author wrote.
Well, there was that time in the kirk when Cat Campbell was on the repentance bench. She’d been with her lad and had a bairn in her belly to prove it. And the Minister was rebuking her, oh God you wouldn’t want to be sitting in her place there in front of all the congregation, the shame of it.
There’s other things. Things I canna talk about. I canna bear it. Maybe I should have held my tongue then, too, but I was never one for that.

HH : What are you most proud of about your author?
Jess used to say to me, when she was teaching me a song, “dinna put too much of yourself into it, just let it tell itself.” I like the way she writes direct, tells my story straight and true, and the way she writes it’s like it’s got a rhythm to it, just like the song it comes from.
She did an awful lot of reading, to find out how things were when I lived, and she found my Andrew hidden away in the old archives. No one knew he was there, but she found him all the same.

HH : Has your author written  other books about you? If not, about other characters?
How do you feel about your author going off with someone else!
There isna much more to tell about me, though they’ve been singing about me ever since.
I hear she is writing about two sisters now, that are in some other song, but I dinna mind because she still remembers me whenever she sings my song.

HH : As a character if you could travel to a time and place different to your own fictional setting  where and when would you go?
I’d go somewhere a long way away, somewhere I’ve never been, like Aberdeen, or maybe even Edinburgh with its castle on the rock. And I’d go to when you are, when you can choose a man for yourself and naebody can tell you otherwise.

If you search for Mill o’ Tifty’s Annie or Andrew Lammie you’ll find all kinds of people singing it, just as good as Jess used to sing. My author sings it too: https://www.youtube.com/watch?v=VbGYGgSry0E

Or you can find out about me in this old chapbook, though it doesn’t get everything right, but it’s a wee bit like the chapbooks my father used to read to me, so I like it. http://www.yourphotocard.com/Ascanius/Mill_o_Tiftys_Annie.htm