Throughout April I have invited 26 authors who had been selected as Editor's Choice by the Historical Novel Society Indie Reviews
to help me out with the 2016 A-Z Blog Challenge...
Except to be a little different I interviewed
their leading Character/s... 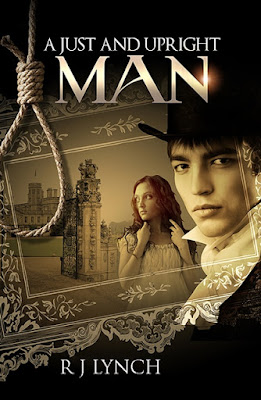 HH : Hello! I believe you exist in R J Lynch’s  novel – A Just and Upright Man, and would you like to introduce yourself - who you are, what you do?
Hello, Helen. My name is James Blakiston, I’m in my twenties and I’m Land Agent on the estate of Lord Ravenshead in County Durham in the north-east of England. Really, the work is a backward step for me; my father was a landowner in Dorset, though not on such a scale as Lord Ravenshead, and I expected to inherit eventually and to live there with a wellborn woman s my wife, but my father invested foolishly, lost everything he had and ended his life in the Marshalsea, a debtor’s prison. A cousin spoke to his Lordship on my behalf and I was taken on in this position; my younger brother joined the Navy as a midshipman. Things were worse for our sister; she is now a governess and I’m afraid she doesn't really like children. But that’s how life is; you take what it hands you and make the best of it.

HH : Where and when are you? Are you a real historical person or did your author create you?
It’s the mid-1760s and I’m afraid Durham is a rough sort of place compared with my Dorset home, but I’ve come to love it here. It was my author who brought me into life and I must say I’m grateful to him.

HH. In a few brief sentences: what is the novel you feature in about?
Well, now, that’s an interesting question, especially given my background as gentry. John Lynch is my author and he has always loved historical fiction but instead of writing about the aristocracy and the gentry – people like me – as so much historical fiction does he wanted to show the lives of the working poor. Agricultural labourers, coalminers, people without education who live a precarious life from day to day. I’m face-to-face every day with farmers who are raising themselves into the middling sort but also with day labourers and people for whom there is no work at all. And it’s been fascinating. And… Well… This is a bit personal, Helen, but I fell in love with a labourer’s daughter. Lizzie Greener. A spirited girl. Of course, it’s impossible and I know that… There’s a neighbouring landowner who has an unmarried female cousin and he wants to settle £500 a year on me and have me wed the woman and live in Hoppyland Hall which is one of his properties. Obviously, for a man in my position that’s the thing to do. I’d be restored to something like the life I’d expected and I’d be received in society. But still… And then there’s a murder, well, two murders in fact, and it falls to me to find the person responsible.

HH :  I ‘met’ my pirate, Jesamiah Acorne on a beach in Dorset -  how did your author meet up with you?
As far as I can tell, I just met a need. Some writers are like that, you know. They think, “How am I going to tell this story,” and they decide they need a particular person and, boom! There you are. Born out of nothing. What I think is that he wanted to show how life looked to the people at the very bottom of the heap and he decided the best way to do that was to have someone who’d been born into the gentry and fallen far enough to be able to examine the lives of the poor in a way that most people like me would never do. It’s amazing, you know, but the poor can be invisible to the well off. The rector, for example, simply doesn’t see them. But I have to say, his wife is an example to us all. But there you are, you see: she was born the daughter of a common seaman who became a sea captain and she brought the rector a thousand a year, so she straddles both classes, too. 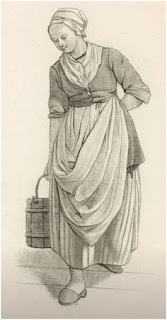 HH : Tell me about one or two of the other characters who feature with you - husband, wife, family? Who are some of the nice characters and who is the nastiest one?
Well. I really feel I shouldn’t be saying this, but of course there’s Lizzie. Lizzie Greener. Lizzie was born into the lowest class and in the life I was born to I don’t suppose I’d ever have noticed her, but she really is the most captivating person I’ve ever met. If I’d expected anything, which I didn’t because I never thought about it, it would have been that the poor would be ground down with all spirit extracted from them, but Lizzie… Lizzie is an example to us all of how indomitable a human being can be.
Then there’s Tom Laws. A farmer’s son, but the second son so not much of a life in store but then he gets a chance and he takes it. Tom is the kind of young man a father would be proud to acknowledge.
And, of course, the rector. He is a snob who doesn’t know he’s a snob, but we’ve become good friends.
The nastiest character? Well, I suppose I should say the Earl of Wrekin because he mistreats Lizzie’s older sister in the most shameful way and I suppose he really isn’t very nice, although it’s perhaps not for me to criticise my employer’s son. Really, though, I have to pick out as the most unpleasant character in the book the owner of Matfen Hall who wants me to marry his cousin and go to work for him. The way he treats people he sees as beneath him… Well, it’s disgraceful. And he simply doesn’t see that he is doing anything wrong.

HH : What is your favourite scene in the book?
There are so many. I suppose, though, the one in the dairy has a special resonance for me. The one where I’m giving Lizzie a job to do and I’m so close to her I could reach out and touch and I want to do that so much I’m quite giddy. And then there’s the one where I come across her and she’s walking to the place I’m going to and I seize her round the waist and lift her on to Obsidian, my horse, and carry her there and she’s so close to me… So close. 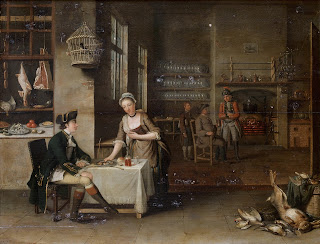 HH : What is your least favourite? Maybe a frightening or sad moment that your author wrote.
Well, either of those that I listed as my favourites could also count as my least favourite, because I so much wanted to take her hand and tell her how I felt. And, of course, I couldn’t do that. What would people say? But probably the hanging scene, where they hang that poor boy for taking rabbits – that was dreadful. And so real.

HH : What are you most proud of about your author?
He has the most remarkable sense of people. There are a lot of characters in this book, and every one of them is fully rounded. You see the good and the bad and you understand who they are and why they do the things they do.

HH : Has your author written  other books about you? If not, about other characters?
How do you feel about your author going off with someone else!
Oh, he has, and he’s writing more. A Just and Upright Man was the first in a series of five and he’s called the series The James Blakiston Series, which makes me very proud. The second book in the series is Poor Law and I have a starring role and it will be out in paperback in April this year.
[Helen - HNS Indie looks forward to reviewing it!]

HH : As a character if you could travel to a time and place different to your own fictional setting  where and when would you go?
Well. There’s a question. I think, you know, that what I really would most like is to keep the time the same – the 1760s – but go to the colonies in America because things are starting to hot up there. We’ve got King George and I know it really isn’t my place to disparage a king but if I were going to be really honest, I’d have to say that King George III is little short of an imbecile. I don’t think he or the people he has around him understand the feelings of the colonists. I suspect it may come to war and if it does it will be a civil war between English people on this side of the Atlantic and English people on that side of the Atlantic and, you know, civil wars are the worst kind of war. But please don’t tell anyone I said that about His Majesty. The author has hinted that I may see the Americas in book three of the series. I hope I do.
And if I really have to change time as well as place, I’d like to go back to 1415 and fight with Henry at Agincourt. What a magnificent victory that was! The English were completely outnumbered and the arrogant French believed they’d destroy them but in fact it was the English longbowmen who wrought the destruction.

Thank you that was really interesting!
Now where can readers of this A-Z Blog Challenge find out more about you and your author?
Website
Facebook
Twitter  @jlynchauthor
Blog
Buy onAmazon