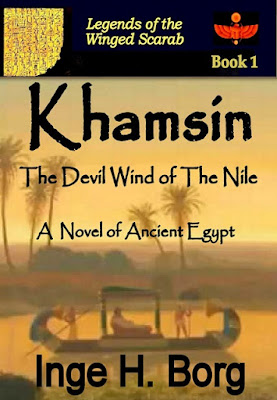 Interview with Princess Nefret,
Royal Daughter and Heiress to Hor-Aha,
Second Horus-King of the First Dynasty of Egypt

HH :  Hello! I believe you exist in Inge H. Borg’s KHAMSIN, The Devil wind of the Nile, A Novel of Ancient Egypt.
Nefret:  I do indeed. My name is Nefret. It means ‘beautiful.’ I am, if I say so myself. At the time my story is being told, I am only 15 1/2 years old, and about to be formally introduced to my father’s court as his Royal Heiress. Father is King Hor-Aha, Second Horus-King of the First Dynasty of Egypt, successor to the legendary King Narmer. https://en.wikipedia.org/wiki/Hor-Aha#Successor_to_Narmer 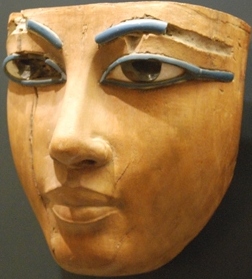 HH :  Where and when are you? (i.e. time and place of the novel) Are you a real historical person or did your author create you?
Nefret: We lived in the newly built palace compound at Injeb-hedj, the City of White Walls, just south of the widespread delta the Rivergod Hapi had carved out for himself before pouring into the Great Green. My author, who saw fit to endow me with a sinner’s soul that was yet to endure many other storms and cataclysms, gives this as the year 3080 BCE. 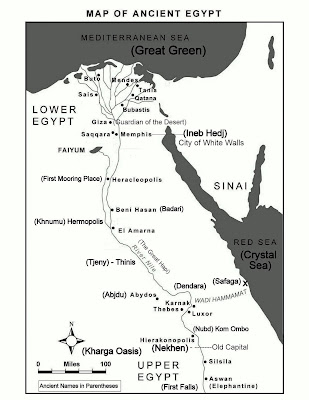 HH : In a few brief sentences: what is the novel you feature in about?
Nefret: While this saga of Ancient Egypt is comprised of several intersecting stories about greed, court intrigue, warfare, and mysticism, it is my forbidden love for the young surgeon-priest Tasar that leads to my terrible transgression against our strict laws of Ma’at, punishable by a cruel death.

HH :   I ‘met’ my pirate, Jesamiah Acorne on a beach in Dorset, England -  how did your author meet up with you? (i.e what gave your author the idea to write about you)
Nefret:   I believe my author literally picked me out of the blue after a chance suggestion. Not very royal of her, I’d say. I still have a bone to pick with her for all my suffering.

HH :  Tell me about one or two of the other characters who feature with you - husband, wife, family? Who are some of the nice characters and who is the nastiest one?
Nefret:  I love Tasar, the handsome young surgeon-priest. I also love Ramose—he was like a father to me; until he ignobly sends me scurrying into the desert like a hunted gazelle. He says it’s to save my life—really? After he condemns me to death and pours my death mask to fool everyone into believing I had died?
From the beginning, the scourge of my father’s court is Ebu al-Saqqara, the treacherous Vizier (a lowly man from a family of grave diggers at Saqqara). He actually tried to persuade Father I should become the vile man’s wife (he doesn’t even like women). But my half-brother Dubar is actually the one who changes my fate forever.

HH :  What is your favourite scene in the book?
Nefret:  When I first lure Tasar into my bed chamber, I tell him I am a slave to the royal princess. After he changes me from girl to woman, I then tell him I am a virgin consecrated to Ramose, the High Priest of Ptah. That shakes him up to no end. That may not have been kind; but I am given to being quite mischievous.

HH : What is your least favourite? A frightening or sad moment that your author wrote.
Nefret:  I don’t want to give the plot away, but when my deranged half-brother Dubar assaults me and pries my mouth open with his disgusting tongue, I bite it almost in half. After that, in a frenzied rage, I do something much worse for which even the powerful Ramose cannot protect me.

HH :  What are you most proud of about your author?
Nefret:  How she takes real places (with their old Egyptian rather than Greek names) and then weaves some historical events smoothly into her stories. She also gives my soul, my eternal Ba, a hint of salvation in her four subsequent books. But for now, I can only hope…

HH :  Has your author written other books about you? If not, about other characters?
Nefret: There are four modern-day sequels to KHAMSIN, all with strong connections to me through my death mask (and old soul). Just to get even, I am having a bit of fun torturing the ‘new me’ endowed with my sinner’s ba. 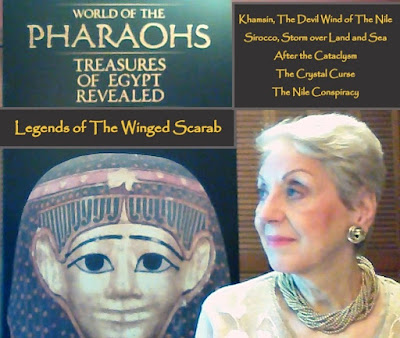 HH:  How do you feel about your author going off with someone else!
Nefret:  At first, I felt betrayed. But when the ‘new’ character is half-Egyptian, very pretty as well, and called Naunet after a mythical Egyptian Red Sea goddess, I try to help her to overcome the storms raging in her soul, especially during those desperate times when she is drawn to join me in the Field of Rushes.

HH : As a character if you could travel to a time and place different to your own fictional setting  where and when would you go?
Nefret: Ah, but that’s just what I am doing in Sirocco, Storm over Land and Sea. Followed by After the Cataclysm, The Crystal Curse, and The Nile Conspiracy (all through the soul of the beautiful archaeologist Naunet Wilkins).
The question is: Will she and I at last find peace on this earth? We hope so, for as the great Ramose said: “The end is but a new beginning for the eternal soul.”

Now where can readers of this A-Z Blog Challenge find out more about you and your author?
Check out Khamsin and its Sequels:
Amazon-US
Amazon-UK
http://twitter.com/@AuthorBorg
http://devilwinds.blogspot.com/

* * *  And as an aside.... Happy Birthday Helen
who has had 63 years of loving listening to stories today!