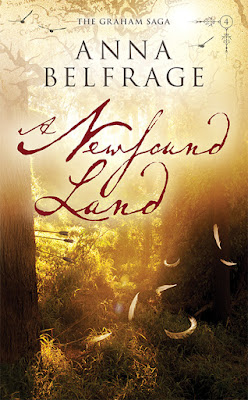 HH : Hello! I believe you exist in Anna Belfrage’s  novel – what is the title of the book, and would you like to introduce yourself - who you are, what you do etc?
Hi Helen, I’m Alex Graham and let me start by saying how nice it is to finally meet you – any chance of having a brief tête-à-tête with you pirate, that gorgeous Jesamiah fellow? No? Too bad. (Alex - call back in a couple of day's time .. P will be for Pirate Code...) It’s just that Anna goes on and on about him…Anyway: very briefly about me, I’m the protagonist of Anna’s A Newfound Land (the fourth of The Graham Saga) – together with my husband, Matthew. I should never have met Matthew, seeing as he was born three centuries before me, but as I tend to repeat ad nauseam he’s the single, biggest benefit to having been dragged back in time. And no, before you ask, I do NOT want to time travel again. Ever. Instead, I want to remain here in my new time with my new family, even if at times the sheer drudgery of life in the 17th century gets to me. I seem to work non-stop from the moment I get up to the moment I fall into bed.

HH : Where and when are you? (i.e. time and place of the novel) Are you a real historical person or did your author create you?
I am a created character – but if you ask Anna, she’d say I’m as real as they come. Let’s just say I am very, very good at making my presence felt in Anna’s head. In A Newfound Land I am fortunate enough to remain in the 17th century throughout – and in Maryland.

HH. In a few brief sentences: what is the novel you feature in about?
In A Newfound Land Matthew and I have only recently arrived in Maryland, having fled religious persecution in Scotland. Establishing ourselves as settlers in the inland wilderness of Maryland is not a walk in the park, let me tell you, even less so when one has to deal with Indians, unexpected guests from our past (and future) and the horrible, horrible Burley brothers. Violence simmers under the surface, and here was I hoping that by moving to this brave new world we’d find some peace of mind…

HH :  I ‘met’ my pirate, Jesamiah Acorne on a beach in Dorset, England -  how did your author meet up with you? (i.e what gave your author the idea to write about you)
She met up with Matthew first, I think. Anna tends to be a bit vague about this, probably because I have to suppress a desire to claw her eyes out whenever she gazes at my husband as if he’s hers. Well, I suppose he is hers in a way – but not in that way. Anyway, Matthew popped up as a consequence of Anna researching the history of her husband’s family – they fled Scotland for Sweden in the 17th century due to religious persecutions. But to add some spice to the story – and ensure Matthew didn’t develop into a rigid bore – she decided he needed me in his life. I was already lurking about in her head by then, a young woman in tight jeans *looks down at her heavy woollen skirts and sighs. Loudly.* with a yearning for adventure. I never said I wanted to time travel. In fact, I don’t believe one can time travel, but there you are, here I am – with my Matthew.

HH : Tell me about one or two of the other characters who feature with you - husband, wife, family? Who are some of the nice characters and who is the nastiest one?
Other than me, Matthew is the protagonist of The Graham Saga. Dark-haired, tall and gifted with the most beautiful eyes I’ve ever seen – they’re a light hazel, shifting between gold and green – he is a devout Presbyterian which at times leads to quite the spirited discussions. Quarrels, Matthew would call them: I call them an interchange of ideas. He is also – unsurprisingly – rather old-fashioned, and like almost everybody else in this time and age he is of the opinion that it is the husband who has final say on most things. However, years of rubbing along with me have taught him it is smarter to involve me than exclude me, and only rarely does he commit the mistake of taking decisions over my heads. Like regarding that obnoxious narrow-minded misogynist Richard Campbell whom he invited to stay and teach our sons. Did not go down well…
Fortunately, Matthew has other sides to him. He is tender and loving, will go to any lengths to protect me and our children. Adept with sword and musket, he is an excellent horseman and has a well-developed sense of right and wrong – which is why we end up embroiled in this feud with the Burleys. Matthew would not countenance them abducting Indian women, no matter that other colonists shrug at the fate of the heathen. I love that about him – how he stands up for the weak and defenceless. Well, to be honest, I love almost everything about him.
The nastiest? Well Dominic Jones is one very big rotten apple, but he can’t hold a candle to Philip Burley.

HH : What is your favourite scene in the book?
My favourite scene? There are so many… But I think it’s the scene when Matthew returns after his months in the militia. It was early, sunlight glittering in the thin layer of snow, and I’d just been to the privy when I saw him come riding down the lane. Tired, bearded and dirty he was still whole, still my man, albeit marked by what he’d seen and done. And the way he looked at me, the way he crushed me to his chest…*shivers happily*

HH : What is your least favourite? Maybe a frightening or sad moment that your author wrote.
Whatever scenes include Philip Burley have me quaking with dread. There is something seriously off about that man, starting with his eerie eyes, so light they look almost white at times.

HH : What are you most proud of about your author?
That she perseveres. People who don’t know her all that well may think Anna is hard as nails. She is outspoken, direct, opinionated – sheesh, she sounds like me – she is also something of a perfectionist and has like half a dozen mini-Luthers on her back keeping her nose to the grindstone. She delivers. And delivers. But deep inside she struggles with just as much insecurity as the rest of us, and given how much of herself she has poured into her books, she inevitably takes things to heart and has periods of intense self-doubt. Yet somehow she always gets back up. Always. I think it is a quality most writers share – more or less.

HH : Has your author written  other books about you? If not, about other characters?
How do you feel about your author going off with someone else!
Oh yes, Anna has written in total eight books about me and my family. Of late, she’s been ignoring us, what with being stuck in the 14th century sorting out all the adventures and misfortunes Adam de Guirande and his wife Kit have to handle in connection with Roger Mortimer’s rise to power. I really like those two – Adam and Matthew get on like a house on fire when they get together. BUT. Helloooo! We’re still around, Mrs Belfrage. Fortunately, she seems to have picked up on the fact that we have a lot of things happening in our lives which is why she has started work on a new Graham book.

HH : As a character if you could travel to a time and place different to your own fictional setting  where and when would you go?
Uh-uh. Nope. I’ve done what time travelling I want to do, thank you very much. I am happy to live and die – but not yet – here in the 17th century. I wouldn’t mind visiting London though – I could drive Matthew crazy by making comparisons between my London as I recall it from the late 1990s and this London. 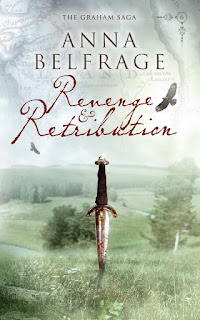 Now where can readers of this A-Z Blog Challenge find out more about you and your author?
Website:  http://www.annabelfrage.com
Facebook:  https://www.facebook.com/theAlexandMatthewstory/
Twitter:  https://twitter.com/Anna_Belfrage
Blog:  https://annabelfrage.wordpress.com
Buy on Amazon:  http://myBook.to/TGS

Coming soon from Anna Belfrage:
Days of Sun and Glory
the second book in The King’s Greatest Enemy 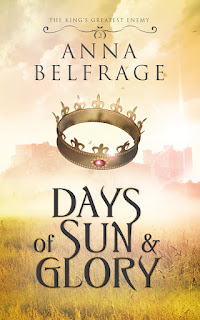 So call back tomorrow
To meet the next exciting Character!
(unless it is Sunday - in which case, I'll have something different
but just as interesting !
And as it happens it will be another article by Anna about
her new venture!)