Z is for... OZgur Sahin's Wrath of Brotherhood

Throughout April I invited 26 authorswho had been selected as Editor's Choice
by the Historical Novel Society Indie Reviews to help me out with the 2016 A-Z Blog Challenge...
Except to be a little different  interviewed
their leading Character/s...
Today is the Last Character and is from : 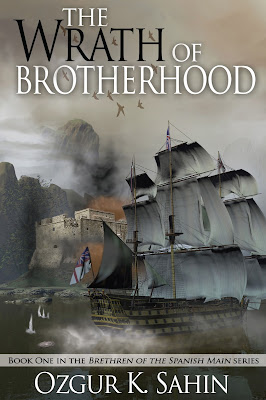 HH : Hello! I believe you exist in Ozgur’s  novel – what is the title of the book, and
would you like to introduce yourself - who you are, what you do etc?

My name is Coya.  I am still learning how to read, but my friend Jan has told me the book is called The Wrath of Brotherhood.  I would like to read it so I can understand these strange events more, but I only encountered English for the first time a few years ago when the Englishmen came in their ships to take Jamaica away from the Spanish.  I grew up in the jungles and mountains of what the Spanish call New Granada.  My people fled the fall of the Incas and the dominance of Spain to the west many generations ago, but the Spanish found us at last and destroyed my village, among others.  I was thirteen years old, but I survived in the wild and made my way to the outskirts of Cartagena.

The families in our village all had excellent sight at night, and this helped me to escape and make a living thieving from the Spanish.  I hate that I must do this, but I have little mercy for the Spaniards, whose language I had to learn to survive. I was overjoyed when, after stowing away aboard a tall ship bound for Santiago de la Vega, I finally witnessed a Spanish defeat by the wonderful English people when they took the port and renamed it Cagway, or Port Royal. When I met Captain Roy Toppings, he saw my abilities in a way I had never considered, and he invited me to join his crew as a scout.

HH : Where and when are you? Are you a real historical person or did your author create you?

I don't understand the European calendars much, but it is May of the year 1660.  I know this because the sailors of Port Royal never cease talking about when someone named Charles‒seemingly the second one, though I've met others named Charles here‒will come to England to rule at the beginning of next month.  At least it was the beginning of May when we left Port Royal in Jamaica.  Since then I have spent much time in Curaçao and along the coast of New Granada (what you call South America) from Caracas to Coro.  I and my village were created from nothing by the author.  I am saddened that my village, which I felt such grief for losing, never truly existed. 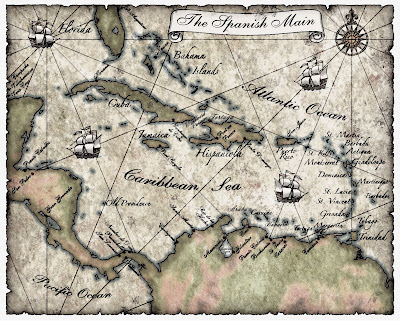 HH. In a few brief sentences: what is the novel you feature in about?

The motivation for many of us seems to be revenge‒especially for Captain Roy Toppings and for me.  But it seems to me now that both of us are mistaken in some part of our revenge.  His will lead him to a bad place, if the Spanish invasion we became involved with is any kind of omen, but now I feel mine is perhaps satisfied.

HH : I ‘met’ my pirate, Jesamiah Acorne on a beach in Dorset, England -  how did your author meet up with you?

My creator had a need in this world for many different views and experiences among his crew.  Mine was a unique view to him, and a unique set of skills.  And yet the other Brethren of the Coast ARE my brothers because we are all aboard The Constance to reach beyond mere survival in a world being strangled by Spaniards.

HH : Tell me about one or two of the other characters who feature with you - husband, wife,
family? Who are some of the nice characters and who is the nastiest one?

There is my friend, the surgeon named Jan.  He understands my situation somehow, though he has never shared my experiences.  Of course Captain Roy Toppings, who saved me from my life alone in the wild.  I feel much gratitude and respect for him, but I worry about him also.  Ajuban, his first mate, shares much in common with me because he was a slave owned by Spaniards before Roy freed him.  I don't know about nasty characters.  All Spanish are my enemies...but there was the Dutch merchant captain, Marius Gilbertsen.  No one has anything good to say of him, and I feel I have not seen him for the last time.  And there is Major Manuel Benito.  He is now our prisoner, and he has worked against us, but for some reason, I also respect him, and I do not know how to feel about that.  My crewmate, Daniel, he looks at me in a way that I do not like at all.  He is the only crewmate I do not feel I would mourn.

HH : What is your favourite scene in the book?

There are many I remember with joy.  However, as unpleasant as it was to participate in, I am very proud of the part I played in the final battle.  I was in the hold of an enemy ship, and all my information came from what I could hear.  I had a vital task to perform, and I succeeded.  Now that I think on it, that was the true moment when my vengeance was granted.

HH : What is your least favourite? Maybe a frightening or sad moment that your author
wrote.

Before the scene I just told you about, I didn't know it at the time, but it was revealed why my friend Jan was really part of our crew.  He should have no need for the wage‒he was a skilled city surgeon.  When William read his notes back to me and I learned Jan's true reason, I was deeply saddened and I didn't want him to read any more.

HH : What are you most proud of about your author?

HH : Has your author written  other books about you? If not, about other characters?

He has just finished writing the first version of another book with me in it, but I don't yet know what it will be called.  I am almost afraid to read it.  I have many worries about Jan and about the Spaniards, but most of all I have worries about Roy.  I think he is in a bad place now, and I don't want it to get any worse.

HH : How do you feel about your author going off with someone else!

I think if he can do for other characters what he has done for me, can improve their lives the same way, it will be good for us all.  I have had enough good fortune to worry over these things.

HH : As a character if you could travel to a time and place different to your own fictional
setting  where and when would you go?

I am still exploring the wonders and terrors of this place!  I cannot imagine how to answer such a large question.  I would like to see how my ancestors truly lived, and I would like to one day see the museums in Spain where I hear the relics of my people are once again revered by scholars.  But I would love to see the future one day, when men have mastered the underworld and the middle world of men, and begin to explore the sky and the world of the gods.  And I would like to see magic as my parents once told me of‒just once before I die.

Thank you for joining us
it's been a blast!