V is for...Victoria Blake's Far Away 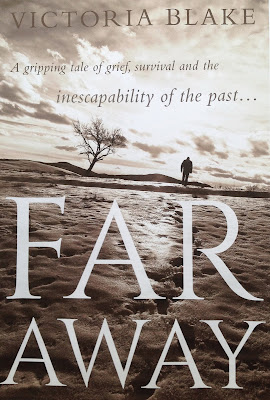 HH : Hello! I believe you exist in Victoria Blake’s  novel – what is the title of the book, and would you like to introduce yourself - who you are, what you do etc?
The title of the book is FAR AWAY. My name is Michael Armstrong and  when the book starts I’m an officer in the Royal Artillery during the Second World War and I’ve been captured at the fall of Tobruk in Africa and imprisoned in an Italian POW camp. Before the war I’d been studying PPE and law at Oxford. 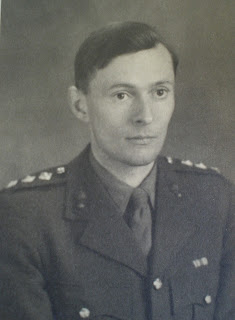 HH : Where and when are you? Are you a real historical person or did your author create you?
I’m imprisoned in a POW camp in Capua, Italy in 1942 then I’m moved to Chieti and finally Sulmona from which I escape in 1943. The author might like to think she created me  but since I am a character based loosely on her  father, Robert Blake, I think it would be more appropriate to say that I created her! Incidentally Sulmona is now the confetti capital of the world.

HH. In a few brief sentences: what is the novel you feature in about?
It is about the friendship between two men who meet in a POW camp in Italy during the Second World War. I’m the son of a Norfolk teacher and have just come down from Oxford with a first. Harry Maynard is the son of a Hull tram conductor, a published crime writer and teacher. The book paints a vivid and compelling portrait of the lives of POWs in Italy and the Italians who risked their lives to save them. It is about grief, survival and the inescapability of the past.

HH :  I ‘met’ my pirate, Jesamiah Acorne on a beach in Dorset, England -  how did your author meet up with you?
I used to tell her stories of my escape – wolves howling, snow covered mountains in the Abruzzi etc when she was a child so I suppose the idea for this fictional version of me came from that and too many viewings of The Great Escape and The Wooden Horse. We did take her to see Where Eagles Dare when she was rather too young, so maybe she’s mistaking me for Richard Burton. Her mother was always elaborating on the actual story so I think that’s what has led to this book. If I’d known she was going to be a novelist I’d have kept my mouth shut! Having a novelist in the family is a profoundly irritating thing.
[HH - as an aside, my father was a POW at the Stalag where the Wooden Horse happened - remember the sandbags being emptied down the men's trousers? Dad helped with that. I'm not sure if he helped acually dig the tunnels, but I suspect he did.)

HH : Tell me about one or two of the other characters who feature with you - husband, wife, family? Who are some of the nice characters and who is the nastiest one?
Harry Maynard is my friend in the book and we escape from the POW camp together. He is already a published writer when the war breaks out. I convince him to write side by side in the same notebook with me. He writes a fairy story and I write an account of my war up to that point. Harry cares deeply about his men and doesn’t like being separated from them. At this stage he is a much more political person than I am and has a more developed social conscience. The nastiest character is probably Harry’s sister, Rose, depicted in old age. She is short tempered and rather disagreeable but this is mainly because she is very elderly and in a care home and waiting to die. She’s not really nasty, more worn out and depressed by old age. Maybe the most difficult aspect of her character is that she’s held onto a secret her whole life about her daughter, Clare’s, parentage.

HH : What is your favourite scene in the book?
I like the scene where my character and Harry are sharpening and then heating up the points of twigs in order to kill the bugs which infested the planks of our beds. It’s in that conversation that I persuade him to write something with me so it’s the trigger for the fairy tale in the book.

HH : What is your least favourite? Maybe a frightening or sad moment that your author wrote.
No soldier will ever forget the moment they surrendered also I wasn’t particularly happy to see my own death depicted.

HH : What are you most proud of about your author?
She’s determined. She knows how to keep on keeping on or KBO as Churchill used to say.

HH : Has your author written  other books about you? If not, about other characters?
How do you feel about your author going off with someone else!
There was a scene in one of her crime novels, Skin and Blister, when she gave a most disloyal depiction of the inside of my study. Yes, I would like to say, I do know books are a fire hazard but as you know perfectly well that particular electric fire was never ever used so there was no harm in leaning books against it. Incidentally the state of her room today is an absolute disgrace so the term pot and kettle come to mind. I hope to God this will be the only book with me in it.  Frankly, I feel it’s about time she does go off with someone else. In fact I know she already has. She is now flirting with that egotistical rogue, poet and pornographer Pietro Aretino in Renaissance Venice.

HH : As a character if you could travel to a time and place different to your own fictional setting  where and when would you go?
Well, I wouldn’t mind being alive now although that would make me 99. Having taught politics for most of my life I’d have something to say about this Euro referendum, that’s for sure and I’d like to be put down in Downing Street to knock their heads together. If not now I wouldn’t mind being alive during Benjamin Disraeli’s lifetime. I wrote a biography about him and I’d like to hand him the book, wait until he’s read it and then ask him if I got him right. Every biographer fantasizes about that scenario.