M is for... Murder at Cirey 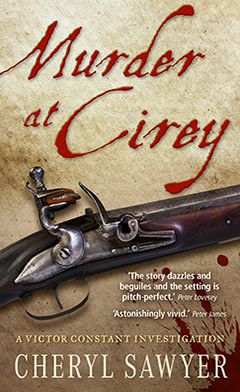 HH: Hello! I believe you exist in Cheryl Sawyer’s novel. What is the title of the book, and would you like to introduce yourself?
Thank you for the chance to present myself to an audience of quality—this doesn’t usually happen to a cavalier (private) in France’s eighteenth-century mounted military police. Unless, of course, I’m taking a nobleman into custody. In Murder at Cirey I feared I’d have to do just that, and I was reluctant, because arresting a Parisian aristocrat got me banished to the remote Champagne countryside in the first place. I’m honoured to meet you. I am Cavalier Constant of the Maréchaussée.

This cavalier of the 18th-century military police in France is depicted in dress uniform. I can tell you that our rural brigade were not togged out as lavishly as this, for the simple reason that we had to buy our own uniforms out of our pay, which was crushingly modest. I prefer to spend money on the things I value, such as my horse and my weapons—and I always send some pay back to Paris to help support my three sisters. However, subtract the wig, the aigrettes on the shoulders and the moustache, and here you have me, Victor Constant, with reasonable accuracy.

HH: Are you a real historical person or did your author create you?
My existential status is between myself and my Creator, and I doubt if you’ll find me in the history books. However, two of the people in the novel are not only real but famous: Madame du Châtelet, marquise, mathematician and Newtonian physicist, and her lover, the poet and philosopher Voltaire, both of whom were living at her country château, Cirey, at the time.

HH. In a few brief sentences: what is the novel you feature in about?
It all happened over eight days in spring, 1735, and it was a race against crime. When a handsome young man was shot dead on the Cirey estate in the picturesque Champagne countryside, I was called in to examine the victim. But no one, including the local magistrate, seemed keen to penetrate the mystery of his brutal death. Alone and against orders, I confronted the notorious free-thinker, Voltaire, who found the body (frankly, I also considered him a suspect). Then a beggar was wrongly accused of the murder and I had to fight on alone to bring the real killer to justice. A second murder occurred and I was in double danger: unless I could strip bare the conspiracy behind this intricate series of crimes, I stood to lose my military career—and my life.

HH:  I ‘met’ my pirate, Jesamiah Acorne, on a beach in Dorset, England - howdid your author meet up with you (i.e. what gave your author the idea to write about you)?
Cheryl Sawyer thought of me after being shown over the Château de Cirey by the Comtesse de Salignac-Fénélon, the present owner. This lovely estate used to belong to the Marquise du Châtelet. Cheryl was fascinated by one day in June 1735, when Mme du Châtelet came to live there with Voltaire, and she wondered how they would both have reacted if a mysterious body were discovered that very morning in the Cirey forest. She realised I was on a patrol in a nearby town at the time, so she had me called in. I don’t know whether to thank or curse her for that! 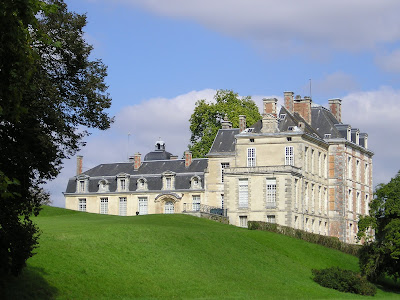 Cheryl tells me she ‘took’ this picture of Cirey from the banks of the Blaise, the little river that flows past the château. On the left of the building is the new wing that Voltaire constructed, with his apartments at the end. You can see Cirey ‘online’ (another mystery that Cheryl has yet to explain to me) here: http://www.chateaudecirey.com/

HH: Tell me about one or two of the other characters who feature with you. Who are some of the nice characters and who is the nastiest one?
I’ll start with the nastiest one, who is of course the murderer. He is just the kind of man (he would call himself a gentleman, but he doesn’t deserve the title) whom one meets in the top echelons of provincial society, and who takes advantage of his position to feather his own nest and treat everyone with contempt. This one is also intelligent enough to be a cunning conspirator, and ruthless enough to frame his associates for his own crimes. I finally got the measure of him—but I was nearly too late! At the opposite end of the aristocratic spectrum is Mme du Châtelet. But I wouldn’t describe her as ‘nice’, exactly. ‘Spectacular’ is perhaps the word. Here is the impression she made on me when she kindly offered advice on my detective work.

‘Victor took the cue and rose to his feet. He would have preferred to stay and continue the conversation that Madame du Châtelet had carried on with such verve and grace. Her presence and her musical voice animated the room, influencing the currents of feeling and thought in startling ways. Her figure was perfect. Her face, with its well-defined features and glowing eyes, had great powers of expression and she was dressed with a flair that set off her distinctive beauty. But it was not just her person that dazzled him, it was her sheer vitality.’

HH: What is your favourite scene in the book?
The one above, because it was so extraordinary: I believed I was quite alone in my fight for true justice, but these two people, whom I had come to Cirey to challenge and confront, astonished me with their desire to help (or interfere!)!

‘Overwhelmed, Victor set out on the long ride back to Joinville. It had been a topsy-turvy experience: an interrogation during which almost every question had been put by either Voltaire or Madame du Châtelet, and where the lady had shown the more scientific mind. He would have been hard put to describe the encounter to anyone else. He might have said that he had just taken part in a conversation between a man and his mistress—but that hardly began to outline the situation at Cirey. Perhaps Voltaire’s fanciful tirade outside the kitchen had seized its true character, and there was something magical and mythical about the life he and Madame du Châtelet were creating together. There was everything to divide them: birth, rank, her marriage and his age—for he was just over forty and she just under thirty—yet their protectiveness towards each other, the more powerful for being unspoken, proved how united they were.’

HH: What is your least favourite? Maybe a frightening or sad moment that your author wrote.
All I will say here is that I do not like getting shot. Four years in the cavalry—fighting for France in northern Italy—and a couple of years in the Maréchaussée, have not made me at all philosophical about receiving bullets in the chest.

HH: What are you most proud of about your author?
That she refrained from killing me off in the first novel. I’m young and ambitious, and there are more crimes to solve in our deceptively enchanting rural region (and, for that matter, in Paris, if I ever get transferred back home). The next Victor Constant investigation is Death in Champagne.

HH: Has your author written other books about you? If not, about other characters? How do you feel about your author going off with someone else!
I hope there will be many further books about me. As I mention, with emphasis, this entirely depends on my staying alive. Promotion to brigadier would be good, too, just as a start. Cheryl occasionally dallies with other heroes but these fellows, being English or American, really don’t count. 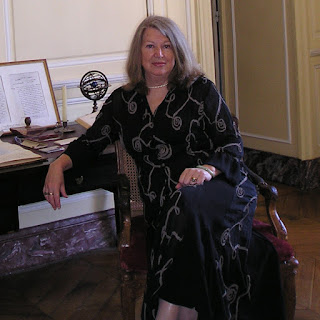 Cheryl Sawyer is the maiden name and nom de plume of Cheryl Hingley, a former publisher of fiction and non-fiction, who has had eight historical novels published by Penguin, Random House, Bertelsmann, Endeavour Press, Via Magna, Mir Knigi, Reader’s Digest and others. She maintains the critique blog for fiction writers, Free Literary Mentor: http://www.cherylhingley.com/
Here, she is sitting in one of the rooms devoted to Mme du Châtelet, created by descendants of the lady’s family at the Château de Breteuil, where Cheryl once lived and worked.

HH: As a character, if you could travel to a time and place different from your own fictional setting, where and when would you go?
In a few years’ time I should like to travel the world like Monsieur de Voltaire’s character, Candide (it has to be in a few years’ time because he hasn’t written the story yet :). But I would make better use of my travels than Candide, who has a wide-eyed view of everything. Life has given me a much more cynical attitude towards human behaviour. But I do not lack compassion. I agree with what Monsieur de Voltaire wrote in one of his plays:
Those earthly laws that mend the misery of others
Make sympathetic humans a great band of brothers.